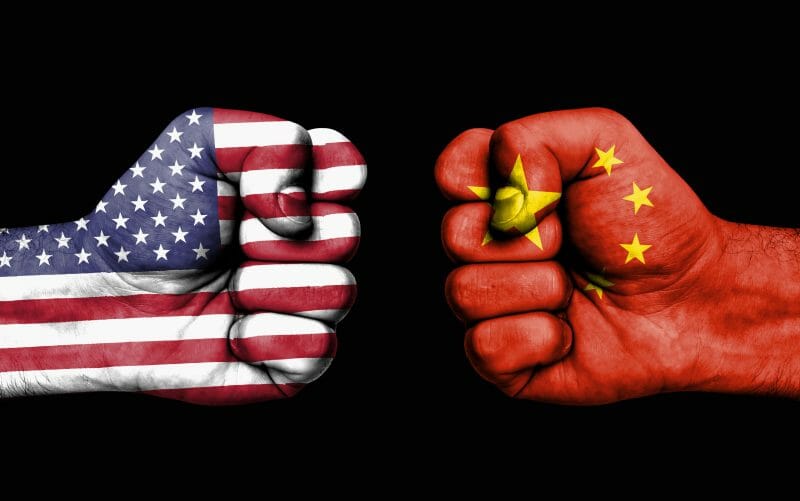 After the calm of 2017, 2018 is proving to be anything but with shares falling in February on worries about US inflation, only to rebound and then fall again with markets back to or below their February low, notwithstanding a nice US bounce overnight. From their highs in January to their lows in the last few days, US and Eurozone shares have fallen 10%, Japanese shares are down 15% (not helped by a rise in the Yen), Chinese shares have fallen 12% and Australian shares have fallen 6%. So what’s driving the weakness and what should investors do?

What’s driving the weakness in shares?

The weakness in shares reflects ongoing worries about the Fed raising interest rates and higher bond yields, worries that President Trump’s tariff hikes will kick off a global trade war of retaliation and counter retaliation which will depress economic growth and profits, worries around President Trump’s team and the Mueller inquiry, rising short-term bank funding costs in the US and a hit to Facebook in relation to privacy issues weighing on tech stocks. The hit to Facebook is arguably stock specific so I will focus on the other bigger picture issues.

Should we be worried about the Fed?

Yes, but not yet. The risks to US inflation have moved to the upside as spare capacity continues to be used up and the lower $US adds to import prices. We continue to see the Fed raising rates four times this year and this will cause periodic scares in financial markets. However, the Fed looks to be tolerant of a small overshoot of the 2% inflation target on the upside and the process is likely to remain gradual and US monetary policy is a long way from being tight and posing a risk to US growth.

What’s the risk of a global trade war hitting growth?

In a nutshell, risk has gone up but is still low. This issue was kicked off by Trump’s tariffs on steel imports and aluminium and then went hyper when he proposed tariffs on imports from China and restrictions on Chinese investment into the US and China threatened to hit back. It looks scary and is generating a lot of noise, but an all-out trade war will likely be avoided.

First, the tariff hikes are small. The steel and aluminium tariffs relate to less than 1% of US imports once exemptions are allowed for and the tariffs on Chinese imports appear to relate to just 1.5% of total US imports. And a 25% tariff on $US50bn of imports from China implies an average tariff increase of 2.5% across all imports from China and just 0.375% across all US imports. This is nothing compared to the 20% Smoot Hawley tariff hike of 1930 and Nixon’s 10% tariff of 1971 that hit most imports. The US tariff hike on China would have a very minor economic impact – eg, maybe a 0.04% boost to US inflation and a less than 0.1% detraction from US and Chinese growth.

Second, President Trump is aiming for negotiation with China. So far the US tariffs on China are just a proposal. The goods affected are yet to be worked out and there will a period of public comment, so it could be 45 days before implementation. So, there is plenty of scope for US industry to challenge them and for a deal with China. Trump’s aim is negotiation with China and things are heading in this direction. Consistent with The Art of the Deal he is going hard up front with the aim of extracting something acceptable. Like we saw with his steel and aluminium tariffs, the initial announcement has since been softened to exempt numerous countries with the top four steel exporters to the US now excluded!

Third, just as the US tariffs on China are small so too is China’s retaliation of tariffs on just $US3bn of imports from the US, and it looks open to negotiation with Chinese Premier Li agreeing that China’s trade surplus is unsustainable, talking of tariff cuts and pledging to respect US intellectual property. While the Chinese Ambassador to the US has said “We are looking at all options”, raising fears China will reduce its purchases of US bonds, Premier Li actually played this down and doing so would only push the $US down/Renminbi up. It’s in China’s interest to do little on the retaliation front and to play the good guy.

Finally, a full-blown trade war is not in Trump’s interest as it will mean higher prices in Walmart and hits to US goods like Harleys, cotton, pork and fruit that will not go down well with his base and he likes to see a higher, not lower, share market.

As a result, a negotiated solution with China looks is the more likely outcome. That said, trade is likely to be an ongoing issue causing share market volatility in the run up to the US mid-term elections with Trump again referring to more tariffs and markets at times fearing the worst. So, while a growth threatening trade war is unlikely, we won’t see trade peace either.

Australia is vulnerable to a trade war between the US & China because 33% of our exports go to China with some turned into goods that go to US. The proposed US tariffs are unlikely to cause much impact on Australia as they only cover 2% of total Chinese exports. The impact would only be significant if there was an escalation into a trade war.

Should we worry about Trump generally?

Three things are worrying here. First, it’s a US election year and Trump is back in campaign mode and so back to populism. Second, Gary Cohn, Rex Tillerson and HR McMaster leaving his team and being replaced by Larry Kudlow, Mike Pompeo and John Bolton risk resulting in less market friendly economic and foreign policies (eg the resumption of Iran sanctions). Finally, the Mueller inquiry is closing in and the departure of John Dowd as Trump’s lead lawyer in relation to it suggests increasing tension. The flipside of course is that Trump won’t want to do anything that sees the economy weakening at the time of the mid-term elections. But it’s worth watching.

What about rising US short term money market rates?

During the global financial crisis, stress in money and credit markets showed up in a blowout in the spread between interbank lending rates (as measured by 3-month Libor rates) and the expected Fed Funds rate (as measured by the Overnight Indexed Swap) as banks grew reluctant to lend to each other with this ultimately driving a credit crunch. Since late last year the same spread has widened again from 10 basis points to around 58 points now. So far the rise in the US Libor/OIS spread is trivial compared to what happened in the GFC and it does not reflect credit stresses. Rather the drivers have been increased US Treasury borrowing following the lifting of the debt ceiling early this year, US companies repatriating funds to the US in response to tax reform and money market participants trying to protect against a faster Fed. So, it’s not a GFC re-run and funding costs should settle back down. 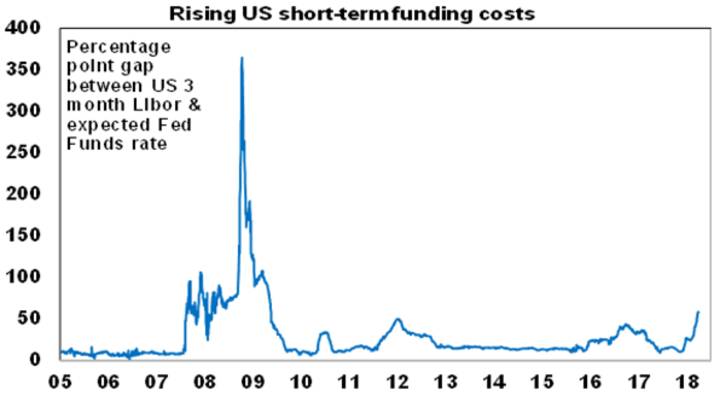 Is the US economy headed for recession?

Our assessment remains that a US recession is not imminent:

We have not seen the excesses – debt, overinvestment, capacity constraints or inflation – that precede recessions. 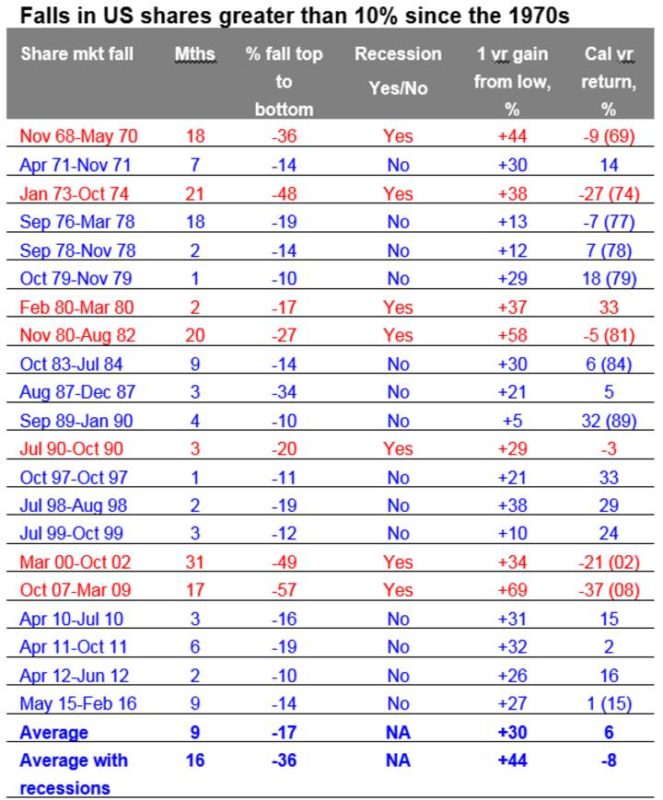 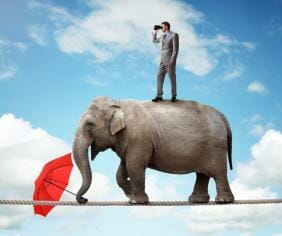 What should investors do?

Sharp market falls are stressful for investors as no one likes to see the value of their wealth decline. But I don’t have a perfect crystal ball so from the point of sensible long-term investing:

First, periodic sharp setbacks in share markets are healthy and normal. Shares literally climb a wall of worry over many years with numerous periodic setbacks, but with the long-term trend providing higher returns than other more stable assets.

Third, when shares and growth assets fall they are cheaper and offer higher long-term return prospects. So the key is to look for opportunities that pullbacks provide.

Fourth, while shares may have fallen in value the dividends from the market haven’t. So the income flow you are receiving from a well-diversified portfolio of shares remains attractive.

Fifth, shares often bottom at the point of maximum bearishness. And investor confidence does appear to be getting very negative which is a good sign from a contrarian perspective.