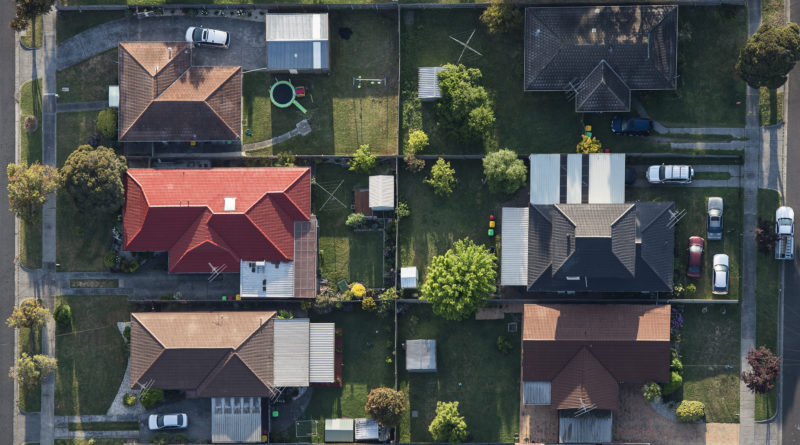 How are Australia’s states and territories tracking?

The various comparative advantages of Australian states and territories (e.g. tourism in Qld, manufacturing in Vic and SA, mining in WA, QLD and NT and agriculture in SA and TAS) means there are often periods of growth divergences across the country as industries are impacted by different trends at various points in the economic cycle.

A multi-speed economy has been a feature of Australia’s economic environment for numerous years. The mining investment boom over 2010-12 transferred labour and investment to Western Australia (WA), Queensland (Qld) and (to a lesser extent) the Northern Territory (NT) from the rest of the country and these regions outperformed the rest of the nation. This changed after the downturn started in mining investment (from 2013) when mining state growth slumped while growth in the large non-mining states of New South Wales (NSW) and Victoria (Vic) lifted as services demand rose and interest rate cuts spurred a housing boom. More recently, slowing home price growth in Sydney and Melbourne, a bottoming in WA growth and an upturn in Tasmania (Tas) is leading to a growth convergence across Australia (see chart below) and should result in more comparable outcomes across the states and territories. 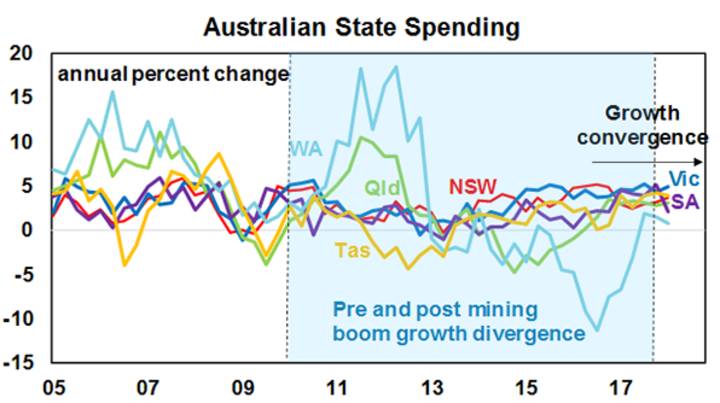 Our tracker of state and territory performance (see table below) based on the latest indicators reveals that Vic and ACT are ranked as the best performing state/territory across the various metrics, followed by NSW, with SA and Tas running around the middle of the pack. Qld, the NT and WA are still lagging behind because of the remnants of the mining investment decline. 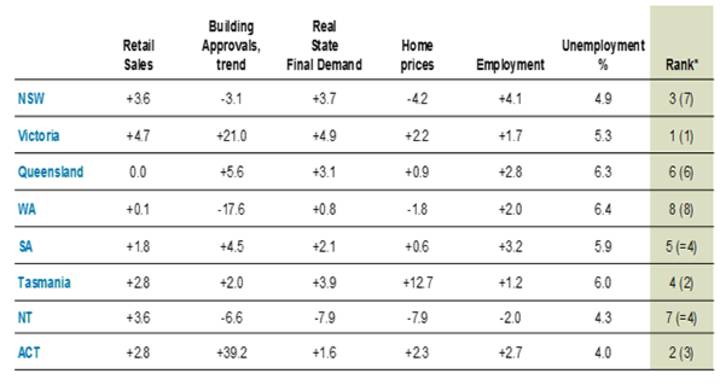 In this note, we look at key indicators of state and territory performance, as well as the outlook for the medium-term.

The state of the labour market 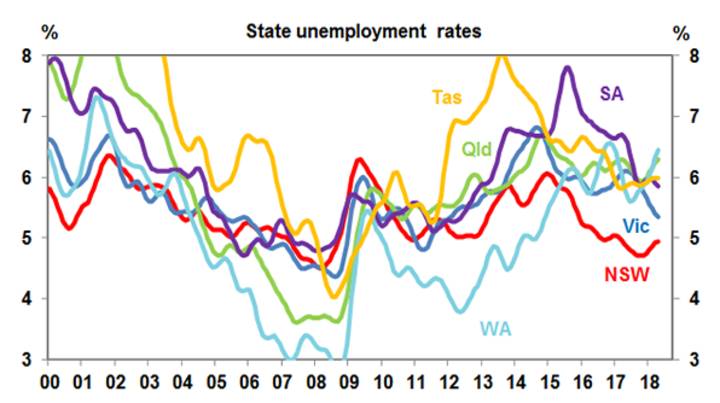 NSW employment growth has been strongest across Australia over the past year, with large gains in healthcare, retail and construction being partly offset by losses in public administration and professional service jobs. But the steadily increasing participation rate has been pressuring the unemployment rate a little higher (although the unemployment rate is still the lowest across all of the states). The labour market is expected to remain solid in NSW, especially in infrastructure-related construction jobs. Qld’s unemployment rate still remains elevated but jobs growth has been good and the state has absorbed the majority of mining-related job losses. Recent federal government funding towards infrastructure projects in Qld will be positive for employment. The SA and Vic labour markets have weathered the closure of car manufacturing and SA may benefit from higher spending on battery technology at the margin. Vic jobs growth has been modest, helped by gains in construction and transport (which are likely to continue) while public administration has also had job losses, along with healthcare. The WA labour market has probably gone through its worst, but strong employment growth is unlikely as mining investment still has further to fall. NT jobs growth remains slow. The ACT labour market is very reliant on government funding and the size of the public sector. 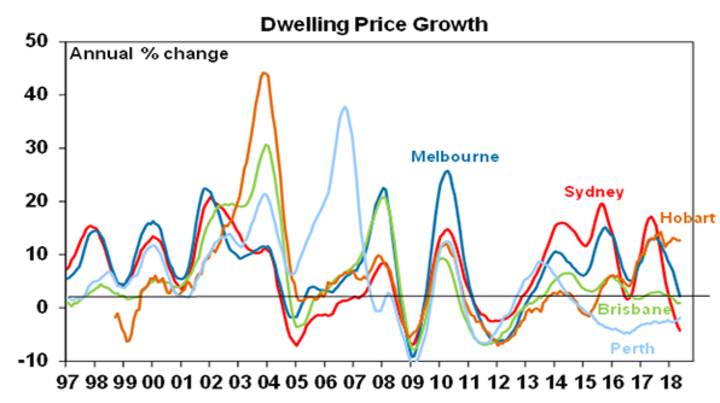 The big negative for NSW and Vic will be declining dwelling prices in Sydney and Melbourne and its impact on consumers. Very high new dwelling supply in the two cities (especially for apartments) over recent years, affordability pressures given the run-up in prices and a tightening in lending standards is putting downward pressure on prices. We expect prices in Sydney and Melbourne to fall another 4% this year (predominately focussed in apartment prices), another 5% next year and a modest fall in 2020. Prices in Perth and Darwin look to be bottoming, or close to it, price growth in Brisbane is likely to be modest while Hobart price increases are expected to continue to be solid due to investor (and potentially relocation) demand from the rest of Australia.

The employment and wages outlook are the major drivers for the consumer outlook. Wages growth in WA (+1.5%pa) and NT (+1.1%) are significantly below the rest of Australia (+2%) from the mining investment drag while wages growth across the rest of Australia is clustered around 2% or slightly higher. Better employment growth is needed to lift wages and household spending (the chart below shows that WA retail spending is clearly trailing behind) but it does look like the worst of the wages slump has passed. The next risk is the negative housing wealth effect which will impact NSW and Vic the most. 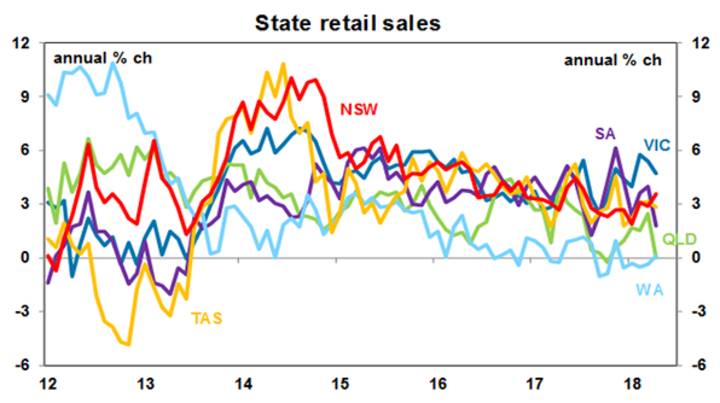 Population growth is often overlooked but needs to be considered, given population and productivity growth are the two fundamental drivers of potential economic growth. Australian GDP growth has been much higher compared to our global peers over recent years partly due to strong population growth.

Victorian population growth continues to outpace the rest of the states significantly (see chart below). Part of the flows are from overseas migration but Vic also enjoys strong interstate flows. 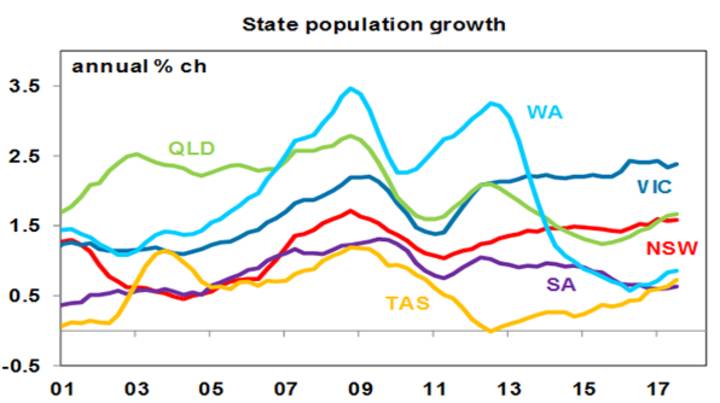 The strength in underlying population growth in Vic has been an important source of housing demand for the state and in keeping prices from declining too much, particularly over recent periods. In comparison, NSW home price has been declining faster than in Vic. While NSW population growth is also good overall, one negative offset has been interstate outflows (see chart below) which has been accelerating lately. These NSW “refugee” outflows appear to be going towards QLD lately and probably reflect housing affordability pressures in Sydney. 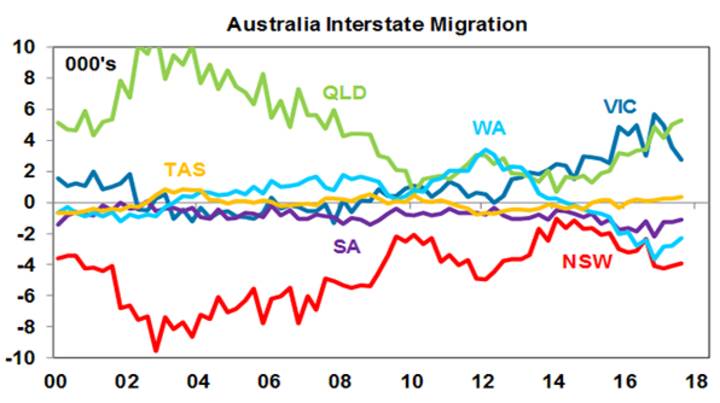 Housing affordability pressures do not look like they are easing for now, so NSW is likely to continue to see interstate outflows and Vic inflows may slow and the beneficiaries will be Qld, Tas and SA. Keep in mind that short-term visitors (e.g. those staying for education purposes) mainly reside in Sydney and Melbourne and would not be included in population flows but still add to demand for housing and provide a positive offset to lower prices.

Some convergence in growth outcomes across the states and territories over the near-term means that investors should anticipate more comparable outcomes across Australia. 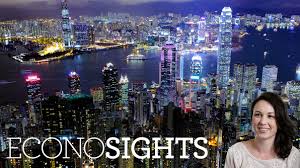 Don’t let lost super leave you out of pocket, wherever your super is, we’ll find it for you.

Now is the time to bring it all together 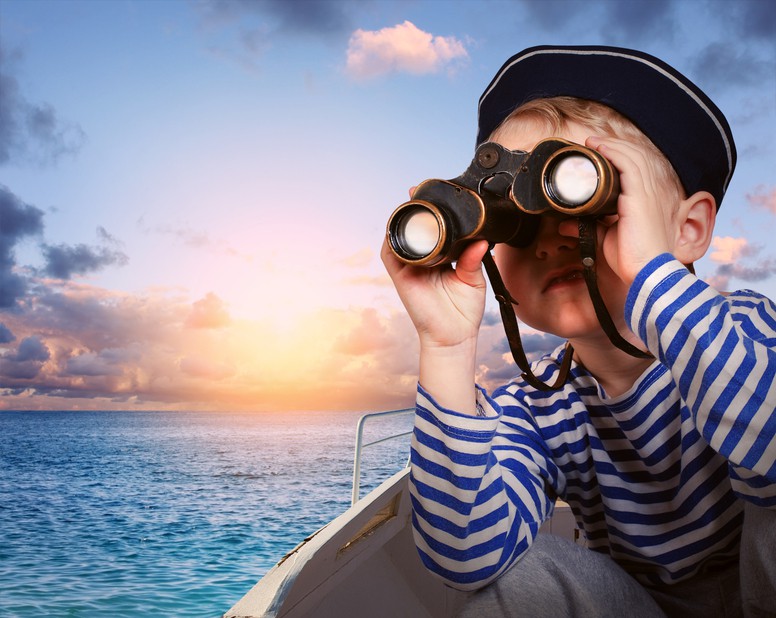