The past week saw share markets boosted by renewed hopes for US-China trade talks helped by a conciliatory approach from China. This saw US and Eurozone shares rise and Japanese and Chinese shares recover from earlier declines. Australian shares fell sharply early in the week but ended higher as renewed optimism on US-China trade talks boosted material and industrial stocks and good earnings news helped consumer staples with IT, financials and health stocks also seeing good gains. Bond yields fell further with a sharp fall in Italian bond yields after a new Government was formed. Oil and metal prices rose but the iron ore price fell further. The $A fell on the back of weak economic data and a rise in the $US.

China to play the adult in the room in the face of Trump’s trade war tantrums? Who knows but it does seem China may be changing its strategy to dealing with the trade war. Looking at President Trump’s tweet storm on China last weekend and subsequent comments at the G7 meeting and listening to Taylor Swift’s new album made me think that he needed to refocus from “Me” to “You Need to Calm Down”. Trump’s maximum pressure approach has been resulting in more escalation and his demeaning style and constant flip flops calling into question his credibility were looking like an impediment to a deal. However, comments by China’s Ministry of Commerce spokesperson Gao Feng that: China would not immediately retaliate to the latest US tariff increases; urging discussion of how to remove them; saying that a resumption of talks is vital; and noting that US-China interests were intertwined suggest that it may be changing its strategy (which has so far seen it retaliate to each round of US tariff hikes) in the interests of resolving the dispute. To get anywhere it probably requires President Trump to show some goodwill by delaying or cancelling some of the latest tariff increases and we need to see face to face meetings start up again. But China’s more mature stance does point to a possible off-ramp to the trade war. There is a long way to go though and re-establishing trust will be difficult after the experience since mid-last year.Share markets may still have to fall further to pressure Trump to resolve the issue. But at least there may be some light at the end of the tunnel.

Over in Europe Brexit has taken another twist with PM Johnson suspending Parliament from 10 September to 14 October adding to the uncertainty around what will happen when the latest Brexit deadline is reached on 31 October. On the one hand the suspension is designed to make it harder for Parliament to block a no deal Brexit. On the other hand, it could drive the divided opposition to a no deal Brexit in Parliament to quickly unite in the shortened time available posing a threat to Johnson’s plans and his government. The Brexit comedy continues!

Meanwhile, Italy has a new coalition Government between the left wing Five Star Movement (5SM) and the centre left establishment Democratic Party (PD). It should be a bit more stable than the previous far left/far right coalition that always seemed doomed to failure, but not much given that 5SM grew out of opposition to the establishment parties like the PD. At least it heads of another election for now.

In Australia, its pretty well known that we are likely to have seen our first current account surplus in the June quarter since 1975 but a speech by RBA Governor Guy Debelle highlights how significant this is. Yes the surge in iron ore and coal prices played a role in that and since they have now reversed the surplus will likely dip back into deficit but, as Debelle points out, the reasons for the improvement are more than just commodity prices so the deficit is likely to be well below the norm of recent decades going forward. What’s more there has been a significant improvement in our foreign liabilities with a shift away from short term debt to long term debt and a growing net equity position (ie Australia having more foreign equity than foreigners having Australian equity). What’s more our liabilities tend to be in Australian dollars and our foreign assets are in foreign currency so when the $A falls our net foreign liabilities go down! This all means that our reliance on foreign capital inflow has declined and the $A can happily play its role as a shock absorber and decline when things go wrong with the global economy without causing debt servicing problems. So much for all the talk in the 1980s about Australia being like a boiling frog! 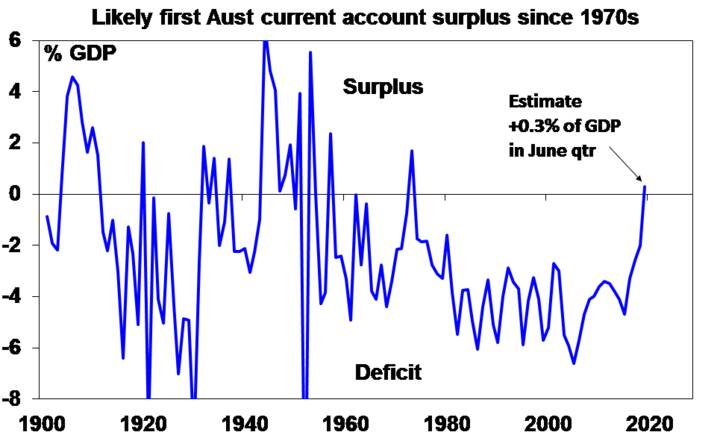 The German IFO business survey slid again in August but the French INSEE business survey is holding up much better highlighting that its primarily a German problem. Meanwhile Eurozone bank lending picked up in July, but is still soft.

Japan’s labour market remained tight in July (although its being helped by a falling population) and industrial production bounced more than expected but retail sales were very weak.

Australian data releases were a mixed bag. A broad-based plunge in construction activity and a fall in business investment will act as another drag on June quarter GDP growth. Against this business investment plans point to modest growth in business investment over the year ahead led by mining investment. Meanwhile new home sales were soft in July according to the HIA, credit growth remains soft (with owner occupier credit up but investor credit still falling) and building approvals continue to plunge with another sharp fall in July.

The Australian June half reporting season is now complete. The overall picture is soft with earnings growth barely positive in 2018-19, but there are some positive signs. The weakness was pretty broad based:

As a result, 2018-19 earnings growth has come in around 1.5% from around a 2% consensus expectations at the start of August. Resources stocks are seeing earnings growth around 13% compared to a 2% decline for the rest of the market, but with healthcare stocks also seeing double digit earnings growth. Downgrades have been greatest amongst energy stocks, financials, telcos and industrials. The good news though is that some retailers were upbeat about rate cuts and tax cuts boosting spending and property related companies pointed to signs of increasing housing demand. While Australian shares fell around 3.2% in August this was due global trade war concerns with investors reasonably forgiving of the soft profit reporting season overall on the back of low interest rates and hopes for a stimulus boost to growth to come. While consensus earnings expectations are for a pick up in earnings growth to 7.5% this financial year, the slowdown in economic growth, cautious outlook statements and falling commodity prices suggest some downside risk to this. 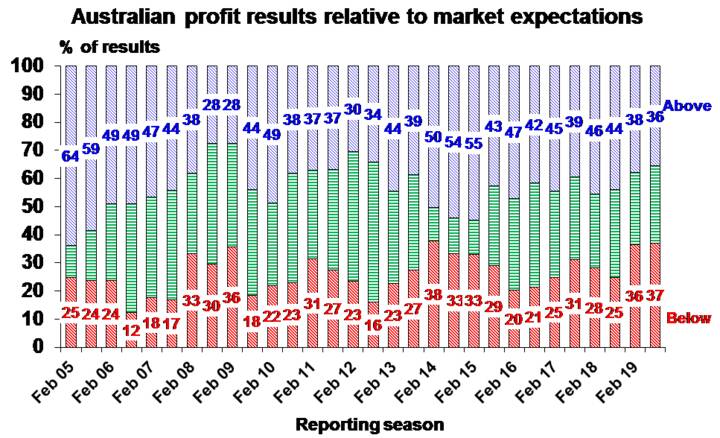 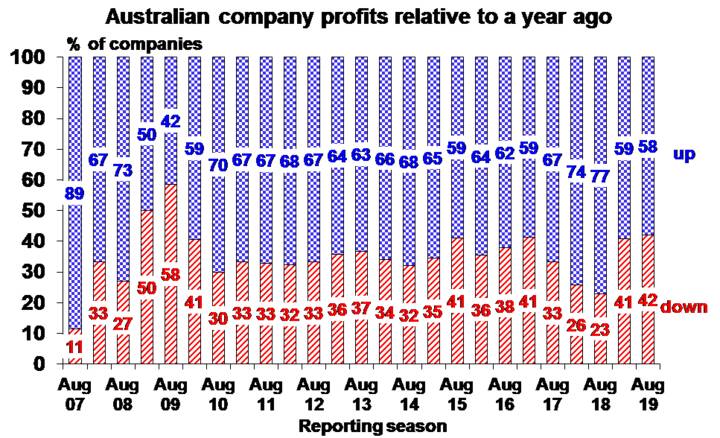 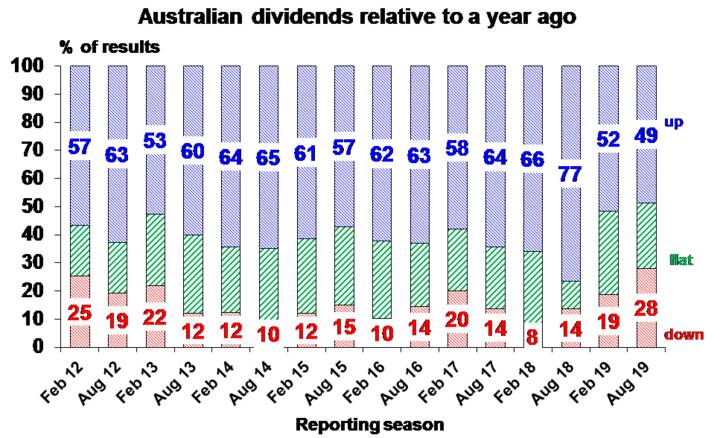 
In the US, expect the August manufacturing conditions ISM (Monday) to fall further to 50.5 on the back of trade fears and jobs data (Friday) to show a 160,000 gain in payrolls which along with downward revisions to previous data will be consistent with slowing but still strong US jobs growth.

Unemployment is likely to be unchanged at 3.7% and wages growth is likely to be around 0.3% month on month or 3.3% year on year. In other data, expect to see a slight improvement in the trade balance (Wednesday) and a slight fall in the non-manufacturing conditions ISM (Thursday).

Chinese Caixin business conditions PMIs will be released Monday and Wednesdayand are likely to remain weak for manufacturers.

In Australia, the RBA should be cutting interest rates again on Tuesday but looks likely to leave them on hold. While house prices in Sydney and Melbourne may be bouncing higher, growth looks to have remained very soft in the June quarter, the growth outlook remains weak with the housing construction downturn gathering pace and threat from Trump’s trade war increasing and there is no sign of any pick up in wages growth and inflation with unemployment looking more likely to drift up than down. However, the RBA looks inclined to wait for an “accumulation of additional evidence” including seeing what sort of impact the recent rate cuts and tax cuts have provided to the economy. So, it’s likely to remain on hold in wait and see mode on Tuesday. That said it’s a close call – we wouldn’t be surprised if the RBA cuts and we continue to see two more rate cuts by year end taking the cash rate to 0.5%.

Australian June quarter GDP data (Wednesday) will likely show growth at its weakest in 19 years. We expect a 0.4% quarter on quarter rise in GDP but with annual growth slowing further to just 1.3% year on year from 1.8% in the March quarter. This would be slower than the GFC low of 1.5% year on year and the weakest annual gain seen since December quarter 2000 after the GST started up. Net exports are expected to provide a 0.2 percentage point contribution to growth as are inventories and public spending growth is likely to be positive, but this is expected be offset by continued softness in consumer spending and falling dwelling and business investment. In other data, the current account (Tuesday) is expected to show its first surplus since 1975, retail sales for July (Tuesday) are likely to show a 0.3% lift helped by tax cuts and the trade surplus for July (Thursday) is expected to have remained big, but expect a sharp fall for August as the recent slump in iron ore and coal prices impact.

Share markets remain at high risk of further weakness in the months ahead on the back of the ongoing US/China trade war, Middle East tensions and mixed economic data as we are in a seasonally weak part of the year for shares. But valuations are okay – particularly against low bond yields, global growth indicators are expected to improve by next year and monetary and fiscal policy are becoming more supportive all of which should support decent gains for share markets on a 6-12 month horizon.

The combination of the removal of uncertainty around negative gearing and the capital gains tax discount, rate cuts, tax cuts and the removal of the 7% mortgage rate test are leading to a rise in national average capital city home prices driven by Sydney and Melbourne. But beyond an initial bounce, home price gains are likely to be constrained through next year as lending standards remain tight, the supply of units continues to impact and rising unemployment acts as a constraint.

The $A is likely to fall further to around $US0.65 this year as the RBA cuts rates further. Excessive $A short positions, high iron ore prices and Fed easing will help provide some support though with occasional bounces and will likely prevent an $A crash.