Good news week! It certainly seemed that way for financial markets with a lot of relatively small positives – the US and China indicating that face to face trade war talks will start again next month, Hong Kong withdrawing the extradition bill, the UK parliament standing up to block a “no-deal Brexit” and confirmation that Italy has a new government without another election – all serving to drive “risk on”. This saw share markets rise, bond yields move up sharply, commodity prices rise with the exception of gold, commodity currencies like the $A rise and the $US fall. Australian shares followed the global lead higher led by IT, consumer stocks, the miners and financials but bond sensitive property, telco and utility stocks all fell in value as bond yields rose.

Good news on trade but just recall we have seen this movie several times before. The news of the resumption of the trade talks is good and likely follows China’s decision a week ago not to retaliate against the latest round of threatened tariffs from the US, which provides hope that with China playing the adult in the room maybe the situation can start to de-escalate. President Trump is likely also under a lot of pressure given the increasing recession talk in the US. He even noted for the first time that were it not for his trade war US shares would be a lot higher which by implication means that he must also acknowledge that the US economy would be a lot stronger. But while the resumption of talks (assuming it happens) is good this will be the fourth attempt with the previous three ending in a twitter tantrum and more tariffs and so it would be wrong to get too optimistic just yet. No doubt we will hear lots of “the talks are going well” and “they really want a deal” from President Trump again. But we need to see clear evidence that both sides are prepared to compromise. Share markets may still have to fall further to pressure Trump to resolve the issue.

It may be wrong to say that they are connected but China’s more conciliatory approach on trade a week ago and now a more conciliatory stance on Hong Kong with support for the withdrawal of the extradition bill are positive signs given that a week ago hardly anyone expected such a concession. On the one hand the protest leaders have said the move is not enough. On the other, HK leader Carrie Lam has said it’s only the “first step” to resolving the political, economic and social issues causing the deadlock so maybe the risk of military action to put down the protests is receding.

The Brexit debacle is getting up there with The Party for laughs. Looks like PM Johnson’s move to suspend Parliament has backfired with those opposed to a “no-deal” Brexit in Parliament (ie leave the EU without a free trade deal) moving to block such an exit on October 31 and to move to block the PM calling an early election. The strategy looks to be to only allow an early election if a no-deal Brexit is off the table. Financial markets like that because of the fear that a no-deal Brexit would reap havoc with the UK economy as 46% of its exports go to the EU. So, the British pound rose. The only thing is that the Brexit comedy has a long way to go yet so it’s too early to go long the pound. But it does seem that the risk of a no-deal Brexit has receded a bit and no Brexit at all remains possible.

Another word on Italy – Itexit remains as far off as ever! It’s questionable how durable the new Italian coalition government will be. However, recent events highlight several positives. First, the Northern League (NL)/Five Star Movement (5SM) government showed that Italy’s two main populist parties are pragmatic to the point of working with the European Commission to avoid a financial meltdown. Second, 5SM has shown the same again in being able to cooperate with the Democratic Party (PD) to form a new coalition. Third, the new 5SM/PD government will likely push for fiscal stimulus but this is coming at a time when the rest of Europe is likely to be a bit more flexible given the economic slowdown. Finally, polls show that 68% of Italians support the Euro which is why 5SM and NL had to drop their anti-Euro stance to get a decent share of the vote in the first place. Barring a big economic downturn in Italy and a big new surge in immigration, those waiting for an Itexit to pose a threat to the Eurozone will continue to be disappointed. 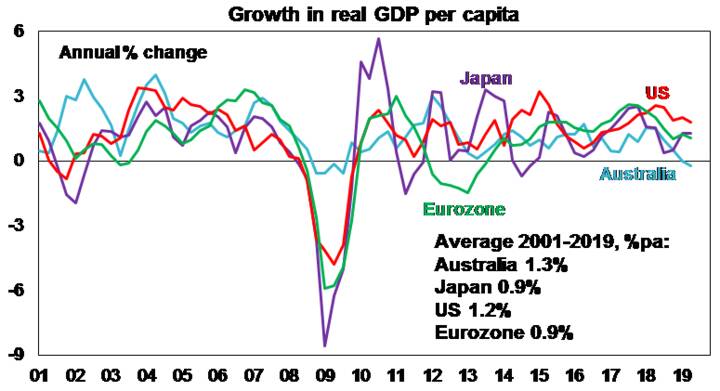 A “stronger” inflation target for Australia with talk from the Treasurer suggesting it will remain 2-3% (I would hope so -otherwise it will lose credibility) but that it may be strengthened by requiring an explanation when the target is missed. I am not sure that this would change things that much, but it could see the RBA getting more aggressive to bring inflation back to target whenever it is outside it (like now), which is contrary to the more flexible approach adopted just three years ago.

US economic data got off to a bad start with a sharp fall below the 50 level in the manufacturing conditions ISM and weak construction spending. Against this though the non-manufacturing ISM rose and is strong. The trade deficit also narrowed slightly, and jobs indicators remained solid.

Final composite business conditions PMIs in the Eurozone and Japan were confirmed to have risen in August with the services sector still doing better than manufacturers. China’s Caixin PMIs also rose in August. Consequently, despite a fall in the US, the global composite business conditions PMI fell only slightly in August and has been tracking sideways over the last few months holding out a bit of hope for the global economy despite all the talk of recession. It still looks like the slowdowns around 2012 and 2015-16 rather than the slide into what became the GFC recession. 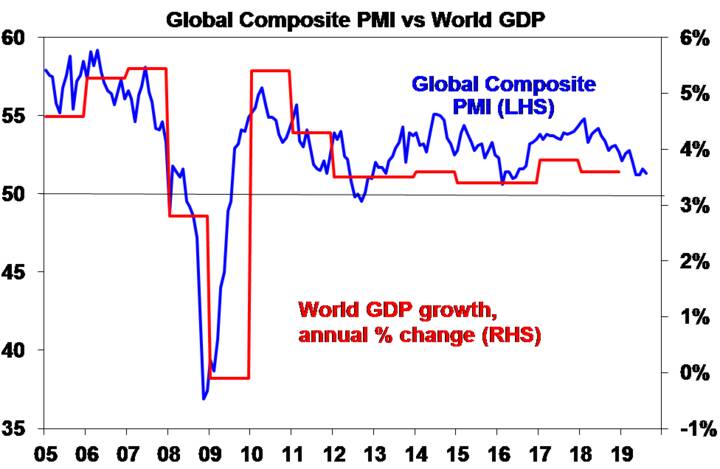 The key message out of Chinese policy makers over the last week is that more policy stimulus is on the way with the threat to growth clearly remaining a big concern.

The past week saw June quarter GDP data confirm the ongoing weakness in the Australian economy. June quarter growth wasn’t as bad as feared but it still showed that annual growth has slowed to just 1.4% year on year, its weakest since the GFC and were it not for strong growth in public demand and net exports the economy would have gone backwards. What’s more retail sales continued to fall in July and industry data showing softness in car sales into August raise questions about the impact of the tax and rate cuts – but maybe it’s a bit too early to tell yet. And ANZ job ads fell anew in August pointing to much slower jobs growth ahead as does the huge disconnect between GDP growth of just 1.6%yoy and employment growth running at 2.4%yoy.

But there was also some good news. First, the current account returned to surplus for the first time since 1975. While the trade surplus remained strong in July its likely to decline given the recent plunge in iron ore and coal prices suggesting a return to a current account deficit. However, its likely to remain a lot smaller than seen in recent decades and means that Australia’s dependence of foreign capital is much reduced. Second national average house prices have started to rise again and while its hard to see a return to boom time conditions the threat of a debilitating negative wealth effect on consumer spending looks to be receding. Finally, the AIG’s manufacturing and services conditions PMIs rose in August, but this needs to be taken against the CBA’s versions that fell and on average they are pretty soft.

The bottom line is that while recession remains unlikely, growth and activity is well below where it should be and this means ongoing upwards pressure on unemployment and subdued wages growth and inflation. This is consistent with the Melbourne Institute’s Inflation Gauge running at just 1.7% year on year in August. So while the RBA left rates on hold in September and seemed a bit oblivious to the run of negative domestic and trade war news over the last month we remain of the view that it will need to ease further and still see the cash rate falling to 0.5% by year end.

The key focus of investors over the week ahead will be the European Central Bank on Thursday which is expected to deliver a much-anticipated easing of monetary policy designed to deal with weak growth and inflation chronically below target. We expect the ECB to announce a package of rate cuts, tiering of negative rates on bank reserves and renewed quantitative easing which will result in asset purchase of around €30bn a month.

In the US, core CPI inflation for August (Thursday) is expected to show a small rise to 2.3% year on year and retail sales (Friday) are expected to show reasonable growth. Small business confidence and labour market indicators will also be released on Tuesday.

Chinese data is expected to show a slight dip in CPI inflation (Monday) for August to 2.6% year on year, continuing low underlying inflation, some slowing in exports and imports (Tuesday) and a rebound in credit growth.

Share markets are still at high risk of further weakness/volatility in the months ahead on the back of the ongoing US/China trade war, Middle East tensions and mixed economic data as we are in a seasonally weak part of the year for shares. But valuations are okay – particularly against low bond yields, global growth indicators are expected to improve by next year and monetary and fiscal policy are becoming more supportive all of which should support decent gains for share markets on a 6-12 month horizon.

The combination of the removal of uncertainty around negative gearing and the capital gains tax discount, rate cuts, tax cuts and the removal of the 7% mortgage rate test are leading to a rise in national average capital city home prices driven by Sydney and Melbourne. But beyond an initial bounce, home price gains are likely to be constrained through next year as lending standards remain tight, the record supply of units continues to impact and rising unemployment acts as a constraint.

The $A is likely to fall further to around $US0.65 this year as the RBA cuts rates further. Excessive $A short positions, high iron ore prices and Fed easing will help provide some support though with occasional bounces and will likely prevent an $A crash.