The past week saw major share markets continue to push higher helped by the lessening in geopolitical risks around trade and Brexit and a solid start to US September quarter earnings reports. Australian shares also rose with solid gains in energy, health, consumer discretionary, industrial and financial shares but a sharp fall in material stocks and reduced expectations for rate cuts held the market back. Bond yields generally rose as growth fears continued to recede a bit, but commodity prices were soft with a sharp fall in iron ore prices. The Australian dollar rose on reduced expectations for near term rate cuts and as the $US fell.

US/China tensions continued to fester over the last week, with the details of the Phase One mini trade deal yet to be finalised and issues around Hong Kong not helping. But it looks like HK is being treated separately to the trade issue and Chinese officials have confirmed that they are still working on the text of the trade deal with US negotiators. The trade issue could still have flare ups, but the intense economic pressure on both sides to de-escalate means that we have probably seen the worst in terms of trade war angst, at least until after the US election next year.

The UK and EU agree a Brexit deal – whether it will pass the UK parliament remains a big uncertainty, but the risk of a no-deal Brexit has now fallen sharply given that Johnson is now supporting a deal. The new deal gets around some of the issues associated with the Irish backstop but its far from certain that PM Johnson has the numbers to get it through parliament but because he has agreed a deal it substantially reduces the risk of a no deal Brexit. Going forward there look to be three possible scenarios.

The second and third scenarios involve a lot more uncertainty, but the point is that with Johnson swinging behind a Brexit deal the risk of a no deal Brexit has fallen sharply. Its still a comedy for those outside the UK and just remember that this a much bigger issue for the UK (as 46% of its exports go to the EU) than it is for the EU (which has 6% of its exports going to the UK) now that the risk of Brexit contributing to a contagion of countries exiting the Eurozone has collapsed.

The IMF revised down its global growth forecasts yet again to 3% for this year and 3.4% for next – this is just catching up to the reality as already reflected in share market volatility, lower bond yields and central bank easing. After a brief interruption through 2017 we are back to the pattern seen through much of this decade which has seen initial optimism for growth of around 4% for the year ahead give way to downwards revisions to around 3%. The downside is that stronger growth remains elusive, but the upside is that it prevents the build up of excess in areas like inflation and so keeps the investment cycle going. 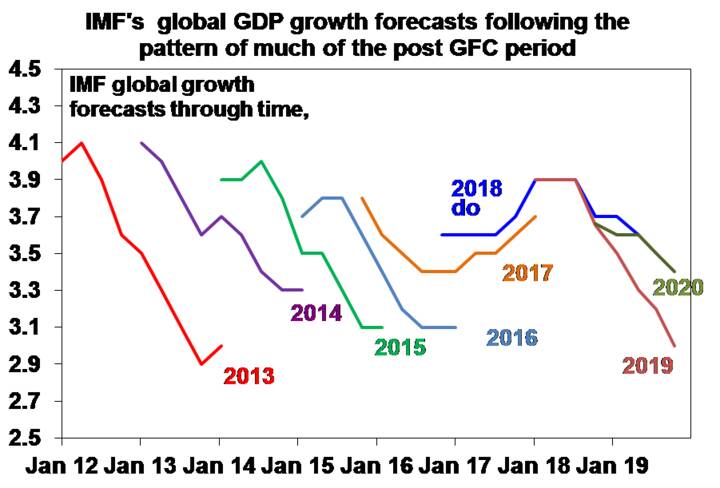 Mixed messages from the RBA including upbeat comments from Governor Lowe and better jobs data has seen market expectations for further RBA rate cuts fall sharply for this year, but it looks like an over reaction to us. The hawkish turn in rate cut expectations reflects a combination of the RBA minutes running through the arguments against further rate cuts, a slightly better than expected jobs report for September, RBA Governor Lowe emphasising the RBA’s upbeat view on the economy in Washington and noting that while more rate cuts are possibly needed “I wouldn’t assume it” and a return to optimism in global financial markets generally after the recent lessening in geopolitical risks. Our view is that while September’s slight fall in unemployment may have bought the RBA a bit of breathing space and that the list of positives Governor Lowe refers to will help avoid a recession, we doubt growth will be strong enough to achieve full employment and get inflation back to target anytime soon. The following points are worth noting: 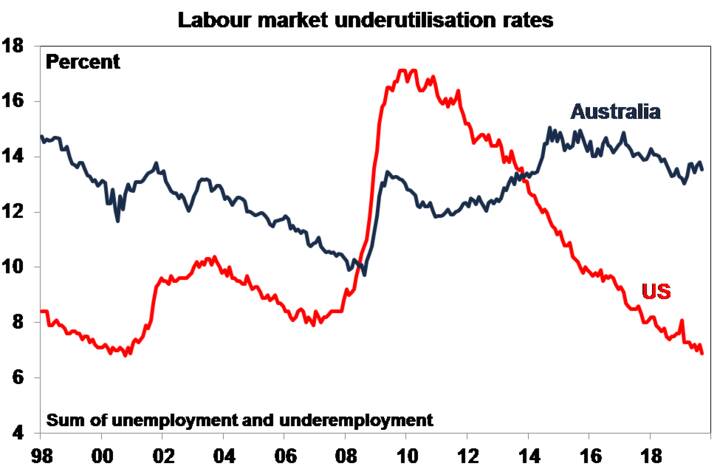 It’s understandable that the Governor wants to talk the economy up with a “glass half full assessment” to prevent sentiment becoming too negative and self-fulfilling. But as we have seen this year it will have to continue to act if its not achieving its mandate. Ideally, fiscal stimulus should be stepping in but it still looks a way off in Australia with the Government still focussing on the budget surplus and “keeping our powder dry”, so pressure will continue to fall on the RBA. The September jobs report and Governor Lowe’s comments have reduced prospects for a November rate cut but we remain of the view that the cash rate will fall to 0.25% by early next year. A risk in the Governor downplaying the prospect of further rate cuts is that it pushes the $A up, which is a defacto monetary tightening and will only increase pressure for more monetary easing.

US data was a mixed bag. Retail sales were soft in September although the previous month was revised up and real consumer spending growth looks to have been solid in the September quarter. Industrial production fell in September, albeit after a solid rise in August but the mixed readings for manufacturing conditions in October in the New York and Philadelphia regions suggest on balance that manufacturing conditions continue to remain soft. Housing starts fell back in September, but this was after a huge rise in August, the trend is rising and permits and home builder conditions point to more upside ahead. Lower bond yields have clearly boosted the US housing sector. Finally, jobless claims continue to remain ultra-low.

US September quarter earnings off to a solid start. While only 13% of S&P500 companies have reported to date, so far so good with 83% beating earnings expectations by an average of 4% and 52% beating on sales, suggesting that earnings growth for the last year will end up slightly positive.

Chinese growth slowed further in the September quarter to 6% year on year, but there are some positive signs suggesting the slowdown will be constrained. The trade war is clearly impacting, and this was evident in further falls in exports and imports with exports to the US and imports from the US down 22%yoy and 16%yoy respectively. Against this though annual growth momentum in September picked up slightly in retail sales and industrial production and credit and money supply growth were stronger than expected suggesting that monetary easing may be flowing through.

Japanese core inflation actually slipped to just 0.5%yoy in September, which is well below the 2% inflation target.

Australian jobs data for September was a bit better than expected, but not enough to change the outlook. Employment rose by 15,000 with a rebound in full time jobs and both unemployment and underemployment fell slightly. This may give the RBA a bit of breathing space. But unemployment only fell because of a small fall in participation, the combination of unemployment and underemployment remains very high at 13.5% compared to just 6.9% in the US and leading jobs indicators point to a slowing in employment growth ahead. Our view remains that growth is unlikely to be strong enough going forward to achieve full employment and the inflation target and so the pressure remains for further policy stimulus. 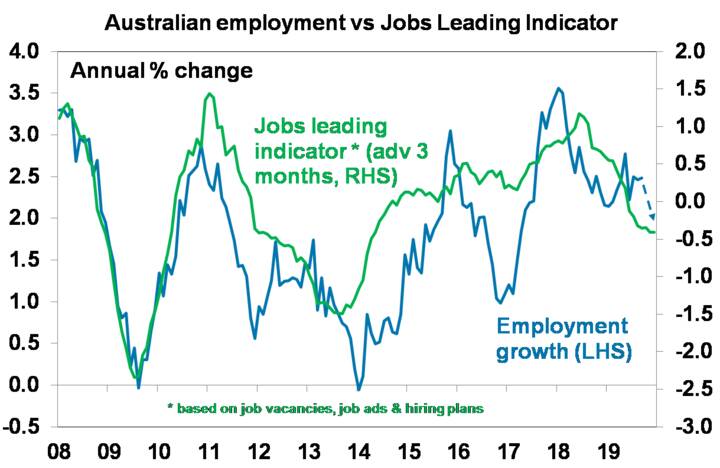 In the US, the main focus will be on October business conditions PMIs to be released Thursday and which are expected to show further signs of stabilisation. In other data expected to see a slight pull back in a rising trend for existing home sales (Tuesday) and new home sales (Thursday) and a fall in durable goods orders (also Thursday). The September quarter earnings reporting season will start to ramp up in the week ahead with consensus expectations for a roughly -2.4% year on year decline in earnings per share led by energy, materials and tech stocks with revenue growth of roughly 1.6%yoy. Assuming normal beats this suggests earnings growth will come in around +1%yoy.

The ECB meeting on Thursday is unlikely to provide any new insight on the significant easing package announced at the ECB’s September meeting. However, it will be Mario Draghi’s last as President before Christine Lagarde takes over and may see Draghi reflect on the experiences of his eight-year term. His key legacy has been the preservation of the Euro through his 2012 commitment to do “whatever it takes” which he vigorously backed up by the deployment of a range of new monetary policy tools and constantly berating politicians to do more. All of which enabled the Eurozone to stay together and emerge from the Eurozone debt crisis strengthened and more integrated. Under Draghi’s watch Eurozone unemployment has fallen from a high of 12.1% to 7.4% now, despite a long period of fiscal austerity. Eurozone business conditions PMIs to be released Thursday for October will be watched for signs of improvement after their sharp leg down in September.

In Australia data for skilled vacancies (Wednesday) and the CBA’s business conditions PMIs for October (Thursday) will be released.

Share markets remain at risk of further volatility in the months ahead given issues around trade, Iran & the Middle East, impeachment noise and weak global economic data. But valuations are okay – particularly against low bond yields, global growth indicators are expected to improve by next year and monetary and fiscal policy are becoming more supportive all of which should support decent gains for share markets on a 6-12 month horizon.

The election outcome, rate cuts, tax cuts and the removal of the 7% mortgage rate test are driving a rise in national average capital city home prices led by Sydney and Melbourne. But beyond an initial bounce, home price gains are likely to be constrained through next year as lending standards remain tight, the record supply of units continues to impact and rising unemployment acts as a constraint.