The good news continued over the last week with the US and China trading goodwill gestures on the trade war front, signs of a de-escalation of tensions with Iran and the ECB announcing a broad-based monetary easing. This saw share markets have another week of solid gains – with US and global shares coming close to the record highs seen in July. The Australian share market benefitted from the positive global lead and so continued to grind back to the new record highs seen in July, led over the last week by financials as banks benefit from rising housing finance, utilities and resources stocks but with gains being constrained by a rotation out of IT and defensive health, consumer staple and real estate stocks. Reflecting the risk on tone bond yields continued to back up as did the Australian dollar. Metal and iron ore prices also rose but oil fell on talk of easing Iran tensions.

The ECB has delivered a broad-based stimulus that exceeded market expectations. It’s basically ticked off everything on the unconventional monetary policy list that it feasibly can, with: a cut in the rate of interest it pays on bank reserves by 0.1% to a new low of -0.5%; a shift to tiering the negative deposit rate so that it only applies beyond a ratio of required reserves so banks are not penalised for keeping required reserves; a new open ended €20bn a month quantitative easing program from November; stronger forward guidance that commits to keep interest rates at present or lower levels until the inflation outlook “robustly converges” close to 2%; and sweeter long term funding arrangements (TLRTO) for banks. With the ECB saying that QE will end shortly before any rate hikes, the implication is that QE won’t end until the 2% inflation target is close to being met too.

While there was some opposition to parts of the package on the ECB Governing Council, it got majority support and Christine Lagarde is likely to stick to it when she takes over maintaining Draghi’s strong track record of doing “whatever it takes” to preserve the Euro and achieve the ECB’s mandate. But will it work? As always there is lots of debate about this, but several things are worth noting. First, the forward guidance and open-ended QE imply a much stronger commitment to getting inflation back up than the time dependent guidance of the past (RBA take note!). Second, tiering the negative deposit rate should take some of the margin pressure off banks. Third, the last big central bank to do “QE to infinity” was the Fed and it worked and was able to be ended. Finally, the ECB has indicated that its policies will work best if there were fiscal help and Europe seems to be moving in this direction – albeit gradually. Overall the ECB has now clearly joined other central banks in re-embracing monetary easing after the global economic upswing was derailed over the last year by a bunch of geopolitical risks led by the trade war. As such its positive for Eurozone shares and global risk assets, including the Australian share market. While the direct impact of more ECB bond buying is to push bond yields down this should already be reflected in yields and so to the extend that it boosts confidence and growth it may be more likely to be associated with rising bond yields. The same would apply in relation to the Euro.

News that China is exempting certain US products from last year’s tariffs, that the US will delay the extra 5% tariff on $250bn of imports by two weeks from October 1 and talk of an interim (or mini) trade deal where China buys some US agricultural products and undertakes some commitments protecting intellectual property in return for the US delaying or winding back some tariffs is very positive. Coming on the back on the back of China’s decision not to retaliate against the most recent US tariff hikes it indicates that there is some chance that next months trade talks will at least result in a de-escalation of the trade war. The goodwill moves also highlight the political pressure that both sides are under in response to the economic damage the trade war is causing. President Trump in particular looks to be getting nervous at increasing signs that the trade war is impacting the US growth outlook and the risk this poses to his re-election next year. While a comprehensive deal may not be forthcoming from the October talks, a mini deal stopping further escalation would be good news for the global economy and investment markets.

Similarly reports that Trump is considering easing sanctions on Iran and meeting with Iranian President Rouhani, which prompted the removal of foreign policy hawk John Bolton from Trump’s administration, is good news. It confirms that Trump does not want the US to embark another war in the Middle East and lowers the risk of a surge in oil prices on Iran tensions adversely affecting global growth.

Have bond yields bottomed? From their lows a few weeks ago 10-year bond yields in the US, Germany, Japan & Australia have risen by 20 to 30 basis points. Increasing global policy stimulus led by the ECB in the past week and the Fed in the week ahead along with reduced risks around trade & Iran add to confidence we may have seen the low point. Don’t expect a rapid rise though as we still need to see growth pick up.

US small business optimism dipped in August but remains strong and July labour market indicators were mixed with a dip in openings but still strong hiring and quits. Core CPI inflation rose more than expected in August and implies some uplift in core PCE deflator inflation to around 1.8%. This is another reason to expect the Fed to limit another insurance rate cut in the week ahead to 0.25% as opposed to 0.5%. There is zero chance of Trump’s call for a cut to zero and below at this point.

Chinese trade data for August highlighted the threats to the Chinese economy with exports falling as the trade war hits and imports continuing to fall on the back of weak domestic demand. Against this though bank lending and credit picked up in August and a further rise is likely in September on the back of this month’s reduction in banks’ required reserve ratios. Headline inflation is being boosted by higher pig prices, but underlying inflation is weak with producer prices falling indicating that inflation is no constraint to monetary easing.

The past week saw mixed data in Australia. Housing finance commitments for July showed a rise for the second month in a row which is consistent with auction data in showing an upturn in the property market (albeit mainly in Sydney and Melbourne). Against this though, business conditions weakened in August and consumer confidence fell, neither of which are positive signs for the hoped for pick up in spending in the economy on the back of the tax cuts. Interestingly though responses to a special question in the Westpac/MI consumer survey are consistent with about half of the tax cut being spent which is similar to what occurred with the Rudd stimulus payments.

Meanwhile, despite the surge in housing construction over the last few years the capital city average vacancy rate is around its long-term average. Sydney is a bit above average though and this should act to constrain Sydney home prices. 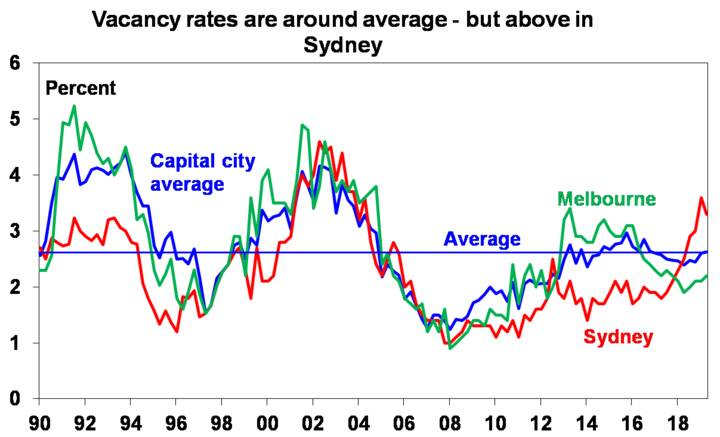 The Fed will be the key focus in the week ahead with another 0.25% rate cut expected to be announced on Wednesday which will take the Fed Funds rate down to a range of 1.75% to 2%. US growth is solid and the labour market remains tight but the threat to US growth from the trade war and slower global growth is significant, business indicators have softened, the inversion in parts of the yield curve is warning of increased risk of recession and inflation remains below target so it makes sense for the Fed to undertake another insurance cut. The Fed’s commentary is likely to remain dovish and we see another 0.25% coming in October.

On the data front in the US expect to see a modest rise in industrial production and reasonably solid home builder conditions (both Tuesday), a rise in housing starts (Wednesday) and a slight fall in existing homes sales (Thursday).

The Bank of England (Thursday) is not expected to change monetary policy but is likely to be dovish.

The Bank of Japan (Thursday) is not expected to change monetary policy either but is also likely to remain dovish. Core inflation (Friday) is expected to remain weak at 0.5%yoy.

Chinese activity data (Monday) for August is expected to show slightly stronger growth in industrial production of 5.2% year on year and retail sales of 8%yoy but investment growth remaining unchanged at around 5.7%.

In Australia, expect the minutes from the RBA’s last board meeting (Tuesday) to affirm that it retains a bias to cut interest rates again and August jobs data to be released Thursday will be watched for guidance as to if and when this will occur. Leading jobs indicators have been slowing and we expect employment to have risen by just 10,000 in August and unemployment to have edged up to 5.3%, keeping alive our expectation for another 0.25% rate cut next month. Meanwhile, ABS house price data for the June quarter (Tuesday) is expected show a 1.6% fall but is very dated given private sector surveys showing a rise since then. March quarter population data (Thursday) is expected to show population growth remaining around 1.6% year on year.

Share markets remain at risk of volatility in the months ahead given unresolved issues around trade and Iran and mixed economic data as we are still in a seasonally weak part of the year for shares. But valuations are okay – particularly against still low bond yields, global growth indicators are expected to improve by next year and monetary and fiscal policy are becoming more supportive all of which should support decent gains for share markets on a 6-12 month horizon.

The election outcome, rate cuts, tax cuts and the removal of the 7% mortgage rate test are leading to a rise in national average capital city home prices driven by Sydney and Melbourne. But beyond an initial bounce, home price gains are likely to be constrained through next year as lending standards remain tight, the record supply of units continues to impact and rising unemployment acts as a constraint.

The $A is likely to fall further to around $US0.65 this year as the RBA cuts rates further. Excessive $A short positions, still high iron ore prices and Fed easing will help provide some support though with occasional bounces and will likely prevent an $A crash.