Share markets fell over the last week, largely in response to a renewed rise in bond yields. Commodity prices rose, although this was mainly due to higher oil prices. Strong US economic data and some rise in expectations for Fed tightening saw the $US rise and this saw the $A fall below $US0.71.

Bond yields have resumed their rising trend, with more upside ahead. The break higher was led by the US with the US 10 year bond yield rising to a seven year high on the back of a combination of strong US economic data, rising oil prices and, most importantly, investors finally coming round to the view that the Fed Funds rate has a lot more upside and will likely rise above the Fed’s guesstimate of the “neutral” Fed Funds rate, which is around 3%. Of course, the Fed has been telling us this for a long time but the market didn’t really believe it. However, the past week saw several Fed speakers, including Fed Chair Powell and normally dovish Chicago Fed President Evans reinforce that the Fed Funds rate is at least going to neutral and probably beyond. On this front there is a long way for the market to adjust given the gap between the Fed’s dot plot which shows Fed Funds rate going up to nearly 3.4% and market expectations which remain way below that. This adjustment along with investors factoring in more normal inflation and growth expectations, rather than the subdued expectations for both of recent years, suggests US and global bond yields still have more upside. At some point this will seriously threaten shares, but that point is likely a fair way off given that US monetary policy is still far from tight, central banks in Europe and Japan are way behind the US in tightening, bond yields are still relatively low, US and global growth is still strong and this is supporting earnings. And as we have seen since 2016 low in bond yields the rise in yields won’t go in a straight line.

Australian bond yields may go up a bit as US yields rise but they are likely to continue to lag given that the lagging Australian economy means that the RBA will remain on hold with some chance of a rate cut. However, the rise in US and global bond yields adds to the risk of more out of cycle bank mortgage rate increases as global funding costs rise (with banks getting around 35% of their funding from sources other than deposits). Of course, if this becomes a problem for the Australian economy, it will provide a reason for the RBA to cut the cash rate to pull mortgage rates back down.

The new north American trade deal to be called USMCA (or US Mexico Canada Agreement) is good news but does not mean the US/China dispute will soon be resolved. The USMCA deal coming on the back of the revamped US/South Korea trade deal and trade talks with the EU and now Japan confirms that Trump is not anti-trade per se, but just wants what he thinks is fairer trade for the US. But its also consistent with him wanting to make trade peace with his allies and focus more on China. And on the US/China trade front the differences remain significant and both sides are likely to remain dug in until after the mid-term elections at least. Which means that the tariff rate on the latest $US200bn tranche of imports will likely rise to 25% next year and another tranche of tariffs remains possible. The near collision between Chinese and US naval ships in the South China Sea and a speech by US VP Pence highlights that trade tension is spilling into other areas.

Fears that the Italian budget issue is the start of a slide towards an Itexit are way overblown. If the populist coalition was focussed on Italy exiting the Euro it would have come up with a much bigger budget deficit target than 2.4% of GDP. Tension between the European Commission and Italy regarding the budget will likely be high causing occasional market volatility, but we remain of the view that the deficit target is not high enough to cause a major problem, France and Germany will not want to embolden Italian Eurosceptics and the rest of Europe will likely leave market forces (via higher Italian bond yields) to discipline Italy. And it appears that the Italian Government is aware of the risks with reports that its targeting a reduction in its budget deficit to below 2% of GDP by 2021.

The Financy Women’s Index does a great job of tracking women’s economic progress and the latest issue has just been released and is worth checking out. It can be found here.

Australian economic data was mixed. While retail sales improved in August, business conditions PMIs remain good and the trade surplus improved slightly, home prices are continuing to fall, new home sales are falling and building approvals are trending down pointing to slowing dwelling investment. It should also be noted that the improvement in retail sales was after a flat July so growth in the September quarter is on track to slow from the June quarter. And trade is also on track to make no contribution to September quarter GDP growth.

Australian dwelling prices have now fallen for 12 months in a row and more downside is likely in Sydney & Melbourne as a result of the combination of tighter bank lending standards, rising supply, falling price growth expectations feeding back to weaker home buyer demand and the possibility of changes to negative gearing and the capital gains tax discount if there is a change of government impacting investor demand. We continue to expect these cities to see a top to bottom fall in prices of around 15% spread out to 2020 which given falls already recorded since last year implies another 10% or so downside. And if anything, the risks are on the downside. Falling home prices will drive a weakening wealth effect which along with still low wages growth and an 11 year low in the household saving rate suggests that retail sales growth will slow over the year ahead. 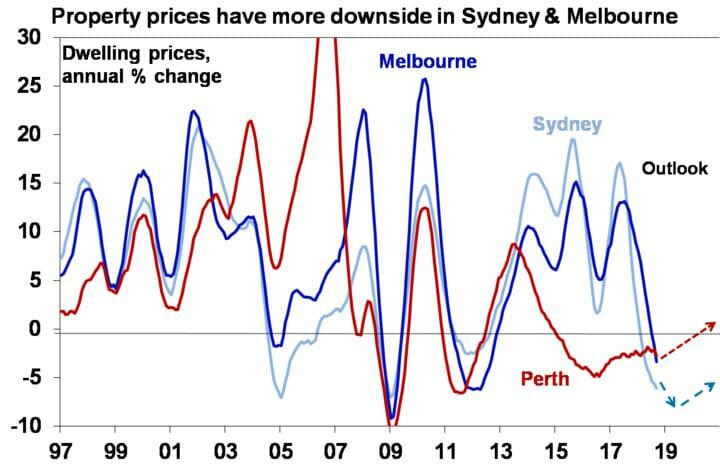 Against this back drop its not surprising to see the RBA leaving interest rates on hold again this month. Yes, the RBA can point to the continuing global expansion, above trend GDP growth, an increase in the terms of trade and an improving labour market. But against this, uncertainty remains high regarding consumer spending, underemployment remains very high, the drought will have a negative impact, house prices are continuing to fall in Sydney and Melbourne, credit conditions have tightened, and wages growth and inflation remain very weak. Our view remains that the RBA will keep rates on hold out to 2020 at least and the next move in rates could still turn out to be a rate cut given the risks around falling house prices and the threat this poses to consumer spending.

In the US, the focus will be on inflation with producer price data for September out on Wednesday and consumer price inflation data out on Thursday. The CPI is expected to show a fall in headline inflation to 2.5% year on year but core CPI inflation is expected to remain around 2.2%yoy which is consistent with inflation as measured by the private consumption deflator remaining around 2%yoy which is the Fed’s target. Small business optimism data will be released on Monday and is likely to remain very high. September quarter earnings results will also start to flow with corporate tax cuts and strong economic conditions expected to see profits up by over 20% from a year ago. Corporate commentary around the impact of tariffs and wages will be watched closely.

Chinese economic data for September will start to be released with credit data to be watched for evidence of the recent policy easing and trade data (Friday) expected to show a moderation in import growth to around 18% year on year but export growth remaining around 10% year on year.

In Australia we will get an update on confidence and housing finance. Expect the September NAB survey (Tuesday) to show continuing solid business conditions but more subdued confidence, consumer confidence (Wednesday) to show a slight improvement after its August fall and housing finance (Friday) to show continuing softness in loans to property investors. The RBA’s Financial Stability Review will also be watched closely given the house price downturn and fears that tightening lending standards risks turning into a credit crunch partly in response to the Royal Commission.

We continue to see the trend in shares remaining up as global growth remains solid helping drive good earnings growth and monetary policy remains easy. However, the risk of a correction over the next month or so still remains significant given the threats around trade, emerging market contagion, ongoing Fed rate hikes and rising bond yields, the Mueller inquiry, the US mid-term elections and Italian budget negotiations. Property price weakness and approaching election uncertainty add to the risks around Australian shares.

Low but rising yields are likely to drive low returns from bonds, with Australian bonds outperforming global bonds as the RBA holds and the Fed hikes.

National capital city residential property prices are expected to slow further with Sydney and Melbourne property prices likely to fall another 10% or so, but Perth and Darwin property prices at or close to bottoming, and Hobart, Adelaide, Canberra and Brisbane seeing moderate gains.

While the $A is now close to our target of $US0.70 it likely still has more downside into the $US0.60s as the gap between the RBA’s cash rate and the US Fed Funds rate pushes further into negative territory as the US economy booms relative to Australia. Being short the $A remains a good hedge against things going wrong in the global economy.