The pullback in shares could still have further to go but a deep (grizzly) bear market is unlikely as US, global or Australian recession are unlikely.

Increasing US Federal Reserve openness to a pause in raising rates, the likelihood of a US/China trade deal sometime in the next six months and the plunge in oil prices all add to confidence that a grizzly bear market is unlikely.

While global and Australian shares had a nice bounce from their late October lows – rallying about 5%, partly reversing their 10% or so top to bottom fall, they have since fallen back to their lows as the worries about US rates, bond yields, trade, tech stocks, etc, have morphed into broader concerns about global growth and profits. Fears of a credit crunch and falling home prices are probably not helping Australian shares either, which this week dipped below their October low. Our assessment remains that it’s too early to say we have seen the lows, but we remain of the view that it’s not the start of major bear market.

Very simply there are 3 types of significant share market falls:

I can’t claim the terms “gummy bear” and “grizzly bear” as I first saw them applied by stockbroker Credit Suisse a few years ago. But they are a good way to conceptualise them. Grizzly bears maul investors but gummy bears eventually leave a nicer taste (like the lollies). Corrections are quite normal and healthy as they enable the sharemarket to let off steam and not get too overheated. As can be seen in the next chart, excluding the present episode since 2012 there have been four corrections and one gummy bear market (2015-16) in global and Australian shares. Bear markets generally are a lot less common, but arguably what we saw in 2015-16 was a gummy bear market. 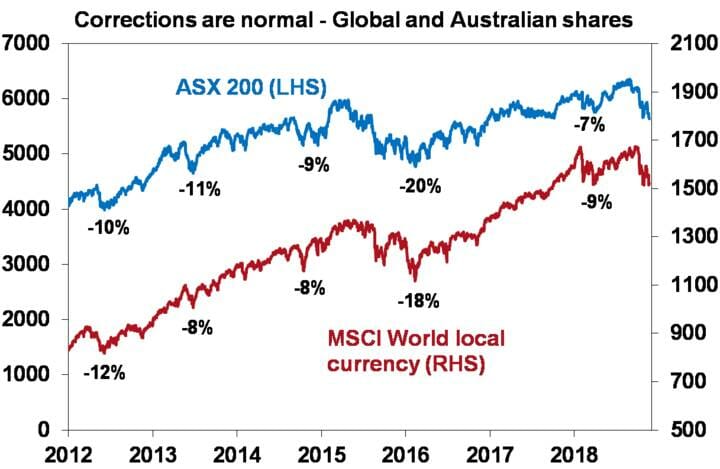 The next table shows conventionally defined bear markets in Australian shares since 1900 – where a bear market is a 20% decline that is not fully reversed within 12 months. The first column shows bear markets, the second shows the duration of their falls and the third shows the size of the falls. The fourth shows the percentage change in share prices 12 months after the initial 20% decline. The final column shows whether they are associated with a recession in the US, Australia or both.

Bear markets in Australian shares since 1900 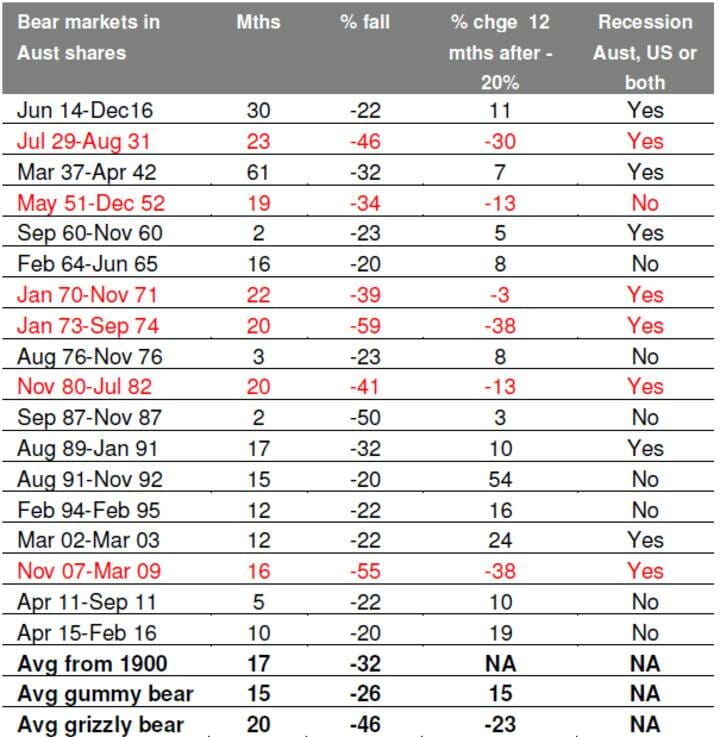 Based on the All Ords, excepting the ASX 200 for 2015-16. I have defined a bear market as a 20% or greater fall in shares that is not fully reversed within 12 months. Source: Global Financial Data, Bloomberg, AMP Capital

Second, the average rally over 12 months after the initial 20% fall is 15% for the gummy bear markets but it’s a 23% decline for the grizzly bear markets.

It’s also the case that US share market falls are much deeper and longer when there is a US recession.

What’s it likely to be this time?

Our view remains that a grizzly bear market is unlikely because, short of some unforeseeable external shock, a US, global or Australian recession is not imminent. In relation to the US:

Reflecting this, global earnings growth is likely to remain reasonable – albeit slower than it has been – providing underlying support for shares. In relation to Australia – yes housing is turning down and this will weigh on consumer spending, but it will be offset by a lessening drag from mining investment, strengthening non-mining investment, booming infrastructure spending and solid growth in export earnings. Growth is unlikely to be as strong as the RBA is assuming but it’s unlikely to slide into recession either.

So, for all these reasons it’s unlikely the current pull back in shares is the start of a grizzly bear market. However, we have already had a correction in mainstream global shares and Australian shares (with circa 10% falls) and with markets falling again it could turn into gummy bear market, where markets have another 10% or so leg down – a lot of technical damage was done by the October fall that has left investors nervous, the rebound from late October was not particularly convincing and many of the drivers of the October fall are yet to be resolved.

However, there are three developments that help add to our conviction that we are not going into a grizzly bear market. First, recent comments by Fed Chair Powell and Vice Chair Clarida indicate that the Fed remains upbeat on the US economy and a December hike looks assured (for now), but it is aware of the risks to US growth from slowing global growth, declining fiscal stimulus next year, the lagged impact of eight interest rate hikes and stock market volatility and appears open to slowing the pace of interest rate hikes or pausing at some point next year. The stabilisation in core inflation around 2% seen lately may support this. Past gummy bear markets (1987, 1998, 2011, 2015-16) all saw some pause or relaxation by the Fed.

Second, while it’s messy after the US/China standoff at the recent APEC forum there have been some positive signs on trade. Talks between the US and China on trade have reportedly resumed ahead of a meeting between President Trump and President Xi at the G20 summit next week and President Trump has repeated that he is optimistic of a trade deal with China and that the US might put any further tariff increases on China on hold if there is progress. The US/China trade dispute is unlikely to be resolved quickly when Trump and Xi meet. Perhaps the best that can be hoped for is agreement to have formal trade talks with the aim of resolving the issues and the US agreeing to delay any further tariff increases. With Trump wanting to get re-elected I remain of the view that some sort of deal will be agreed before the tariffs cause too much damage to the US economy. Rising unemployment (as fiscal stimulus will turn to contraction next year if current and proposed tariffs/taxes on China go ahead) and higher prices at Walmart will sink Trump’s re-election prospects in 2020. Of course, investors are now highly sceptical of any progress on the trade front. So any breakthrough in the next six months could be a big positive.

Finally, while the 30% plunge in the oil price since its October high is a short-term negative for share markets via energy producers, it has the potential to extend the economic cycle as the 2014-16 oil price plunge did. The main drivers of the fall in the oil price are slower global demand growth, US waivers on Iranian sanctions allowing various countries to continue importing Iranian oil, rising US inventories, the rising $US and the cutting of long oil positions. While oil prices are unlikely to fall as much as in 2014-16 when they fell 75% (as OPEC spare capacity is less now) they may stay lower for longer. This is bad for energy companies but maybe not as bad for shale producers as in 2015 as they are now less indebted and their break-even oil price has already been pushed down to $50/barrel or less. It will depress headline inflation (monthly US inflation could be zero in November and December) and if oil stays down long enough it could dampen underlying inflation. All of which may keep rates lower for longer. And its good news for motorists who see rising spending power. For example, Australian petrol prices have plunged from over $1.60 a litre a few weeks ago to below $1.30 in some cities. That’s a saving in the average weekly household petrol bill of around $10. 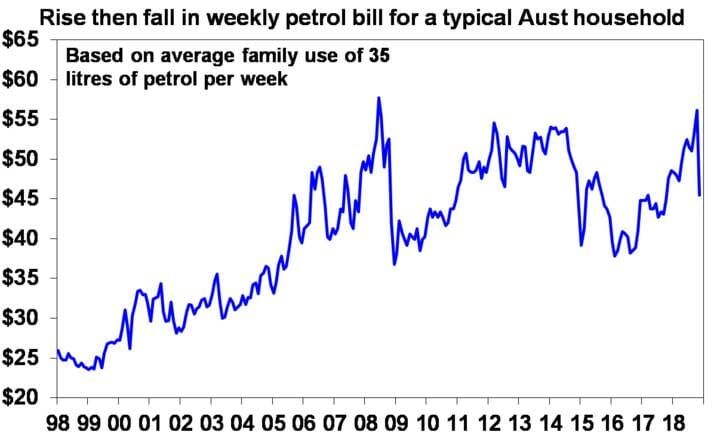