US, Eurozone, Japanese and Chinese shares fell over the last week on worries about global growth, but Australian shares pushed slightly higher on increasing expectations for rate cuts offsetting, for now, the negative impact of slowing growth. Bond yields fell as the ECB announced more monetary easing. Commodity prices were mixed with metals down but oil and iron ore up. The $A fell on increasing expectations for RBA rate cuts and as the $US rose.

There were three positives on the global policy/geopolitics front over the last week. First, reports indicate that the US and China are close to a trade deal and that President Trump is keen to announce a win on this ahead of his 2020 election campaign. Second, China’s National People’s Congress saw more policy stimulus announced (including a cut to the Value Added Tax rate equal to around 0.6% of GDP) with the growth target set at 6-6.5% for this year which is in line with market expectations. Finally, as widely expected the European Central Bank announced another round of cheap bank funding (which is a form of quantitative easing) and further pushed out its commitment to keep interest rates down. A settling of trade issues and a shift to policy stimulus (or at least more dovishness in the case of the Fed) is consistent with our view that global growth will improve into the second half this year and the combination of stronger growth supporting profits and still easy monetary policy will likely make this a good year for shares. The trouble in the short term though is that share markets have run hard from their December lows and, with global economic data still weak right now, they are vulnerable to a short term pull pack.

Doom and gloom on the Australian economy has gone into overdrive. Talk of recession is rife. Economists are falling over themselves in predicting rate cuts. My dog is as excited (if that’s the right word) about an impending recession as she was about Bitcoin 18 months ago! Maybe it’s the curse of The Economist magazine’s cover from last October. But there are five things you need to know about the Aussie economy. 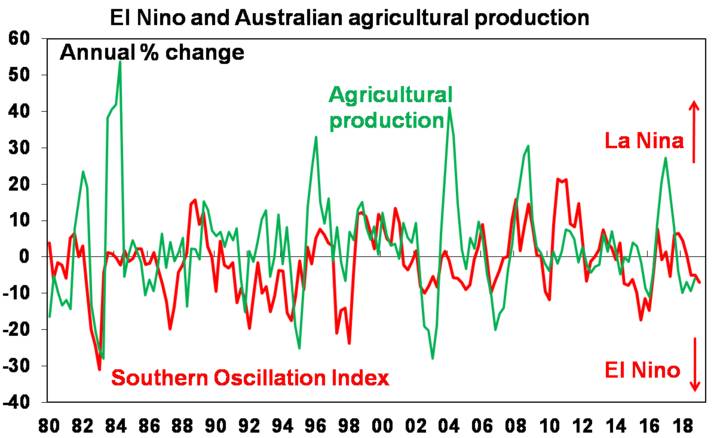 A rising risk facing the RBA is that the 2-3% inflation target will lose credibility. For several years now the RBA has been forecasting inflation to move back towards the mid-point of the target range. But as can be seen in the next chart these expectations have proven way too optimistic (and this has been the case for many forecasters, not just the RBA!). The danger is that the longer inflation remains below target the more it will be expected to remain down and the harder it will be to get it up as the experience in Japan and Europe demonstrates. All of which is an argument for the RBA to cut rates sooner rather than later. 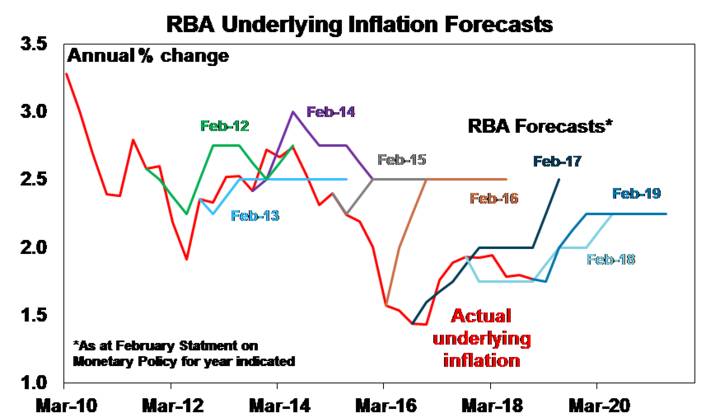 US data was mostly strong. The trade deficit widened in December and construction spending fell but against this the non-manufacturing conditions ISM rose very strongly, new home sales rose for the second month in a row and jobs growth looks to remain solid.

The European Central Bank has finally accepted reality and revised down its growth and inflation forecasts and announced another round of cheap bank funding conditional on lending to the private sector (what they call TLTRO) and pushed out its commitment to not raise rates out to the end of the year in response. Quite clearly it ended quantitative easing too early and is now seeking to correct the mistake. This is a move in the right direction and adds to confidence that Eurozone growth will stabilize and improve this year. That said the ECB may still have to do more as it not clear that it’s new round of TLTROs is aggressive enough.

Australian data released over the last week was decidedly soft. December quarter GDP growth was just 0.2% quarter on quarter with broad based weakness (apart from government demand) and ongoing signs that the housing downturn is impacting consumer spending and this followed similarly weak growth in the September quarter. What’s more, building approvals and retail sales remained weak in January, service sector conditions PMIs remained very weak in February and ANZ job ads fell further in February suggesting that weak growth will soon show up in slowing jobs growth and rising unemployment. On top of this the Melbourne Institute’s Inflation Gauge showed continuing below target inflation in February. It wasn’t all bad though with another spike in the trade surplus in January – although mainly due to gold exports it nevertheless highlights the strength in export prices and holds out the possibility that net exports will contribute to growth this quarter. Overall though it adds to the argument for the RBA to cut rates sooner rather than later.

In the US, expect a modest bounce back in January retail sales (Monday) after their December slump, February core inflation (Tuesday) to fall slightly to 2.1% year on year, durable goods orders (Wednesday) to show a modest gain and industrial production (Friday) to bounce back for February.

In the UK, it will be back to another round of parliamentary votes on Brexit on Tuesday on: May’s Brexit deal; a No Deal Brexit; a delay to March 29 Brexit date; and also on whether to have a second referendum. At this stage, parliament probably won’t support the Brexit deal (although its close), it will reject a No Deal Brexit and vote for a delay, but a new referendum likely won’t get up (just yet). We remain of the view that the final outcome will be either some sort of soft Brexit (as there is no majority in parliament for a No Deal or hard Brexit) or another referendum which turns into Bremain.

The Bank of Japan is not expected to make any change to its ultra easy monetary policy on Friday with indicators regarding growth and inflation remaining soft.

Chinese economic activity data for January and February (Thursday) are likely to show some further slowing in industrial production (to 5.7% yoy) and retail sales to 8.5%) but a slight acceleration in fixed asset investment (to 6%). Chinese growth may slow a bit further in the current quarter but with stimulus measures it’s likely to pick up into the second half.

In Australia expect to see a bounce in housing finance (Tuesday) but weaker readings for business confidence (also Tuesday) and consumer confidence (Wednesday).

Shares are likely to see volatility remain high with a high risk of a short term pull back, but valuations are okay, and reasonable growth and profits should support decent gains through 2019 as a whole helped by more policy stimulus in China, Europe and Australia and the Fed pausing.

National capital city house prices are expected to fall another 5-10% into 2020 led again by 15% or so price falls in Sydney and Melbourne on the back of tight credit, rising supply, reduced foreign demand, price falls feeding on themselves and uncertainty around the impact of tax changes under a Labor Government.