While US shares fell slightly over the last week with geopolitical noise not helping other major share markets including Australian shares continued to rise, arguably playing catch up to the rally in US shares. The Australian share market was led higher by health, IT, banks and industrial shares. Bond yields generally rose as did oil and metals, but iron ore prices continued to retrace some of the Vale accident driven rally. The $A fell slightly despite a lower $US as rate cut talk continued.

The past week provided a reminder that geopolitical risks remain with US Trade Rep Lighthizer dampening expectations of a trade deal with China, Trump’s former lawyer Michael Cohen’s Congressional testimony adding fuel to Trump impeachment fears, the second Trump/Kim Jong Un summit ending abruptly with no agreement on de-nuclearisation after Trump walked (again) on differences over removing sanctions and tensions flaring up between Pakistan and India. Each of these are unlikely to cause a major problem:

But with shares up dramatically from their December lows (by 19% in the US, 16% globally and 13% in Australia), up against resistance and overbought – at a time when global growth is still softening – one or several of these geopolitical risks could provide a trigger for a short term pull back in share markets. Our view remains though that it would just be a pull back/re-test as opposed to the resumption of last year’s falls as policy stimulus and an improvement in global growth should help ensure that shares have a reasonable year.

US data was mixed over the last week, but the good news is that forward looking indicators are moving up. December quarter GDP growth slowed but to a stronger than expected annualised pace of 2.6% thanks to solid growth in consumer spending and business investment. More negatively housing starts fell a sharp 11% in December. However, permits to build new homes held up in December, pending home sales bounced in January after several weak months, consumer confidence rose sharply in February and various regional manufacturing surveys showed improvement too. So while GDP growth is likely to slow further this quarter (partly due to weather related seasonal weakness) we see it picking up again into the second half. Meanwhile Fed Chair Powell provided no surprises in indicating that current conditions are “healthy” and the outlook is “favourable” but there are some “cross currents and conflicting signals” so the Fed is “patient” and “will continue to be data dependent.” We expect the pause on interest rate hikes to continue into the second half.

Japanese jobs data remained strong in January, but this is being helped by the falling population and meantime industrial production fell sharply in January.

Chinese official business conditions PMIs fell a bit further in February, but the services sector continues to hold up well, manufacturing sector new orders rose and the Caixin manufacturing conditions PMI rose suggesting policy stimulus may be starting to impact, particularly for smaller businesses which had been harder hit by the slowdown.

Australian data was generally soft. House prices continued their slide in February, credit growth remained soft in January with housing credit growth slowing to its weakest on record and construction activity showed broad based falls in the December quarter. Against this, plant and equipment investment saw a modest rise in the December quarter and business investment plans continue to improve suggesting that business investment should help contribute to keeping the economy growing as the housing cycle turns down.

CoreLogic data showed that the slide in home prices continued in February with national capital city prices now down 8.6% from their September 2017 high. Tight credit (which will be given another boost along from mid-year by the start-up of Comprehensive Credit Reporting which will see banks crack down on borrowers with multiple undeclared loans), the switch from interest only to principle and interest loans, record unit supply, issues around new building quality after problems with various unit towers, an 80% or so collapse in foreign demand, fears that negative gearing and capital gains tax arrangements will be made less favourable if there is a change of government and falling prices feeding on themselves are driving a perfect storm for the Sydney and Melbourne property markets, with Perth and Darwin still falling sharply and most other cities pretty soft. We see Sydney and Melbourne home prices falling another 15% or so as part of a total top to bottom fall of 25%, which with little change in average prices across other cities will see national average home prices fall another 5 to 10%. While this will be a drag on economic growth it’s unlikely to drive a recession as property price weakness will mainly be concentrated in Sydney and Melbourne, the growth drag from falling mining investment is fading, non-mining investment is trending up and infrastructure spending is rising, the RBA can and we think will cut interest rates again and a likely further fall in the Australian dollar will help support growth. 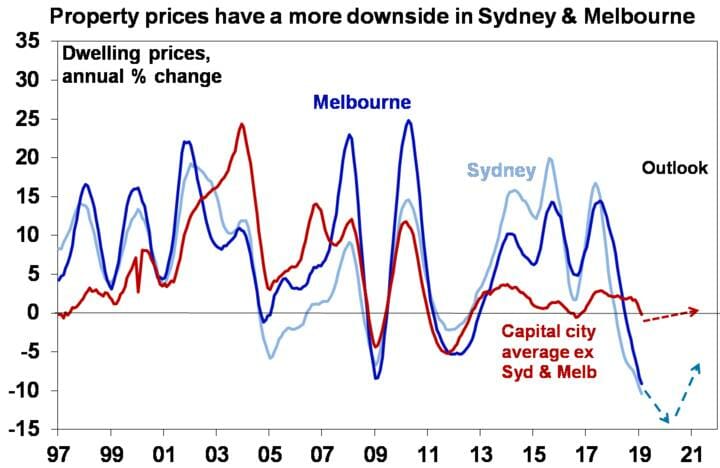 The Australian December half earnings reporting season is now complete and while better than feared it showed a slowdown for companies exposed to the domestic economy and caution regarding the outlook. 54% of companies have seen their share price outperform on the day of reporting (which is in line with the long term average), but only 38% have surprised analyst expectations on the upside which is below the long run average of 44%, 36% have surprised on the downside which is above the long run average of 25%, the proportion of companies seeing profits up from a year ago has fallen to 59% and only 52% have raised their dividends which is a sign of reduced confidence in the outlook – six months ago it was running at 77%. Concern has been most intense around the housing downturn and consumer spending. While 2018-19 consensus earnings growth expectations have drifted up to 5% (from 4.3% at the start of the reporting season) this was due to an upgrade for resources stocks as higher iron ore prices were factored in. For the rest of the market consensus earnings expectations have slipped to just 2% reflecting the tougher domestic environment. While several cashed-up companies announced special dividends ahead of Labor’s proposed excess franking credit cutback, overall dividend upgrades have fallen. 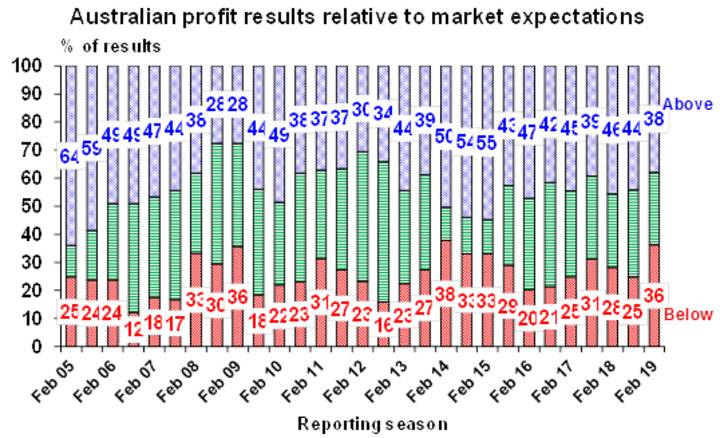 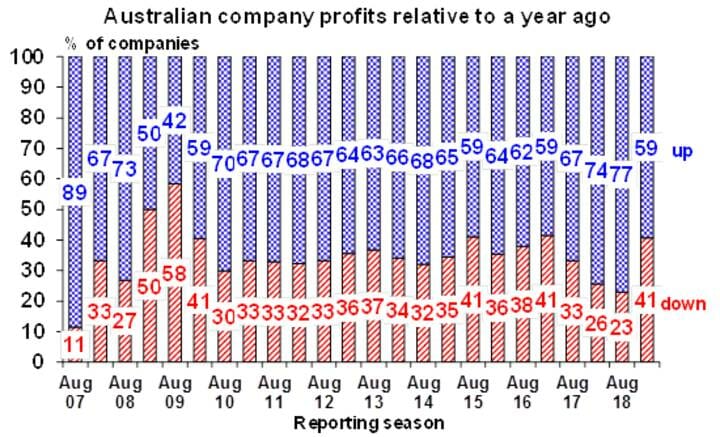 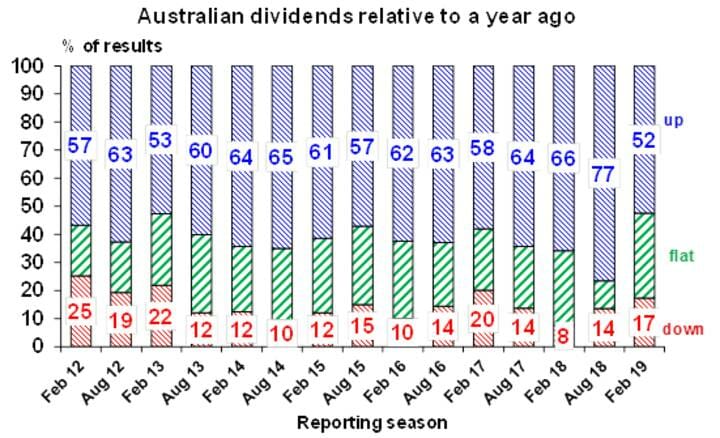 In the US the focus will be on Friday’s February jobs data which is expected to show solid payroll growth of 180,000, a fall in unemployment to 3.8% and wages growth of 0.3% month on month or 3.3% year on year. In other data expect the non-manufacturing conditions ISM to have remained strong at around 57 and new home sales to rise slightly (both due Tuesday), the trade balance (Wednesday) to worsen and January housing starts (Friday) to show a bounce after December’s fall. The Fed’s Beige of anecdotal evidence will also be released.

The European Central Bank (Thursday) is expected to announce or foreshadow a new round of cheap bank financing (LTRO) to help arrest the slowdown in economic growth seen over the last year.

The Reserve Bank of Australia is expected to leave interest rates on hold for the 28th meeting in a row when it meets Tuesday and to reiterate its balanced or neutral outlook for interest rates. Outside of the monthly labour force reports Australian economic data has been mostly soft lately and our view remains that the RBA will cut the cash rate twice this year taking it down to 1% as the housing slowdown cuts into growth and threatens the inflation outlook. But the first cut is unlikely until around August after the RBA gets to see the outcome of the April Budget and the Federal election and revises its growth and inflation forecasts down further.

On the data front in Australia, expect December quarter GDP growth (Wednesday) of just 0.2% quarter on quarter or 2.4% year on year reflecting continuing weak consumer spending, weak construction activity and a zero contribution to growth from trade only partly offset by strength in public spending. Monthly data releases are expected to show a bounce in building approvals (Monday) after a few months of sharp falls, a 0.4% rise in December retail sales and a reduced trade surplus of $2.5bn (both due Thursday).

Shares are likely to see volatility remain high with a high risk of a short term pull back, but valuations are okay, and reasonable growth and profits should support decent gains through 2019 as a whole helped by more policy stimulus in China, Europe and Australia and the Fed pausing.

National capital city house prices are expected to fall another 5-10% into 2020 led again by 15% or so price falls in Sydney and Melbourne on the back of tight credit, rising supply, reduced foreign demand, price falls feeding on themselves and uncertainty around the impact of tax changes under a Labor Government.