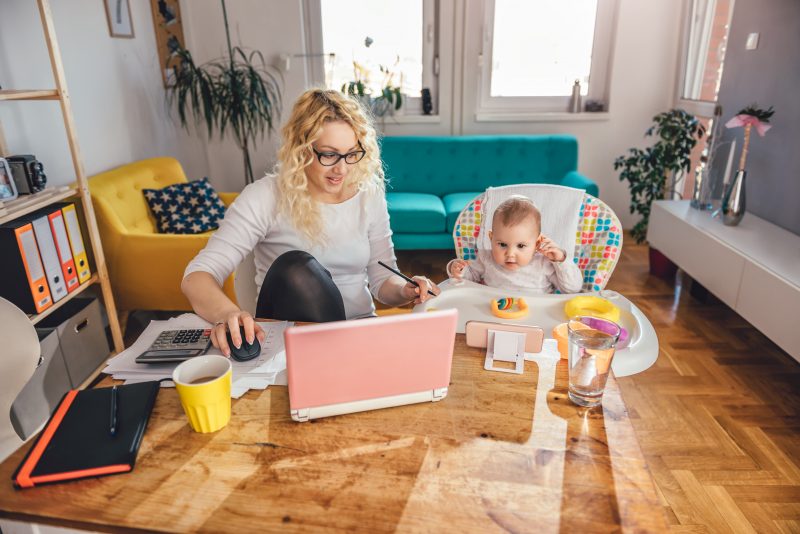 The future for working mothers

On Mother’s Day 2018, we explore some of the challenges currently facing working Mums in Australia and whether they can expect better career opportunities, rewards and work-life balance in the future.

According to the Workplace Gender Equality Agency, women take home on average $251.20 less than men each week (based on full-time adult earnings), creating a national gender “pay gap” of 15.3%1. This means that women, on average, must work an extra 56 days per year to earn the same as their male counterparts.

“The effect of the 15.3% pay gap is a significant number drilled down further to the superannuation gap,” says Fran Hughes, CERTIFIED FINANCIAL PLANNER® professional and Director at Intuitive Money. “Women are estimated to miss out on almost $100,000 of their potential retirement savings, giving them 47% less super than men on average. This means women will have to work, on average, 12 years longer than men to secure the same amount for retirement2.”

For Mums, the extra work doesn’t stop there. After having their first child, the average amount of time a womaen spends caring for others skyrockets from just two hours to a massive 51 hours a week3. This huge contribution women make to Australia’s “unpaid economy” was highlighted in a PwC report from March 2017. According to their calculations, placing a conservative dollar value on the replacement cost of unpaid childcare would make it the largest industry in Australia, bigger than any in the formal economy4. And Australian women are responsible for delivering 76% of unpaid childcare, compared with 24% for men5.

Given all the time Mums are spending on unpaid childcare, it’s no wonder a recent OECD report flags low workforce participation for young women as a potential obstacle to economic growth in Australia. The 2017 report declared young women who stay at home to look after children are “the greatest untapped potential” in the Australian workforce and “there are potentially large losses to the economy when women stay at home or work short part-time hours6.”

Challenge 3: Fitting it all in

So if Mums manage to pack full-time work and childcare into their schedule, it’s good for the economy. But while they may also benefit financially from their dual commitment, what about the price they’re paying to have a career and a family? Hour-glass ceilings: Work-hour thresholds, gendered health inequities, a research study published in 2017, seeks to determine the tipping point where the number of hours we spend in paid employment begins having a negative impact on mental health. The report concludes that this tipping point can shift when there are “gendered workloads and constraints on and off the job.” In other words, if much of your time is taken up with childcare and other unpaid labour, you’re likely to be at greater risk of mental health problems from working longer hours in your job.

“Single mums, in particular pay a very high price for having a career as their work/life commitments stretch them to their limits, forcing a sacrifice of either career or kids” says Fran. “The financial results of this choice they’re having to make are drastic. In 2012, approximately 40% of older single women in retirement were living in poverty, as well as having a higher dependency on the age pension than men7.”

It’s no surprise then that women value opportunities for flexible working arrangements so they can commit to career and kids without risking their wellbeing. In PwC’s 2018 report Time to talk: what has to change for women at work, 95% of 3627 professional women surveyed feel it’s important to have flexibility so they can balance the demands of career and family/ personal life8. But on the other hand, a significant number of Australian women taking part in the survey were concerned that becoming a Mum9 and taking advantage of flexible working arrangements10 could damage their career prospects.

It seems a genuine balance between childcare and paid work isn’t something many Australian women can expect to achieve right now. Political journalist, writer and broadcaster, Annabel Krabb describes the predicament that most working women find themselves in. “The obligation for working mothers is a very precise one: the feeling that one ought to work as if one did not have children and while raising one’s children as if one did not have a job,” writes Krabb in her book The Wife Drought.

With these challenges stacked up against them, should our working Mums resign themselves to choosing between career and family, or doing both and risking their health and well-being? The good news is the business case for gender equality is growing stronger every day, with women being more widely recognised for the immense value they bring to the workplace.

Survey results from the Gartner Global Talent Monitor report for the fourth quarter of 2017 show that Australian women work around 7% harder than men11. If employers want staff who will go above and beyond in their level of effort on the job, women have the edge according to these figures.

“I learned early on, as an employer of 30-40 staff, to recognise the benefits of creating a high trust culture” says Fran. “Expectations around job requirements were set in place with the focus on outcomes rather than fixed working hours. A flexible work environment, where employees — within job expectations — can decide their hours, place and way of working produces higher productivity, with women working harder in the time they have available and feeling more fulfilled.”

In their 5-year worldwide study of 50,000 staff, Sodexo explored the impact of gender balanced management teams have on a whole range of business performance metrics including operating margins, client satisfaction and employee retention. Results from their research show that teams with a ratio between 40-60% women to men achieved better results across every key performance indicator12.

A magic wand for the gender pay gap

Having identified a 2% gender pay gap in their remuneration, EnergyAustralia made an important announcement on International Women’s Day 2018. They allocated a budget of AUD$1.2 million to make that gap disappear by April 2018. Around 350 women employed by EnergyAustralia will benefit from the change through an annual salary review. Many are expected to receive an additional one-off adjustment to ensure that women and men with equivalent experience and skills receive the same pay for doing the same job.

“I’m proud of the good progress we’ve made in the past four years with hiring women to senior roles, the make-up of our workforce and in remuneration generally,” said EnergyAustralia Managing Director Catherine Tanna. “But it’s not right or fair to expect women to have to wait any longer for the pay gap to close – so, we’re fixing that right now13.”

If more employers start paying attention to these facts and figures about women and business — and change their policies and workplace culture as a result — we could be looking at a very different future for working Mums in Australia.

Planning to have kids and keep working? Find out more about staying ahead financially as a working Mum and discover some steps you can take to prepare your finances for starting a family.

[3]  Australian Institute of Family Studies, Mothers still do the lion’s share of housework Research summaries— May 2016, “New mothers go from spending a weekly average of 2 hours caring for others to a whopping 51 hours.” https://aifs.gov.au/publications/mothers-still-do-lions-share-housework

[4]  PricewaterhouseCoopers Understanding the unpaid economy report, March 2017, “Childcare should be regarded as Australia’s largest industry. Quantifying and valuing the time spent by on unpaid child care implies that it is a $345 billion sector (in 2011 terms), almost three times the financial and insurance services industry, the largest industry in the formal economy.”

[8] PricewaterhouseCoopers Time to talk: What has to change for women at work, March 2018 https://www.pwc.com/gx/en/about/diversity/iwd/international-womens-day-pwc-time-to-talk-report.pdf

[9] PwC Australia, Women worried family will stall career, 8 March 2017 “45% are nervous about the impact starting a family might have on their career” https://www.pwc.com.au/press-room/2018/women-worried-family-will-stall-career.html

[11] Gartner, Global Talent Monitor 4Q 2017, Australia Talent Trends, “Survey data shows women are the driving force behind growing effort levels in Australian workplaces. Discretionary effort among Australian female employees is almost 7% higher than their male colleagues, meaning women are more likely to go above and beyond for their employer.” https://www.cebglobal.com/top-insights/global-talent-monitor/australia.html