Why rates aren’t going up in Australia Here’s 4 reasons why:

It wasn’t so long ago that everyone was wondering when rates were going to rise. Now it’s looking like we will be waiting for a while before the Reserve Bank of Australia puts up official rates.

We don’t expect the RBA to raise rates until 2020.

How is this so, you may ask, given inflationary fears are playing some havoc with stock markets, particularly in the US?

Indeed, the global economy is seeing its fastest growth in years and the US Federal Reserve has increased rates five times since December 2015 and is on track for more hikes this year.

But the Australian economy is in a vastly different position. Here’s four reasons why:

1) Growth is below expectations

This is a case of the negatives outweighing the positives. Mining and non-mining investments are rising; infrastructure investment is booming, and net exports should add to growth helped by strong global conditions.

However, housing construction is slowing, and consumer spending is constrained with downside risks around slow wages growth, high debt levels and falling house prices in Sydney and Melbourne.

Personal tax cuts tabled in the Budget will help keep the consumer going but were minor. So, while growth has improved from the 2.4 per cent pace seen last year, it is likely to be to remain roughly between 2.5 and 3 per cent, below RBA expectations for a pick up to 3.25 per cent.

2) Wages and inflation to remain low

Growth is unlikely to be strong enough to eat into significant spare capacity in the Australian economy.

Continuing weak wages growth along with excess capacity and high levels of competition in goods markets will keep underlying inflation around the low end of the RBA’s 2-3 per cent target for a lengthy period yet.

Some say Australian rates just follow those in the US, but there has been a big divergence in recent years. In 2009 while the Fed left rates near zero the RBA started raising rates only to start cutting them from 2011. And while the Fed started hiking rates in 2015 we continued cutting them in 2016. 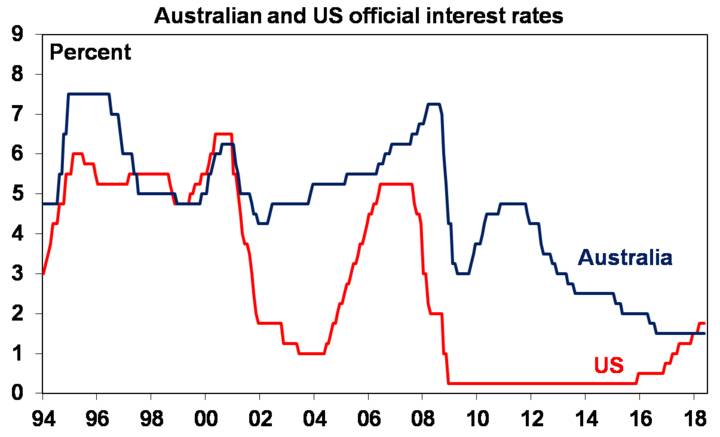 Banks tightened lending standards around interest-only loans and loans to investors a few years ago. Recently the Australian Prudential Regulatory Authority toughened its requirements for banks, including the need for better checking of income and expenses and constraints in terms of the number of loans going to high total debt to income borrowers. This will particularly hit lower-income borrowers and high home price to income markets like Sydney and Melbourne. This is basically doing some of the RBAs job for it and so takes pressure off the RBA to raise interest rates. While a credit crunch is unlikely it’s hard to reliably predict the impact of tighter lending standards.

There has been a slowdown in property price growth led by a fall in prices in Sydney and Melbourne. APRA measures to constrain investor and interest only borrowers have worked. These measures, combined with poor affordability, rising unit supply, falling expectations for price growth and the end of FOMO (fear of missing out) are pushing prices down.

As a result of these considerations, we have pushed our timing regarding the start of interest rate increases into 2020. Of course, the risk here is that by 2020 the US economy may be weakening making it hard for the RBA to then start considering rate hikes.

And of course, if the declines in home prices turn out to be deeper the next move could end up being a cut.