Trade fears took a bit of a back seat over the past week allowing investors to focus on positive underlying fundamentals including good US earnings results, which saw most major share market rise. This included the Australian share market which is having another go at breaking through the 6300 level helped by industrial, financial, telco and consumer shares. Chinese shares slipped again though. Bond yields were little changed, commodity prices mostly fell and the $US rose which contributed to a fall in the $A.

Trump’s performance over the last two weeks created the usual excitement from a political perspective. From an investment perspective, there are three points worth noting. First, his comments critical of Fed rate hikes naturally raise concern about political interference at the Fed which could threaten its ability to control inflation. In the short term its hard to see much impact. Trump is well known to be a high debt/low interest rate guy so it’s no surprise he is not happy. But the Fed answers to Congress, has a mandate to keep inflation down and will do what it sees best – which in an environment of strong growth and inflation at target is continuing to return interest rates to more normal levels. Longer term there is a risk though that Trump and populism will weaken the institution of an independent central bank targeting low inflation and this would be a big concern. Second, his treatment of his NATO allies may not augur well for quick progress on the trade front and his consideration of tariffs on uranium imports (which could impact Australia – but only marginally as uranium is less than 0.2% of our total exports and we would probably get an exemption anyway) and lack of progress towards resuming talks with China highlights that the trade risk continues to rise. Finally, his attitude towards the Mueller inquiry continues to remind of Nixon in relation to Watergate. That said we still see Trump’s impeachment/removal from office as unlikely and economic conditions are far stronger today than in 1974.

China continuing to ease and the Renminbi sliding. While Chinese growth slowed only slightly in the June quarter the policy easing of recent months has continued with official calls to increase lending and signs of PBOC support via its medium-term lending facility. This is likely aimed at offsetting weak shadow banking credit growth and the trade threat. Of course, a tightening Fed and an easing PBOC helps drive a rising $US relative to the Renminbi and that is what we are seeing with the $US up around 8.5% against the Renminbi since early this year just as its up by 7.5% against a range of other currencies. As such the fall in the Renminbi is mostly a strong $US story rather than a weak Renminbi story, but the Chinese authorities are likely happy for now in seeing the Renminbi fall given the tariff threat to Chinese growth, so it likely has downside. The falling Renminbi in turn risks maintaining downwards pressure on emerging market currencies keeping alive fears of emerging market debt servicing problems and maintaining downwards pressure on emerging market shares. 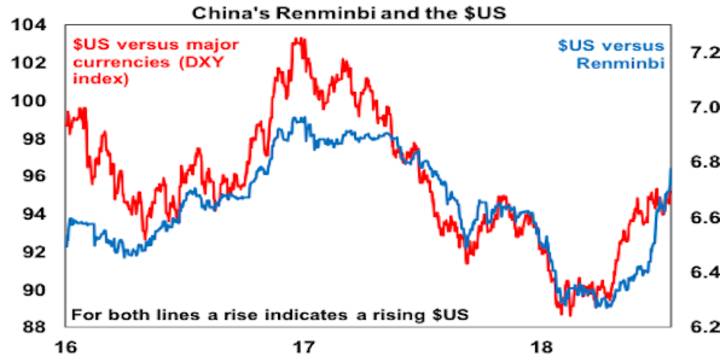 If the stability of the IMF’s global economic forecasts is any guide the process of economists upgrading their expectations and likewise share analysts revising up their profit forecasts that helped propel markets last year looks to have come to an end, with the IMF (and everyone else) now highlighting the obvious downside risks of a trade war and rising US inflation. That said, global growth at 3.9% is still strong and should underpin solid earnings growth even if it’s off its peak. 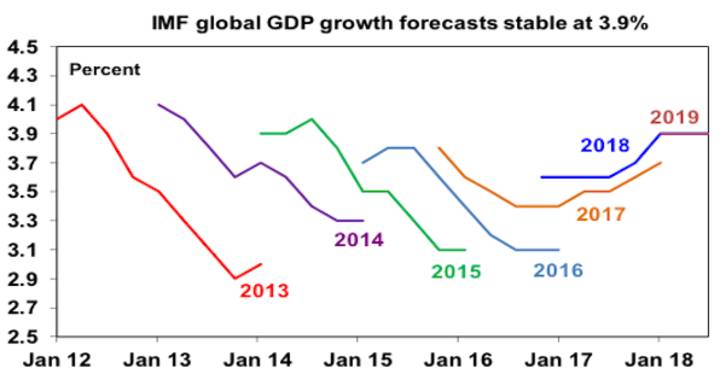 US economic data remains strong with good gains in retail sales, industrial production and leading indicators, the lowest level of jobless claims since when The Brady Bunch started in 1969 and solid regional business conditions surveys and home builder conditions. Housing starts fell in June but this looks like an aberration given the strength in the NAHB home builder conditions index. Fed Chair Powell’s latest comments remained upbeat consistent with continuing gradual (every three months) rate hikes “for now”.

US June quarter earnings reports are off to a strong start with 95% of results so far beating on earnings and 80% beating on sales and earnings growth expectations being revised up from 21% for the year to the June quarter to now 23%. That said its early days yet with less than 20% of results out.

Japanese inflation ex fresh food and energy surprisingly fell to just 0.2% yoy in June. There will be no rush for the exit from easy money for the Bank of Japan on the back of this.

Chinese economic growth slowed fractionally in the June quarter to 6.7% year on year from 6.8% and June monthly data was mixed with industrial production and investment slowing but retail sales and house price growth picking up and unemployment unchanged at 4.8%. We anticipate a further slowing in Chinese growth to around 6.5% this year.

Australian jobs data was a mixed bag with robust employment growth, but this is only keeping up with new entrants to the labour market thanks to strong population growth and gains in participation keeping unemployment at 5.4%. Strong jobs growth helps household income but it’s being offset by softness in wages which with still high unemployment and underemployment is unlikely to change any time soon.

While the return of the line about the next move in rates more likely being up in the minutes from the RBA’s last meeting caused some excitement, I wouldn’t read much into it. Its broader comments remain neutral with “no strong case for any near-term adjustment” in rates. Meanwhile, the RBA is still not too fussed by higher money market funding costs but noted “it was uncertain how persistent these pressures would be”. If they do persist then it’s a defacto monetary tightening and would mean a lower than otherwise cash rate outlook. Since the end of the financial year the Australian bank bill spread to the cash rate has fallen but at 50 basis points it remains high relative to its long-term average of around 25 basis points meaning ongoing pressure on the big banks to modestly raise some of their mortgage rates 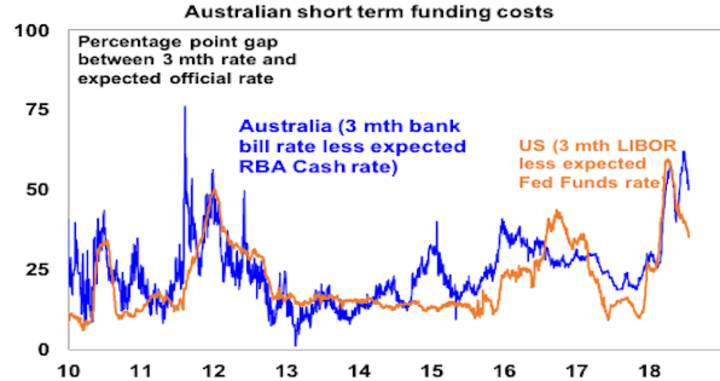 The European Central Bank (Thursday) will leave monetary policy unchanged having already foreshadowed a phasing down in its quantitative easing program through the December quarter. With recent growth indicators being mixed and core inflation back below 1% President Draghi is likely to remain dovish particularly given the risks around global trade. We remain of the view that an ECB rate hike is unlikely until 2020 at the earliest. July business conditions PMIs (Tuesday) will likely remain solid at around 55.

In Australia, consumer price data is likely to show inflation remaining at or around the low end of the RBA’s 2-3% target range, consistent with official interest rates remaining on hold for an extended period. Expect headline inflation of 0.5% quarter on quarter or 2.2% year on year with seasonal increases in health costs, tobacco excise and a 7% rise in petrol prices but softness in prices for food, clothing, communication and education. Underlying inflation is expected to be around 0.5% qoq and 1.9% yoy.

While we continue to see share markets as being higher by year end as global growth remains solid helping drive good earnings growth and monetary policy remains easy, we are likely to see more volatility and weakness between now and then as the US driven trade skirmish could get worse before it gets better and as worries remain around the Fed, President Trump in the run up to the US mid-term elections, China, emerging markets and property prices in Australia. In the very short term there is now a good chance that the Australian ASX 200 index will hit our year-end target of 6300 early.