Share markets mostly rose over the last week as economic and profit news was mostly favourable and there was nothing really new on the trade war front. Bond yields generally fell slightly but there wasn’t a lot in it. Commodity prices were mixed with oil down, metals flat to up a bit and iron ore up. The $US pushed higher and the $A fell slightly.

The drip feed ramping up tariff pressure on China continued over the last week with the US announcing that it will commence a 25% tariff on another $16bn of imports on August 23rd. This is no surprise though as its just the remainder of the initial $50bn they said they would do but only did $US34bn in July. So was China’s announcement of same sized retaliation. So far there is still no sign of a return to negotiation and the likelihood is that it won’t happen until after the US mid-terms. Domestically there has been some criticism of President Xi Jinping’s handling of the trade issue with the US but his position is not threatened and there is little sign of him changing direction. The big one to watch will be next month when the US has threatened a 10% or 25% tariff on $US200bn of imports. China’s proposed retaliation of an average 13% tariff on $US60bn of imports from the US is way less than proportional begging the question of whether its backing down a bit or preparing to move into retaliation via other means as it runs out of imports to retaliate on – this could take the form of tougher taxation or regulation of US companies or maybe allowing a steeper fall in the Renminbi, which would then beg the question as to how the US might respond, eg more tariffs or maybe even intervention to soften the $US, ie “currency wars”. I don’t expect the US to intervene in the $US but with Trump not interested in basic economics (or showing any awareness that his own policies have pushed the $US up) it’s a risk worth watching. The trade threat clearly has a long way to go yet.

Drought is increasingly becoming a significant threat to Australian growth. Flying to beautiful Townsville and back this past week I was struck by how parched much of the east coast of Australia looks thanks to drought. There has not been a lot of talk about its economic impact so far. Most Sydneysiders don’t worry about drought until water restrictions are imposed but because heavy rainfall earlier last year pushed Sydney’s catchment dams to 97% full so far there has been no need for water restrictions. But total Sydney dams have now fallen to near 66% full and the national reality is that the drought is becoming a bigger threat. In fact, farm production has already fallen for each of the last four quarters. Of course, agricultural production as a share of GDP ain’t what it used to be at just 2.5%. But a 25% slump in agricultural production as seen through past major droughts will knock 0.6 percentage points off economic growth. Unfortunately, summer weather forecasts don’t hold out a lot of hope for a quick end to the drought and it would be made a lot worse if another El Niño phenomenon arrived (with the Southern Oscillation index recently falling back from a mild La Nina to neutral). Of course, beyond a short term boost to meat supply as farmers cut their herds, the drought will also provide a boost to headline inflation via higher food prices, but the RBA, will look through this given the dampening impact on underlying inflation from weak farm sector spending power. 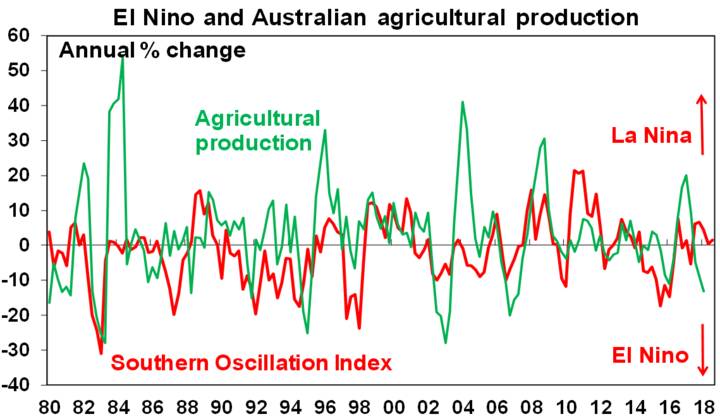 For fans of The Brady Bunch the past week or so was an exciting one with NSYNC bass singer Lance Bass announcing he had won the bid for the family home, but then getting gazumped by Discovery Inc’s HGTV who want to use the house for a reality TV show. That said I thought The Brady Bunch was reality – it certainly inspired me to buy at various points a big Chrysler station wagon, and equal sized Pontiac convertible and later on a Brady Bunch style house. It also made it virtually impossible for me to go to sleep on an angry heart. The sale does highlight the magic of compound interest over many years generating capital growth of at least 8% since the owners purchased it in 1973 and if it had been rented out with a net rental yield of 3.5% a total return of around 11.7% pa.

US labour market data remains strong with ultra-low jobless claims and ongoing very high readings for job openings, hiring and workers quitting for new jobs.Producer price inflation came in slightly weaker than expected in July but with core producer prices up 2.7% year on year its consistent with gradually rising inflation pressure and continued gradual Fed rate hikes. Meanwhile, the June quarter profit reporting season is wrapping up on a strong note with earnings up around 27% on a year ago. With 90% of S&P 500 companies having reported, 83% have beaten on earnings by an average beat of 5.4% and 71% have beaten on sales.

Japan saw some good news on wages, with nominal wages growth lifting to 3.6% year on year in June, which is highest in years. The very tight labour market with sub 3% unemployment may at last be leading to higher wages growth. That said, a sample change early this year may be a contributor, so the Bank of Japan will treat this cautiously. GDP growth also bounced back in the June quarter albeit its low at 1.1% yoy. Not so positive though were household spending, economic confidence and machinery orders. The overall impression is that Japan continues to grow but at a relatively constrained rate – which is not so bad given its falling population.

Despite the trade war threat Chinese exports and imports came in stronger than expected in July. However, imports may have been boosted by a cut to Chinese tariffs. Meanwhile inflation readings were benign in July, indicating that inflation provides no constraint to further policy stimulus in China.

In Australia, the RBA provided no surprises in leaving rates on hold for a record two years and given the cross currents in the economy there is a good chance they could be on hold for another two years. The RBA’s largely unchanged forecasts in their Statement on Monetary Policy portraying a “favourable outlook” (in the words of Governor Lowe) of growth around 3.25% and a gradual rise in inflation along with strong infrastructure investment, rising business investment and strong export volumes are consistent with the next move in rates being a hike. But the peak in the housing construction cycle, uncertainty about the outlook for consumer spending, the weakening Sydney and Melbourne property markets, the worsening drought, the risks that low inflation and wages growth will continue for longer and tight bank lending standards all indicate that the next move in rates could well be a cut. So the stand-off continues and the RBA will remain on hold for a while to come. On balance, we agree with the RBA that the next move in rates will probably be a hike, but we are a bit less upbeat on growth, wages and inflation than the RBA, so any rate hike is unlikely to come until 2020 at the earliest and there is a rising risk that the next move will actually be down. Maybe the Reserve Bank of NZ is showing the way in noting that “The direction of our next [interest rate] move could be up or down”!

Meanwhile, housing finance commitments continued to soften in June mainly driven by a a decline in finance going to investors which looks to reflect both supply as banks continue to tighten lending standards and demand as investors expectations for capital growth slide in response to falling prices, suggesting that a negative feedback loop between falling prices and falling investor demand may be developing.

The flow of June half profit results picked up a notch over the last week with okay but uninspiring results. So far 47% of results have surprised on the upside but 33% have surprised on the downside both of which are higher than average, 67% of results have seen profits up on a year ago which is around average, 71% of companies have increased their dividends from a year ago but a higher than normal 21% have cut them. That said less than 15% of companies have reported so its too early to conclude much.

In the US, expect solid gains in July retail sales and industrial production data along with continued strength in home building conditions (all due Wednesday) and a rebound in housing starts (Thursday).

Chinese economic activity data for July due Tuesday is likely to show a slight pick up in industrial production growth to 6.3% year on year and in retail sales growth to 9.1%, but investment growth remaining around 6%.

The Australian June half earnings reports will start to ramp up with 43 major companies reporting including BlueScope, Bendigo Bank and JB HiFi (Monday), Challenger (Tuesday), CSL, Fairfax, Woodside, IAG and Wesfarmers (Wednesday), ASX, Telstra and Origin (Thursday) and Cochlear (Friday). We are expecting 2017-18 earnings growth to come in around 9%, with resources earnings up 25% (albeit down from 130% in 2016-17) thanks to solid commodity prices and rising volumes and the rest of the market seeing profit growth of around 5%. Dividend growth is likely to remain solid.

While we see share markets being higher by year end as global growth remains solid helping drive good earnings growth and monetary policy remains easy, we are likely to see ongoing bouts of volatility and weakness as the US driven trade skirmish with China could get worse before it gets better and as worries remain around the Fed, President Trump in the run up to the US mid-term elections, China, emerging markets and property prices in Australia.