The past week has been a roller coaster ride in equity markets. Shares initially rose on the positive outcome from the Trump/Xi meeting. Then they plunged in a panic as investors lost faith in what Trump claimed was agreed, the arrest of a senior Huawei executive in relation to a possible violation of sanctions on Iran raised concerns it will threaten US/China negotiations and concerns grew about the US economic outlook as parts of the US yield curve went negative (or inverted). Then they rebounded in the US after having fallen back to October and November lows, possibly helped by reports that the Fed is considering a wait and see approach after a December hike. This still saw US, Eurozone and Japanese shares down for the week (albeit reversing the previous week’s gains), but Chinese shares rose and Australian shares rose (don’t forget they fell in the previous week). Growth worries also pushed bond yields lower & commodity prices were mixed with oil up but not helped by the failure of OPEC to agree a production cut (yet). The $A fell from its highs but still managed a slight gain for the week.

It’s still too early to say shares have seen the bottom. So far what we have seen is just a correction (with global and Australian shares having had falls around 10%) and shares may be trying to build a base, with US/global shares holding around their October lows, ahead of a year-end Santa rally. But investor scepticism remains very high evident in good news being ignored (like strong US ISM reports) and bad news being blown out of proportion (like in the Fed’s Beige Book) and many of the concerns around share markets – notably in relation to the Fed and trade – remain unresolved. So, share markets could yet go down further into early next year in what we have referred to as a “gummy bear” market, ie where markets come down 20% or so before rebounding like we saw in 2015-16. However, we remain of the view that a “grizzly bear” market – where shares fall 20% and a year later are down another 20% or so – because a US/global recession is unlikely soon. The two big concerns of the last week look overdone.

First, while the Huawei arrest adds to the risks and despite Trump’s exaggeration causing confusion, Trump and Xi do look to have made progress on trade in Buenos Aires. In fact, Trump remains positive, further tariff hikes are on hold, China has confirmed the 90-day timetable for negotiations, it has indicated it will push forward with negotiations and has reportedly restarted imports of certain products. It could still go off the rails, but progress was made and there is a strong incentive for both sides to make a deal to resolve the issue before it weakens their economies (which won’t be good for Trump’s 2020 re-election). Note the Fed’s Beige Book referring to capex plans being put on hold partly due to trade uncertainty.

Second, the sudden frenzy over a bit of the US yield curve is whacko. Prior to the past week I had never heard of anyone focussing on the gap between US 5 year and 2-year bond yields – which has now gone negative. Similar to the Fed’s own research our view remains that the yield curve to watch is the gap between the 10-year bond yield and the Fed Funds rate and its flattened but is still positive at 76 basis points. And another useful version of the yield curve (inspired by Fed research) in the form of the gap between 2-year bond yields and the Fed Funds rate is also a long way from negative. As can be seen prior to the last three US recessions both of these yield curves inverted – but there were several false signals and the gap between the initial inversion and recession can be long averaging around 15 months. So even if they both invert now recession may not occur until 2020 and yet historically share markets only precede recessions by around 3-6 months so it would be too far away for markets to anticipate. 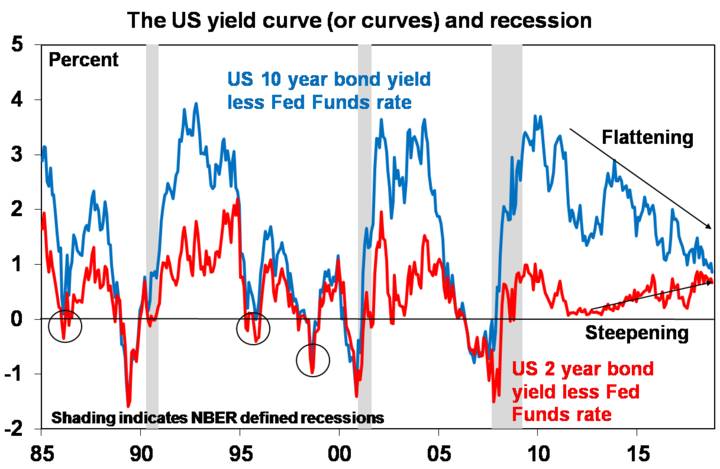 Of course, when investors want to sell they will and so markets can still head lower until there is a sentiment washout. But our assessment remains that this is overdone, and share markets aren’t going down into another grizzly bear market as the conditions aren’t in place for a US/global recession: we haven’t seen the sort of excess in discretionary spending, debt and inflation that normally precede recessions; monetary policy is not tight (and the Fed is likely to pause next year); and the slowdown in growth indicators looks like the short lived shallow slowdowns we saw into 2012 and 2016.

The Brexit comedy continued with the Government being defeated on several votes in parliament and PM May’s plan looks likely to be rejected on December 11.It could pass on a second vote if UK markets kick up a fuss and some groups abstain. But the alternatives are not flash: do some tweaks to the deal (but its doubtful the EU will agree); have a no deal Brexit (but this would likely plunge the UK in recession); cancel Brexit (but this would cause a huge fuss in the absence of another referendum and that would take longer than March to organise). The key for investors though is that while its a critical issue for the UK and UK assets, apart from adding to the noise Brexit is really just a second order issue for global markets.

Despite investors’ fears of a collapse in US growth, US data releases over the last week were actually strong. Yes, the Fed’s Beige book referred to some waning of optimism in some districts as contacts cited tariffs, rates and the tight labour market and construction spending fell. However, the ISM business conditions PMIs were very strong and actually increased in November and jobs data was strong.

China’s Caixin PMI’s surprisingly rose in November painting a more upbeat picture than the official PMIs. (Don’t know what the China data sceptics made of that one!)

Australian economic data was weak, and we now see the RBA cutting interest rates in the year ahead. September quarter GDP came in at just 0.3%qoq driven by very weak growth in consumer spending which saw annual growth fall back to just 2.8% which is well below the RBA’s expectation for growth around 3.5%, building approvals continue to trend down, retail sales rose modestly but the previous month was revised down, momentum in job ads is continuing to slow pointing to slower employment growth ahead, the trade surplus fell slump in home prices accelerated in November led by Sydney and Melbourne. And to cap it off the Melbourne Institute’s Inflation Gauge showed even slower inflation in November.

Growth is nowhere near as strong as the RBA is expecting and its likely to revise down its forecasts. Yes, public spending is strong, business investment is looking healthier and export earnings are doing well but the housing construction cycle is turning down and falling house prices will weigh on consumer spending. As such growth is likely to be constrained around 2.5-3% over the year ahead. Given the combination of falling house prices, tight credit conditions and constrained growth which will keep wages growth weak and inflation below target we see the next move being a rate cut. However, it will take a while to change the RBA’s thinking, so we don’t see rates being cut until second half next year but won’t rule out an earlier move if things are weaker earlier than we are expecting. By end 2019 the cash rate is likely to have fallen to 1%.

Sure the RBA is repeating the mantra that the next move in rates is more likely up than down, but just not yet (with the latest being Deputy Governor Debelle’s speech this week), but RBA commentary won’t always tell us what it might soon do (remember the February 2015 rate cut!) and the RBA has recently indicated that it is getting a bit more focussed on the risks around credit and Dep Gov Debelle has pointed that the RBA has more to go to the bottom of the easing barrel (ie 150 basis points on rates and quantitative easing if needed).

In the US, the focus will be back to inflation with the CPI data due Wednesday expected to be flat in November thanks to the oil price plunge and annual inflation falling back to 2.2% from 2.5%. Core inflation is expected to remain around 2.1%yoy. In other data expect to see strong job openings (Monday), continued high small business optimism (Tuesday) and retail sales and industrial production (Friday) to remain strong. US business conditions PMIs for December (also due Friday) are likely to remain solid at around 55.

The European Central Bank meets Thursday is expected to confirm that it will end quantitative easing this month, but it’s likely to commit to re investing maturing bonds for an extended period, indicate that it will provide more cheap funding for banks if needed and reiterate that a rate hike is a long way away. December business conditions PMIs (Friday) will likely show further slippage but still be at okay levels.

In Japan, the Tankan business survey (Friday) is likely to show some slippage in conditions.

Chinese economic data for November due to be released on Friday is expected to show growth in industrial production remaining around 5.9%yoy but a pick up in investment to 5.9% and a pick up in retail sales to around 8.8%.

In Australia, expect to see another fall in housing finance (Monday) of around 1%, ABS data on Tuesday to show a 1.7% fall in house prices for the September quarter consistent with private sector surveys and soft readings for business and consumer confidence (Tuesday and Wednesday).

Low yields are likely to drive low returns from bonds, with Australian bonds outperforming global bonds as the RBA holds and the Fed continues to hike (albeit at a slower rate next year).

National capital city residential property prices are expected to slow further with Sydney and Melbourne property prices likely to fall another 15% or so, but Perth and Darwin property prices at or close to bottoming, and Hobart, Adelaide, Canberra and Brisbane seeing moderate gains.

Beyond any further near-term bounce as the Fed moves towards a pause on rate hikes next year, the $A likely still has more downside into the $US0.60s as the gap between the RBA’s cash rate and the US Fed Funds rate will likely push further into negative territory as the RBA moves to cut rates. Being short the $A remains a good hedge against things going wrong globally.