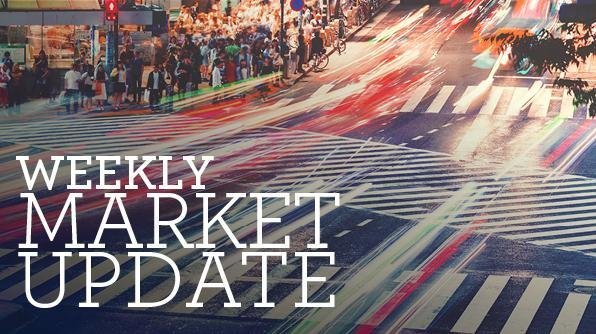 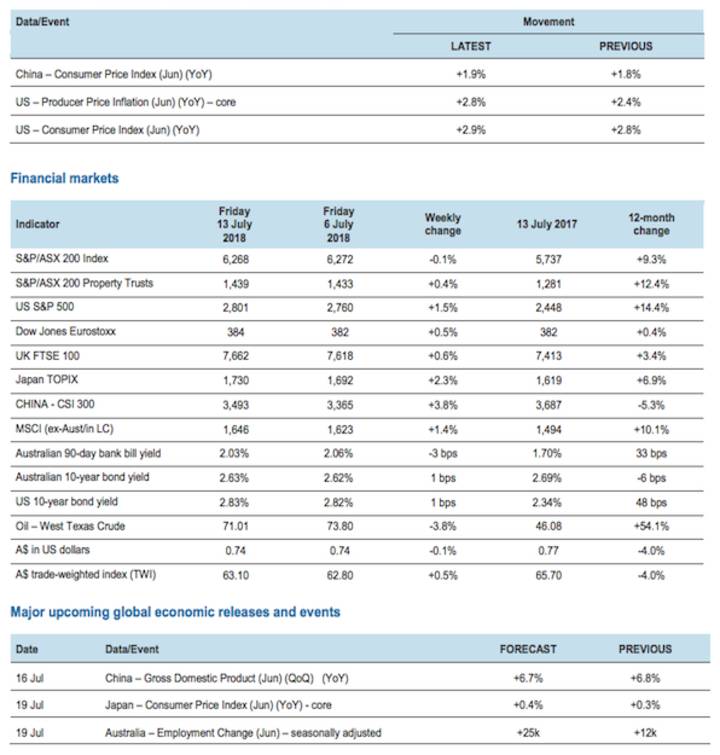 There was plenty of volatility this week as equities initially got hit following more detail from the US around additional tariffs on Chinese imports. The announcement actually contained nothing new, as Trump said in late June that the US would look to impose an additional 10% tariff on $200 billion of Chinese imports if China was to retaliate against US trade tariffs (which China did last week). After investors looked through the noise and decided that fundamentally, nothing had changed, stocks had a good rebound. There were also encouraging comments from China’s Vice Minister of Commerce calling for more talks with the US, with the White House indicating it was open to this. US equities were 1.5% higher over the week, Japanese shares surged by +3.7% (thanks to a weaker yen), China also rebounded significantly from recent lows, up by +3.8%, Eurozone equities +0.2% while Australian stocks fell by 0.1%. The Australian share market has been surging over recent weeks, so some pullback was anticipated. The US dollar rose a little further this week, but is probably close to reaching a peak for now. US 10 year treasury yields were slightly lower this week and commodities generally weakened against the higher US dollar.

The latest on the US-China trade war: The additional $200 billion of Chinese goods imports that may be subject to a 10% tariff are mainly final-use consumer products (which is bad news for consumer inflation), in contrast to the first $34 billion of tariffs which were applied on specific machinery, some electronics and optimal/medical equipment. This week’s announcement does not mean that tariffs will start immediately on more than $200 billion of Chinese goods import. There will be a “consultation process” (as there was on initial tariffs announced in March) that will continue until 30 August which means that these tariffs may not be implemented until late September/early October (right before the mid-term elections). So, there is still time for the US and China to negotiate a solution. A negotiated solution is still the most likely outcome in our view (with a probability of 50%), but trade talks will be messy for the next few months and the next round of tariffs on $16 billion of Chinese imports is expected to go ahead. We also think there is a reasonable chance that the $200 billion of additional tariffs on Chinese imports under consultation now will start up (with a probability of 35%) but if this occurred we think it would be quickly followed by a negotiated solution. We see low risk of a full-blown trade war (with a probability of 15%). What will be the economic impact? So far, the value of total global tariffs imposed (solar panels and washing machines, steel and aluminium, $34 billion n of Chinese imports) amounts to a small 3-4% of total US imports. But, including the additional $16 billion of Chinese imports (which are likely to be implemented), the $200 billion  investigation which started this week, another potential $200 billion (that Trump said could be done if China retaliates further) plus potential tariffs on car & car parts imports, this is worth around 30% of US imports and this would have a larger negative economic impact via hitting growth and lifting inflation. But we are not there yet. And so far, there has been no sign that trade worries have hit the hard data, but consumer confidence is starting to be affected. How will China retaliate? China imports much less from the US (around $130 billion annually vs the US at $520 billion), so it’s proportional retaliation to US tariffs will move to other qualitative areas like increasing regulation of US companies operating in China, lifting inspections of US goods imports at customs. Or China could impose higher tariffs on US goods imports. China could also sell its holdings of US Treasury bonds or weaken its currency. But, given recent market unease around future Chinese/emerging market growth and a big drop in Chinese equities, this is not likely in the near-term. The bottom line around trade is that any potential negotiations around trade will be long and drawn out, so investors need to be aware that trade tensions are here to stay for now, particularly before the mid-term elections in November. Recent polling for Trump has been more positive lately, which should be watched if consumer inflation rises quickly from tariffs.

Brexit issues continued this week with three cabinet members resigning, including Foreign Secretary Boris Johnson and Brexit Secretary David Davis who were two prominent figures for the Leave campaign. These resignations followed PM Theresa May’s latest proposal around the future EU-UK trade relationship, which looks like a free market with the UK in goods (but not in services and people). The risk of a softer Brexit is more likely for now. May’s proposal still needs to be approved by the European Union, which may not be willing to accept free movement of goods, without the inclusion of services/people.

Australian Prudential Regulation Authority (APRA) Chairman Wayne Byres spoke this week about the broad sweep of macro-prudential measures imposedby the regulator over recent years. Byres noted that macro-prudential tools introduced (to slow investor loan growth and reduce high risk lending across investors and owner-occupiers) have improved lending practices, but that the heavy lifting is “largely done” now. So don’t expect any more significant macro-prudential settings to be imposed. Further tightening could be done at the margin, such as more focus on borrower’s expenses and monitoring total debt (not just housing) commitments by households. Byres also noted that recent APRA stress testing around bank’s capital requirements saw major lenders maintain their capital ratios above minimum requirements. It was also mentioned that APRA views the changes in lending practices to not have had an obvious impact on housing credit flows overall as investor credit has slowed, but owner-occupied credit is still running at a solid pace (see chart below). In our view, the APRA measures have had a larger impact on slowing credit growth in the economy than APRA is indicating, particularly in the absence of higher interest rates. Credit growth should slow further, because lending standards have been tightened again, along with a natural slowing in demand for new housing loans.

US data was generally good. Inflationary pressures are continuing to lift – core consumer prices were 2.3% higher over the year to June and producer price inflation rose by 2.8%. Labour market indicators remain strong with the latest employment quits rate increasing to 2.4% – its strongest level since 2001 which is a positive sign that there is plenty of demand for workers. It is also a good sign for wages growth with wages running higher for workers who change jobs (rather than those who stay in the same job). NFIB small business confidence was a little weaker in June but is above recent averages. But, consumer confidence was softer in July, with consumers citing potential negative impacts from trade issues.

Eurozone data was mixed with the latest ZEW investor confidence down in July and expectations for the Euro area falling to its lowest level since 2012. But industrial production growth was strong over May, thanks to a lift in Germany.

The Bank of Canada raised interest rates by 0.25% to 1.5% – which was expected, citing key inflation measures of running around 2% – consistent with the economy close to capacity.

Chinese producer price inflation lifted to 4.7% in June thanks to stronger commodity prices, industrial-winter production cutbacks and anti-pollution efforts. Inflation also lifted to 1.9% from higher food prices. The trade surplus rose in June, but import growth was weaker than expected.

Australian business confidence was down marginally in June while consumer confidence rose in July to its highest level since late 2013. Consumers appeared to be bolstered by the start of the Federal Government’s low-middle income tax “cuts”. The positivity in consumer confidence recently is encouraging – but is unlikely to lift retail spending much given the pressures of low wages growth and declining home prices.

Housing finance fell by 0.5% in May, driven by a drop in investor loans. Owner-occupied lending is still holding up.

US data includes June retail sales, industrial production, housing indicators such as starts, the Fed’s Beige Book and Fed Chair Powell’s semi-annual monetary policy testimony. US second quarter corporate earnings season gets underway and consensus expectations are high – with earnings growth expected to lift by 21% year-on-year – thanks to the corporate tax changes and the strong economy. Earnings growth estimates are around their peak and are expected to weaken in 2019 and 2020.

Chinese second quarter GDP is expected to increase by 6.7% over the year to the June quarter, a little weaker than in recent quarters but still solid. June industrial production and retail sales are also released.

In Japan, core CPI for June should show annual growth around 0.4% – which is low, but far from deflation.

While we continue to see share markets as being higher by year end as global growth remains solid helping drive good earnings growth and monetary policy remains easy, we are likely to see more volatility and weakness between now and then as the US driven trade skirmish gets worse before it gets better and as worries remain around the Fed, Trump in the run up to the US mid-term elections, China, emerging markets and property prices in Australia. The Australian S&P/ASX 200 index is on track for our year-end target of 6300.

The A$ likely has more downside to around US$0.70 as the gap between the RBA’s cash rate and the US Fed Funds rate pushes further into negative territory as the US economy booms relative to Australia. Solid commodity prices should provide a floor for the A$ though in the high US$0.60s.