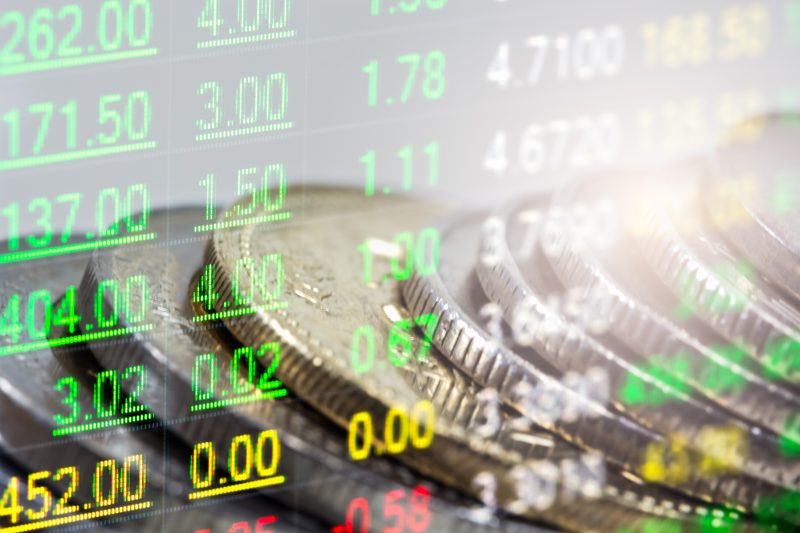 Investing can be frustrating and depressing at times, particularly if you don’t understand how markets work and don’t have the right mindset. The good news is that the basics of investing are timeless, and some have a knack of encapsulating these in a sentence or two that is both insightful and easy to understand. In recent years I’ve written insights highlighting investment quotes that I find particularly useful. Here are some more.

Having a goal and a plan

“Financial peace isn’t the acquisition of stuff. It’s learning to live on less than you make, so you can give money back and have money to invest. You can’t win until you do this.” ~ Dave Ramsey

The only way to be able to build wealth is to save and invest and you can only do this if you spend less than you earn. That is, you have to start with a savings plan.

“Put time on your side. Start saving early and save regularly. Live modestly and don’t touch the money that’s been set aside” ~ Burton G Malkiel

In investing time is your friend and the earlier you start the better. This is the best way to take advantage of the magic of compound interest. The next chart – my favourite – shows the value of $1 invested in various Australian asset classes since 1900 allowing for the reinvestment of any income along the way. That $1 would have grown to just $234 if invested in cash, $866 in bonds but a whopping $529,293 if invested in shares. 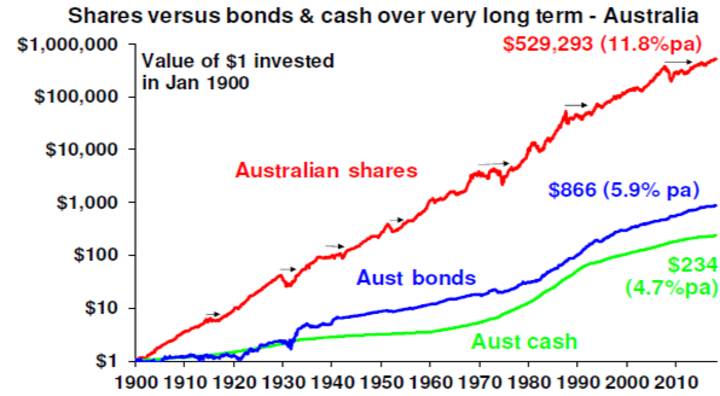 While the average share return since 1900 is only double that in bonds, the huge gap in the end result between the two owes to the magic of compounding returns on top of returns. A growth asset like property is similar to shares over long periods in this regard. Short-term share returns bounce all over the place and they can go through lengthy bear markets (shown with arrows on the chart). But the longer the time period you allow to build your savings the easier it is to look through short-term market fluctuations and the greater the time the compounding of higher returns from growth assets has to build on itself.

“If you fail to plan, you plan to fail.” ~ Often attributed to Benjamin Franklin

Having a clear understanding of your investment goals – like saving for a home or retirement or generating income to live on – and a plan to get there is critical. If you don’t have a clear plan you will be subject to all sort of distractions which can blow you a long way from where you want to get with your investments.

Bear markets are invariably preceded by excess in the economy – over investment, high levels of debt growth, high levels of inflation and tight monetary conditions – and excess in the share market in the form of overvaluation and investor euphoria. It’s this excess which drives exhaustion and hence the end of a bull market, not its age.

“The stock market has predicted 9 of the past 5 recessions.” ~ Paul Samuelson

In the short term the share market moves all over the place with each significant plunge eliciting calls for an impending recession and a deep bear market. But most of the time it’s just noise providing an opportunity for investors before a rebound. For example, over the past 50 years in the US there has been 21 episodes of 10% or greater share market falls, but only seven saw recessions and bear markets.

“The biggest investment risk is not the volatility of prices, but whether you will suffer a permanent loss of capital. Not only is the mere drop in stock prices not risk, but it is an opportunity.” ~ Li Lu

“The day after the market crashed on 19th October 1987, people began to worry that the market was going to crash” ~ Peter Lynch

This is perhaps a bit flippant, but it goes to the heart of crowd psychology and why it’s best to go against the crowd at extremes. When times are good the crowd is relaxed, happy and fully invested. So everyone who wants to buy has. This leaves the market vulnerable to bad news because there is no one left to buy should prices drop. Similarly, after a sharp fall the crowd gets negative, sells their investments to the point that everyone who wants to sell has and so the market sets up for a rally when some good or less bad news comes along. So the point of maximum risk is when most are euphoric, and the point of maximum opportunity is when most are pessimistic.

“It is easier being sceptical, than being right.” ~ Benjamin Disraeli

The human brain evolved in a way that it leaves us hardwired to be on the lookout for risks. So a financial loss is felt more negatively than the beneficial impact of the same sized gain. Consequently, it seems easier to be sceptical and pessimistic. As a result, bad news sells and there seems to be a never-ending stream of warnings regarding the next disaster. But when it comes to investing, succumbing too much to scepticism and pessimism doesn’t pay. Historically, since 1900 shares have had positive returns seven years out of 10 in the US and eight years out of 10 in Australia.

This is what stops many investing after big falls – all they see are the reasons the market fell. Not the opportunity it provides.

“Without a saving faith in the future, no one would ever invest at all. To be an investor, you must be a believer in a better tomorrow.” ~ Jason Zweig

If you don’t believe your term deposit is safe, that borrowers will pay back their debts, that companies will see good profits and that properties will earn rents then there is no point in investing.

“An investment said to have an 80% chance of success sounds far more attractive than one with a 20% chance of failure. The mind can’t easily recognise that they are the same.” ~ Daniel Kahneman

Beware of tricks that your mind plays on you when investing. Numerous studies show that people suffer from lapses of logic – eg, assuming the current state of the world will continue, being overly confident and assessing the risk of certain events by how they are presented. The key for investors is to be aware of these biases and try to correct them.

The information revolution has given us access to an abundance of information and opinion regarding investment markets. The danger is that it adds to the uncertainty around investing resulting in excessive caution, a short-term focus, a tendency to overreact to news and to focus on things that are of little relevance. The key is to recognise that much of the noise and opinion around investing is ill informed and of little value.

“The ability to focus is a competitive advantage in the world today.” ~ Harvard Business Review

The key in the face of this information and opinion onslaught is to turn down the noise and focus.

“If you can keep your head when all about you are losing theirs…If you can wait and not be tired by waiting… If you can trust yourself when all men doubt you…Yours is the Earth and everything that’s in it.” ~ Rudyard Kipling, If, as quoted by Warren Buffett

“I believe that economists put decimal points in their forecasts to show that they have a sense of humour.” ~ William Gillmore Simms

The dismal track record of precise forecasts regarding things like economic growth, share prices and currencies indicates that relying on them when investing can be dangerous. There is often a big difference between getting some forecasts right and making money. Good experts will help illuminate the way and put things in context, so you don’t jump at shadows but don’t over rely on expert forecasts – particularly the grandiose ones.

“I am going to reveal the grand secret to getting rich by investing. It’s a simple formula that has worked for Warren Buffett, Carl Icahn and the greatest investment gurus over the years. Ready? Buy low, sell high.” ~ Larry Kudlow

Yep it’s that simple. Or it should be, but many do the exact opposite and buy high after a lengthy period of strong returns convinces people it’s a great investment (but the risks point down), and then sell low after fall in the price of an asset leads people to believe that it’s a bad investment (but that’s when the risks point up). The key to is do the opposite – buy low, sell high and it’s very helpful to have an investment process to do that.

This helps bring the essentials of investing together. They stand to reason: the less you pay for an investment the greater the return potential; just having one or two shares leaves you very exposed should the news turn bad regarding those shares but if you diversify across a range of shares you can reduce the risk of a fall in your overall portfolio; and doing the opposite to the crowd means you can avoid the points of maximum risk in markets when most are fully invested and take advantage of periods of maximum opportunity when most have sold.

“Success consists of going from failure to failure without loss of enthusiasm.” ~ Winston Churchill

As with all things we need to recognise that to learn we need to make mistakes and to be persistent.

This applies to life in general, but it also applies to investing – don’t jump around all over the place and keep it simple.

“A man should make all he can, and give all he can.” ~ Nelson Rockefeller

It’s not financially possible for everyone but consider giving a bit away for good causes if you can – and not just for the tax deduction as you will feel good and it will bring good karma.

“The trouble with doing nothing is that you don’t know when you have finished.” ~ Cafe blackboard in Byron Bay