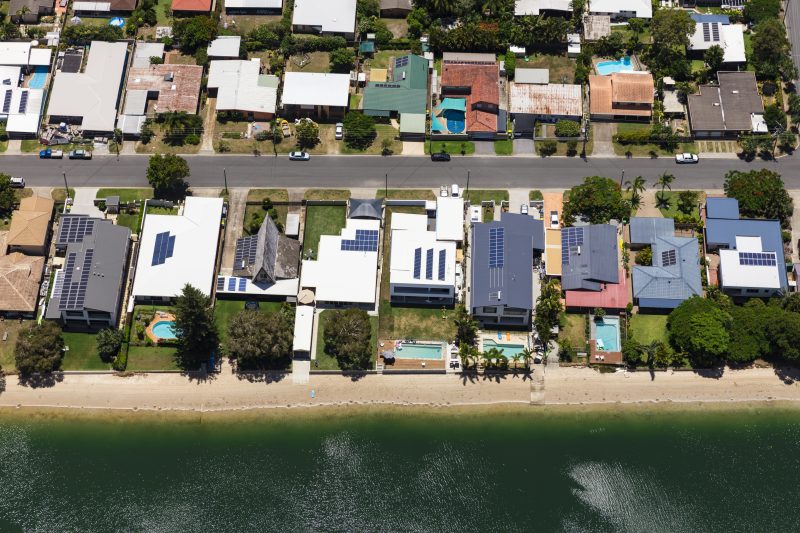 Will Australian interest rates ever go up?

While the global economy is seeing its fastest growth in years and the US Federal Reserve has increased rates five times since December 2015 and is on track for more hikes this year, the Reserve Bank of Australia (RBA) has now left interest rates on hold for a record 21 months in a row. The Australian economy is in a very different position to the US. While the RBA continues to expect that the next move in rates is most likely to be up, and we tend to agree, we now don’t see a hike until sometime in 2020. And the next move being a cut cannot be ruled out. This note looks at the reasons and what it means for mortgage rates, the $A and investors.

Four reasons why rates will be on hold into 2020

We have been looking for a rate hike in early 2019, but have now pushed that out to 2020 for the following reasons: 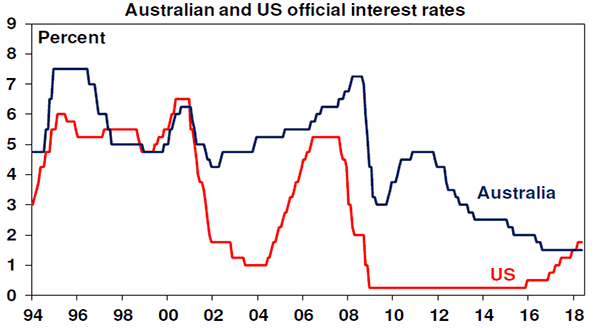 There is good reason for the RBA to lag the Fed. Labour market underutilisation (see next chart) at 8% in the US is about as low as it ever gets whereas in Australia its around 14%. If wages growth is only just starting to pick up in the US despite a much tighter labour market it’s no surprise that it will take much longer in Australia. 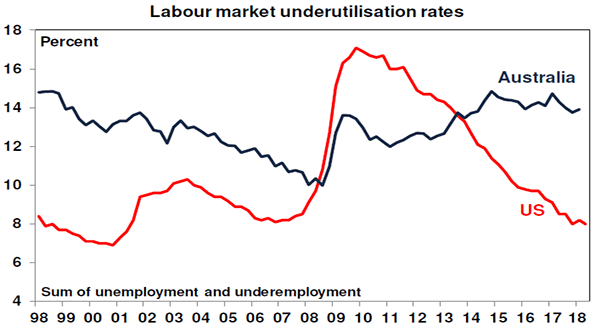 Continuing weak wages growth along with excess capacity and high levels of competition in goods markets will keep underlying inflation around the low end of the RBA’s 2-3% target for a lengthy period yet. 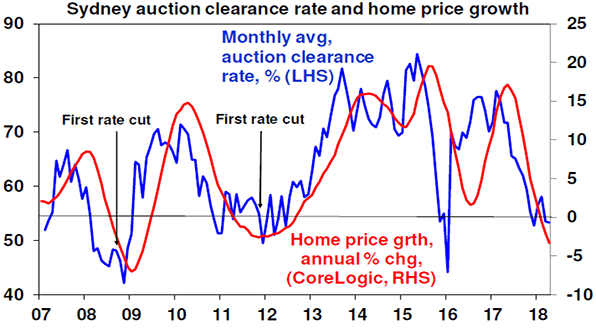 Capital cities other than Sydney and Melbourne face a much better outlook as they did not see the same boom in recent years. However, we see prices in Sydney and Melbourne falling another 5% this year, another 5% next year and with further slight falls in 2020. We are running around levels for price growth and auction clearance rates that in the past have been associated with the start of interest rate cutting cycles (in September 2008 and November 2011 – see the previous chart), not rate hikes! The risks of a sharper fall in prices if investors lose faith, homeowners decide to reduce high debt levels and if the shift from interest only to principle and interest for many borrowers over the next few years creates problems needs to be allowed for. Raising rates when prices are falling will accentuate these risks.

As a result of these considerations, we have pushed our timing regarding the start of interest rate increases into 2020. Of course, the risk here is that by 2020 the US economy may be weakening making it hard for the RBA to then start considering rate hikes. And of course, if the declines in home prices turn out to be deeper the next move could end up being a cut. 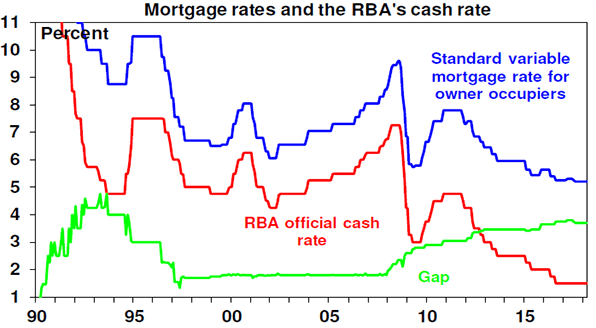 There are two main pressures at present. The first is a rise in money market funding costs in the US and Australia of around 0.3 to 0.4%. Given that only 10-15% of bank funding comes from this source its unlikely to have much impact. And the banks are unlikely to pass on the extra costs to owner occupiers on traditional loans given the Royal Commission, but banks could raise rates for investors and interest only borrowers. Higher US bond yields could also place some pressure on bank funding costs but again this is likely to be modest, and probably unlikely to result in higher rates for owner occupiers on traditional loans. The main thing for traditional borrowers to watch is the cash rate. If we are right, such borrowers will see pretty stable mortgage rates out to 2020.

What about the $A?

With the RBA likely on hold and the Fed set to keep hiking the interest rate gap between Australia and the US will go further into negative territory. Historically, this means a fall in the value of the Australian dollar. The $A appears to be starting to break below the rising trend channel that’s been in place since 2015 and we see more downside to around $US0.70. A fall to below $US0.50 as we saw in 2001 is unlikely as commodity prices are likely to remain much stronger than they were then. 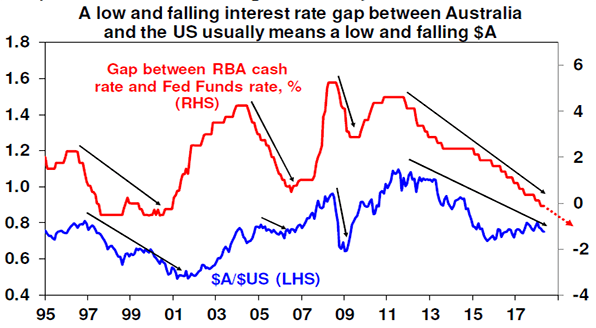 First, bank deposits are likely to continue providing poor returns for investors for a while yet.

Second, as a result assets that are well diversified and provide decent income flow remain worthy of consideration. This includes unlisted commercial property and infrastructure along with Australian shares which continue to offer much higher income yields compared to bank deposits.

Third, Australian bonds are likely to outperform global bonds which are dominated by the US as US bond yields rise (on the back of Fed tightening) relative to Australian yields (which will be constrained by on hold RBA cash rates).
Finally, with the $A likely to fall further there is reason to keep a decent exposure to global assets on an unhedged basis.

Original Source: Produced by AMP Capital Ltd and published on 2 May 2018.  Original article.