Federal Budget – what could it hold?

Speculating about the likely look and feel of the 2016 Federal budget is fast becoming a national pastime. That’s largely because significant tax reforms are on the cards, with changes that could impact key wealth assets like property and superannuation.

Any reforms are expected to help to plug the revenue gap created by the winding down of the resource boom, which has seen corporate profits (and consequently tax revenue) decline.

The Turnbull government has all but ruled out an increase in the Goods and Services Tax (GST), so its options have dwindled. That said, the national Budget deficit looms large as an overarching issue, so it is no secret that tax reform will be a central platform of the 2016 Budget.

We look at where key changes are likely to occur.

All signs are pointing to a crackdown on superannuation tax breaks. That’s not surprising. The nation’s $2 trillion pool of lightly taxed super savings must be viewed by Canberra as a honeypot too good to resist. Ideas that appear to have been tossed around by Canberra include a tightening of the limits on how much we can tip into super, and the possible introduction of a tax on super earnings for those in the retirement phase.

The details may be uncertain at this stage, but the likelihood is that it could be more difficult to move large sums of money into super in the future.

Similarly, some sort of tightening of negative gearing is seen as a distinct possibility though cuts to the 50 per cent capital gains tax (CGT) discount available to long term investors is a more likely prospect.

While we may have until 1 July 2016, or later, to prepare for key changes, the risk is that some new rules could be effective immediately from Budget night.

It is worth stressing it doesn’t make sense to change your investment strategy based on pre-budget speculation. But it certainly is worth speaking to us about possible steps you could take now to maximise the benefits you currently enjoy under the present system.

If you’re still in the workforce now may be the time to be on the front foot in terms of growing a nest egg. The Budget may feature changes that make it harder to reach personal retirement goals. In particular it’s tipped the government may tighten the rules for transition to retirement pensions, potentially by restricting the number of hours each week you need to work to be able to access this type of pension.

In addition, the possibility of changes to the CGT discount could make it worth bringing forward plans to sell property or shares. That’s not to say a fire sale of assets is necessary but it is important to review your situation with us. The ‘danger area’ may be if you are thinking about selling an asset in the near future with a view to investing a large chunk of the profits into super.

If that sounds like you, be sure to make a time for a chat with us. We can help you to put strategies in place that let you plan for the longer term regardless of unexpected speed bumps along the way.

If you’re in the drawdown phase

It’s good for news for retirees that an increase to the GST is unlikely however cuts to personal tax are also unlikely.

On the flipside, in a bid to rein in the Budget deficit, spending cuts are a very real possibility. Just what they will be is unclear but retirees often tend to feel the pinch of cuts more than other segments of the population.

The prospect of changes to the CGT discount could make it worth bringing forward plans to sell property or shares. Again, an asset fire sale isn’t the solution, but taking some time to review your options with us would be a valuable step. The ‘danger area’ may be if you are thinking about selling an asset housed within a self-managed super fund – any changes to the tax rates on super savings during the drawdown phase could impact your long term nest egg.

While changes to negative gearing may not directly impact the majority of retirees, anyone considering acting as guarantor for an adult child’s investment loan should proceed with caution. It could heighten the risk of becoming responsible for the loan because if tax changes make the arrangement unworkable for the primary loan holder, the buck ultimately stops with guarantors.

Whatever the Federal Budget holds we can assist you to be prepared for any changes. 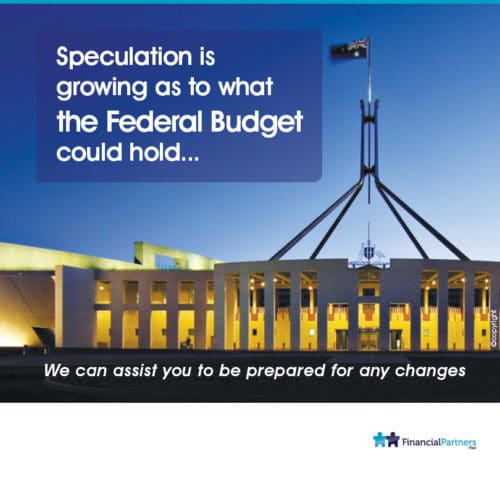