Share markets rose over the last week helped by optimism regarding a US/China trade deal and mostly okay economic data with US shares reaching a new record high. Australian shares also broke out to a new record high helped by the positive global lead with strong gains in telcos, health, energy and IT stocks offsetting more constrained increases in financials with the issues around Westpac still impacting. Bond yields were little changed globally but they fell in Australia on the back of weak data and prospects for more monetary easing. While the oil price was flat copper and iron ore prices rose. The Australian dollar fell slightly on prospect for more monetary easing even though the US dollar was little changed.

The past week saw some more positives headlines on the US/China trade talks. China indicated a strengthening in intellectual property protection and that the latest trade talks were constructive with agreement to stay in contact on the remaining points of a deal and President Trump said the talks were in the “final throes”. Trump’s signing into law of a bill supportive of Hong Kong demonstrators led to renewed uncertainty though. This need not necessarily de-rail the trade talks but may mean that the US might have to roll back more tariffs as part of the Phase 1 deal. Our assessment remains that the pressure on both sides to ease trade tensions – even if it’s just for 6-12 months – is now far more intense than has been the case over the last 18 months. The key to watch in the near term is the fate of the scheduled December 15 tariff hike.

The RBA’s roadmap for what it may do beyond cutting interest rates – QE yes but not on the radar (yet), negative rates still “extraordinarily unlikely”. With the official cash rate getting closer to zero it makes sense for the RBA to be thinking about what else it can do and it has clearly given a lot of thought to it with Governor Lowe providing a pretty comprehensive and transparent review of the options. The basic message from the RBA is that if further easing is needed it will first take the cash rate down to 0.25%. If additional stimulus is needed it would then consider quantitative easing (QE) but only if the economy is “moving away from, rather than towards, our goals for both full employment and inflation.” In doing so the RBA would buy only government bonds in the secondary market which rules out the direct financing of fiscal stimulus (ie helicopter money) and would not buy private sector assets. With financial markets including the banks’ access to funding operating normally it also ruled out liquidity measures. This effectively rules out for now any moves to buy bank bills, mortgage backed securities or provide cheap funding for banks to increase the pass through of rate cuts to borrowers. In addition, negative rates continue to be seen as “extraordinarily unlikely” (and righty so because its not clear that they work). Oddly enough Governor Lowe didn’t mention the scenario of neither moving away from or getting closer to the RBA’s goals of full employment and at target inflation. Given we have spent the last five years or so stuck in that scenario I suspect, which I think looks likely.

Which brings us to where to from here? Given the recent run of weak data on jobs, retail sales, car sales, housing construction and business investment, the RBA’s own forecasts for barely any progress towards reaching its goals over the next two years and that the RBA sees rate cuts as still working (I agree), it should be cutting rates again on Tuesday. Particularly so given that the next Board meeting is not till February. A speech by RBA Deputy Governor Debelle also highlights the problem the RBA has with wages growth around “2 point something” becoming the norm but well below the level necessary for sustained 2-3% inflation. In other words inflation expectations may be becoming de-anchored from the inflation target. However, the Governor’s comments suggest little urgency and a preference to “wait and assess” given the “long and variable lags” of monetary policy. As a result we now expect the next 0.25% rate cut to come in February and with growth likely to remain weaker than the RBA expects we see a final cut to 0.25% in March. Beyond which QE is likely, but the RBA will likely delay it until it sees whether it gets any substantial further fiscal easing in the May Budget.

US economic data was generally pretty good. Pending home sales fell in October, but September quarter GDP growth was revised up slightly to 2.1%, October data showed solid gains in durable goods orders and personal spending, the trade deficit fell, consumer confidence slipped a bit in November but remains strong, home prices are rising, jobless claims fell pointing to continuing labour market strength and the Fed’s Beige Book of anecdotal evidence was a bit more upbeat on the economy. At the same time core consumption deflator inflation fell to 1.6% year on year in October. So it looks like Goldilocks (ie not too hot, not too cold) remains alive and well. All of which will probably leave the Fed on hold at its December meeting.

The Japanese labour market remained strong in October, but industrial production fell back sharply although its likely been distorted by the October sales tax hike.

Australian business investment continuing to disappoint. September quarter construction data showed a continuing fall in dwelling construction consistent with the fall in building approvals. But the big disappointment is the ongoing weakness in business investment. Non-residential building rose in the September quarter but plant and equipment fell yet again. More significantly business investment plans for the current financial year imply a downgrade to the outlook with plans up only 2.5% on those made a year ago for 2018-19, which implies close to zero real growth. Mining investment looks on track for a strong rise but non-mining investment looks likely to fall slightly. 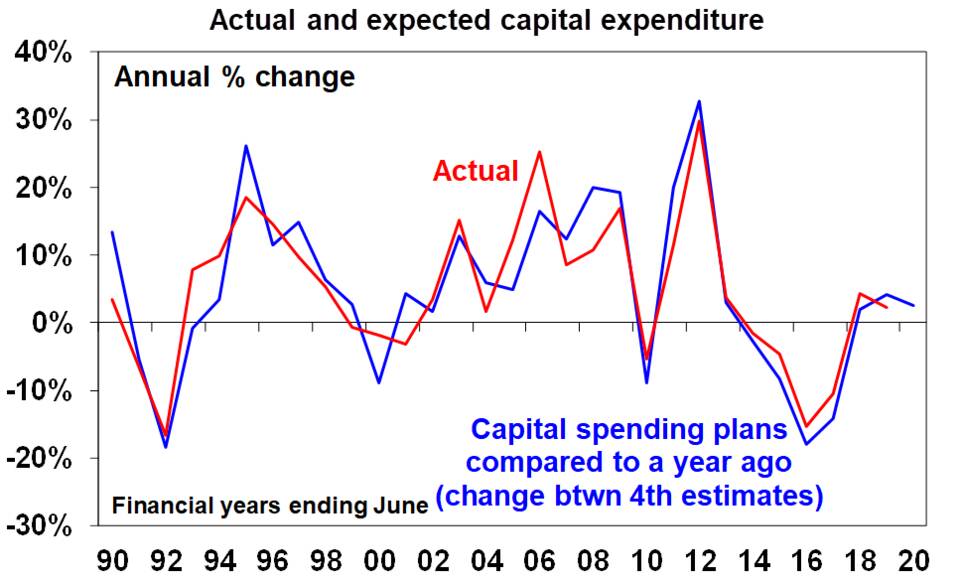 Meanwhile private credit growth slowed further in October to its slowest rates since 2010 of 2.5%yoy. Annual growth in housing credit slowed to a record low of 3%yoy, but monthly data looks to be stabilising suggesting that a pick-up in new loans may be starting to offset the rapid pay down of existing housing debt. But with total housing credit growth remaining soft at 3% year on year it’s far from being a concern for the RBA from a financial stability perspective, so the housing market upswing is not yet a constrain on further RBA monetary easing. 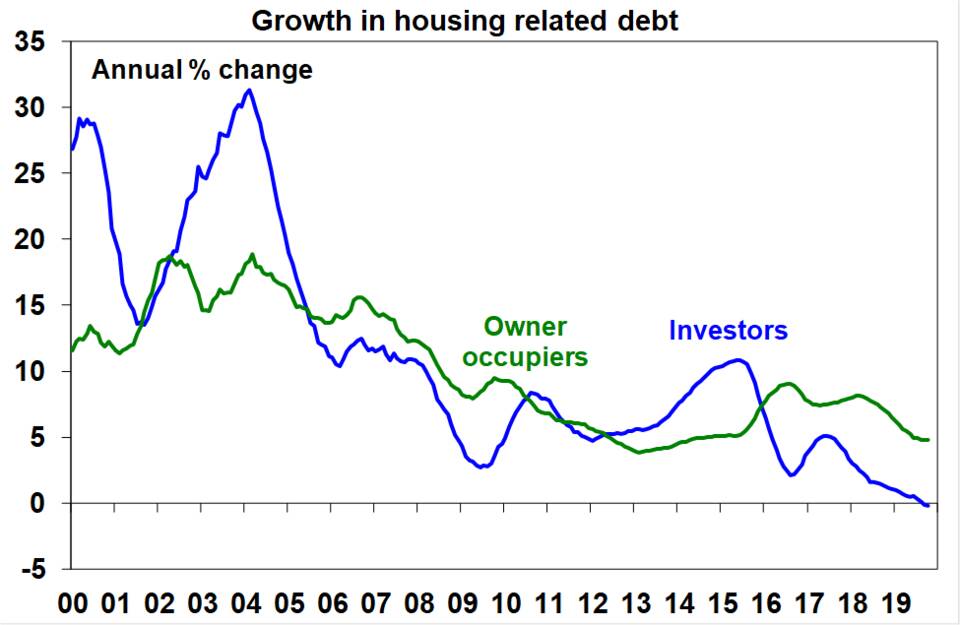 In the US, payrolls for November due Friday are expected to bounce back with a 190,000 gain after the soft GM strike affected October result but unemployment is likely to remain at 3.6% with wages growth edging up to 3.1% year on year. In other data, expect a slight rise in the manufacturing conditions PMI (Monday), a slight fall in the non-manufacturing PMI (Wednesday) and a decline in the trade deficit (Thursday).

China’s Caixin manufacturing conditions PMI (Monday) is expected to fall slightly but the services PMI is likely to rise slightly.

In Australia, the RBA should be cutting rates again on Tuesday given that it remains far away from its goals for full employment and inflation and is likely to remain so for the next two years, but looks likely to remain in “wait and assess” mode and leave rates on hold. It is a close call though. See the first section of this report for more details.

On the data front in Australia, expect September quarter GDP growth of 0.6% quarter on quarter or 1.7% year on year, but with net exports, public spending and inventories being the main drivers offsetting continued softness in consumer spending, housing investment and business investment. Not the best growth mix! In terms of other data expect another strong rise in November average home prices of around 1.5% as the unleashing of pent up demand post the election and rate cuts continues and a fall back in building approvals (Monday), another current account surplus and continued strength in public spending (Tuesday) and a fall back in the trade surplus and 0.2% rise in October retail sales (Thursday).