Share markets fell over the last week on the back geopolitical concerns with Democrats opening an impeachment inquiry into President Trump, ongoing trade war uncertainties and more Brexit mayhem at the same time that global business conditions PMIs remained soft. Australian shares were dragged lower by the poor global lead with telcos and resources stocks down sharply but with real estate, IT and consumer discretionary stocks helping to limit the decline. Reflecting the risk off tone bond yields fell, commodity prices fell with the oil price continuing to reverse some of its spike on the back of the attack on Saudi oil production and the Australian dollar slipped as the US dollar rose.

The US/China trade war saga continued to impact markets over the last week but at least face to face talks look set to resume in the US in the second week of October and the US and Japan have confirmed a new free trade deal.

The impeachment inquiry of President Trump adds to the risks around share markets (which would probably prefer to see Trump remain as President), but is unlikely to have a big impact. After resisting calls for impeachment for some time (because the evidence wasn’t strong enough in relation to the Russian interference issue) US House Speaker Nancy Pelosi finally relented in relation to Trump’s request over the phone to the Ukrainian President to investigate Joe Biden on the grounds that it’s a violation of the US constitution. The process is simple – if the House votes for impeachment it then goes to the Senate where a two thirds majority is necessary to remove the President from office. There are several reasons not to be too concerned.

The UK Supreme Court determination that PM Johnson’s suspension of parliament was unlawful adds an episode to the Brexit comedy but probably doesn’t change things much from the parliamentary intervention a few weeks ago: a no-deal Brexit is looking unlikely and new delay is looking certain.

RBA Governor Philip Lowe, wasn’t as dovish as maybe some had hoped but his “An Economic Update” speech left the door wide open for more rate cuts. Governor Lowe remains optimistic that the Australian economy has seen a “gentle turning point” but his comments around increasing downside risks to global growth, weaker than expected GDP growth, spare capacity in the labour market, a stalling in the pick up in wages growth, it being “not unreasonable” to expect further easing and that markets should be surprised if the RBA didn’t “act consistent with our mandate” are all very dovish. We remain of the view that the RBA will cut rates again on Tuesday and now see the low point being 0.25% in February next year – see the outlook section below. It’s also worth noting that the Prime Minister has indicated a willingness to look at budget stimulus at the mid year budget review (MYEFO) in December and in the May Budget. So, its not a case of either stimulus or surplus.

Australian petrol prices up more than the oil price. Since the attacks on Saudi oil production the world oil price has increased by around $US2 a barrel, which is nothing more than normal volatility in oil prices. Given the fall in the Australian dollar over the same period this translates to a rise of around 3 cents a litre and yet average petrol prices are up from 143 cents a litre to now 151 cents a litre. In some Sydney suburbs – the ones I drive through! – they have spiked to a record 171 cents per litre. Someone must be making a bit of extra profit here under cover of the attacks even though the impact on the world oil price has been trivial!

US data was mixed with a small rise in September business conditions PMIs, gains in home prices and continuing low jobless claims but a fall in consumer confidence. The latter remains high but a key risk would be if the fall in business confidence and capex plans over the last year translates into reduced employment and hence consumer spending.

Eurozone business conditions were weak in September with another leg down, but at least the German IFO business survey improved slightly and bank lending growth was okay.

Japanese business conditions PMIs also fell slightly in September although they are still up from levels seen through the first half.

It was a quiet week for Australian economic data but both skilled job vacancies and the ABS measure of economy wide job vacancies fell (led by NSW and Victoria) pointing to slower jobs growth ahead and a further rise in unemployment. What’s more ABS employment data by industry shows that all of the jobs growth in Australia over the last year has come from the public sector – which perhaps explains why jobs growth has been so strong relative to weak GDP growth. The CBA’s business conditions PMIs rose in September, but they tend to be a bit volatile and they are sill well down from 2017 highs.

Meanwhile, it’s worth noting that the pick-up in auction clearance rates that has occurred in Sydney and Melbourne this year is now being accompanied by higher listings and sales suggesting that it has legs. Key to watch for now will be whether clearance rates continue to hold up as the spring selling season heats up and whether housing finance commitments continue to rise. Our assessment remains that after a further bounce price gains will be constrained through next year due to still tighter lending standards, unit supply, slow growth and rising unemployment. 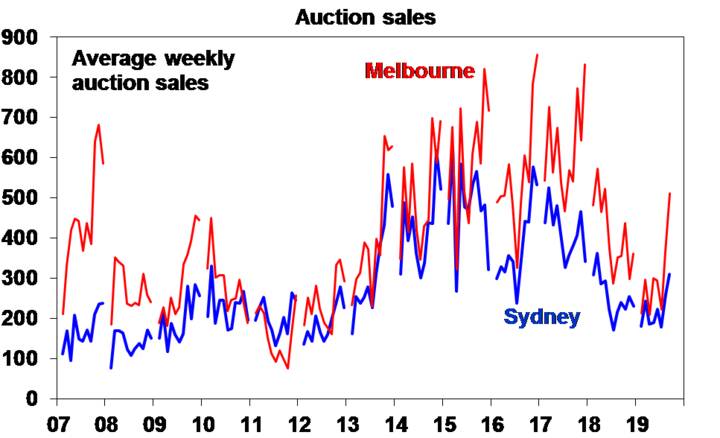 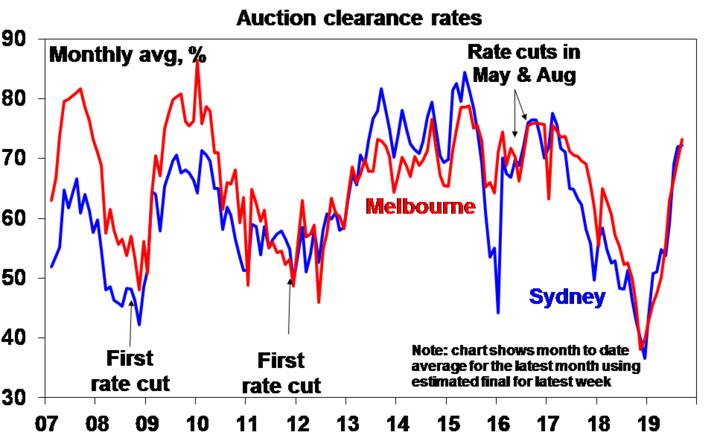 In the US, the key focus will likely be on September jobs data to be released Friday which is expected to show a 140,000 gain in payrolls, unemployment remaining low at 3.7% and wages growth remaining around 3.2% year on year. But before we get to that expect the September manufacturing conditions ISM (Tuesday) to rise slightly to 50.5 to be more in line with the Markit PMI but the non-manufacturing conditions ISM (Thursday) to fall slightly but to a still solid reading of 55. Trade data will also be released Friday.

In Australia, the RBA is expected to cut the cash rate to a new record low of 0.75% on Tuesday, making it the third rate cut this year. Economic growth has slowed well below potential and RBA forecasts, unemployment and underemployment are now drifting up, forward labour market indicators point to a further rise unemployment ahead, the improvement in wages growth has stalled and inflation looks likely to continue coming in weaker than expected. What’s more the RBA’s own forecasts which see it continuing to undershoot its inflation target through 2020 are built on two more rate cuts and recent comments by Governor Lowe have left the door wide open for more rate cut. So best to get on to it. We see the RBA cutting rates by 0.25% on Tuesday with another 0.25% cut coming in November. We had thought that the low would be 0.5%, but given the continuing weak outlook we now see the RBA ultimately cutting the cash rate to a low of 0.25% with another cut around February next year. This will likely be the absolute bottom though as banks are unlikely to be able to pass on rate cuts beyond that point and negative rates are likely to be counterproductive.

Interestingly, another pointer to a cut on Tuesday is that RBA Governor Lowe is scheduled to speak at a business community dinner after the board meeting just as he did after the June and July meetings when rates were last cut! This presentation will naturally be watched closely in terms of clues regarding future rate moves but we expect him to remain very dovish. The RBA’s Financial Stability Review is expected to express a relatively relaxed stance in relation to the residential property market.

Share markets remain at risk of volatility in the months ahead given unresolved issues around trade and Iran and mixed economic data as we are still in a seasonally weak part of the year for shares. But valuations are okay – particularly against still low bond yields, global growth indicators are expected to improve by next year and monetary and fiscal policy are becoming more supportive all of which should support decent gains for share markets on a 6-12 month horizon.

The election outcome, rate cuts, tax cuts and the removal of the 7% mortgage rate test are driving a rise in national average capital city home prices driven by Sydney and Melbourne. But beyond an initial bounce, home price gains are likely to be constrained through next year as lending standards remain tight, the record supply of units continues to impact and rising unemployment acts as a constraint.