Global share markets fell over past week amid escalating noise around the US/China trade war and increasing signs that it may be impacting business conditions. However, Australia’s “miracle” election set off a surge in the Australian share market with investors pricing out the risk of a Labor Government which resulted in a surge in bank, retail and property shares more than offsetting weakness in resources and utilities. Demand for safe havens pushed bond yields lower, with firming expectations for RBA rate cuts pushing Australian 10-year bond yields to a new record low of 1.53%. Oil and metal prices fell on concerns about global demand, but the iron ore price continued to rise.

The US/China trade war continued to worsen over the last week with the US ramping up bans on US companies trading with Chinese companies and commentary from the Chinese side becoming more strident in its resistance. By his recent actions – increasing tariffs on China, placing bans on trading with Chinese tech companies and tightening the screws on Iran – President has indicated that his appetite for risk is very high and that he believes that he will get a political boost from taking a tough stance with China and Iran. But he also indicated that he is still very sensitive to the message from the share market – by delaying bans on US companies selling to Huawei for 90 days after tech stocks fell in response to the bans. Our view remains that just as we saw last November – when he phoned President Xi and got negotiations going – there will come a point where he will realise just how great the threat to the economy is and backtrack yet again. The problem is that this will likely require further economic weakness and share market falls before we get to that point. So, the trade conflict will likely get worse before it gets better.

Australian shares having surged on the election result and expectations for a rate cut being validated by the RBA are now a bit vulnerable to the worsening trade war and ongoing signs of economic weakness locally. While we see the share market being higher by year end there is a high risk of a short-term correction in line with global shares.

Rate cuts are imminent in Australia, but how far will they go and will we see QE?RBA Governor Lowe has all but confirmed that rate cuts are on the way with his comment that “at our meeting in two weeks’ time, we will consider the case for lower interest rates” after observing that Australia needs lower unemployment to get inflation back to target. This follows the move to a neutral bias in February, significant downwards revisions to its growth and inflation forecasts and signs that unemployment has now bottomed and is starting to move up. All but one economist surveyed by Bloomberg now expect a cut in June up from just two only two weeks ago and two rate cuts are factored into market expectations by August. We expect 0.25% rate cuts in June and August and that all or the bulk of these will be passed on to borrowers given the recent reduction in bank funding costs and that nearly 90% of bank deposits are on interest rates above 0.5% (and hence are able to be cut if the RBA cuts). However, the problem for the RBA is that it needs to get unemployment down but the slowdown in economic growth to around 2% points to a further rise in unemployment which we expect to reach 5.5% by year end. As a result, the odds are that the RBA will have to take the cash rate below 1%, which will see an increasing debate about whether it should use quantitative easing. QE is not our base – as we don’t think things are that bad – and if they were fiscal policy should really take over – but as has been the case at other major central banks the RBA is likely to prefer exhausting cash rate cuts before considering QE and this is unlikely until it gets the cash rate down to 0.5%.

Four positives for the Australian residential property market that taken together are too big to ignore – but don’t get too excited. The Federal Government’s First Home Buyer Deposit Scheme on its own was not a game changer. But when it was followed in quick succession by the demise of the threat to restrict negative gearing and raise the capital gains tax discount, APRA moving to relax the 7% mortgage rate serviceability test and the RBA essentially confirming that rate cuts are on the way it’s all too much too ignore. These developments taken together are big. Particularly the removal of Labor’s threatened property tax changes which were likely scaring off investors. They suggest that property prices will bottom earlier than otherwise and we can see that later this year. As John Maynard Keynes once said “when the facts change, I change my mind”, so we have brought forward and adjusted upwards our expectations for the trough in property prices. But given still high house price to income ratios and poor affordability, still very high debt levels, tighter lending standards and rising unemployment a quick return to boom time conditions is most unlikely. After bottoming later this year, which we expect to leave capital city average prices down 12% from their 2017 high, we see broadly flat house prices for 2020. 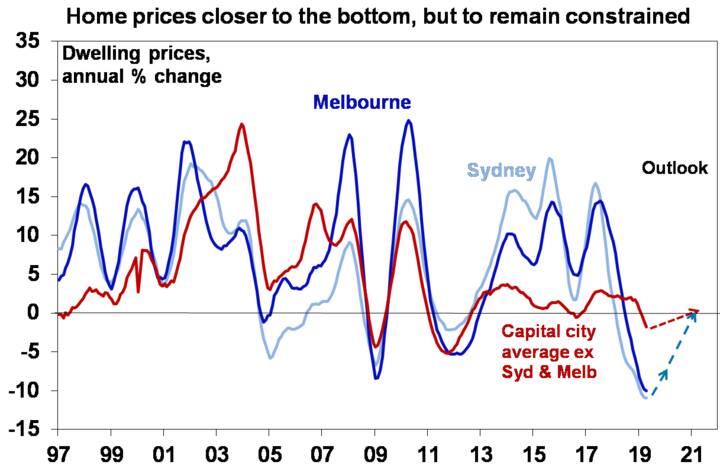 US business conditions PMIs fell sharply in May. While the level is still okay the downtrend is a concern and highlights the negative impact the trade war is having with the PMI survey noting “reduced confidence..linked to global trade tensions.” Meanwhile, the minutes from the last Fed meeting provided nothing new with the Fed getting more confident on growth and seeing the dip in inflation as temporary and so happy to remain patient on rates. That said, the Fed’s staff see inflation staying below target and the return of the trade war since the meeting has added to downside risks suggesting a rate cut later this year is an increasing risk.

The Eurozone composite business conditions PMI stabilised in May and is actually now higher than that in the US but the manufacturing and services components both fell slightly and the German IFO business survey also deteriorated with the return of the trade war likely not helping given Germany’s trade exposure to China.

Japanese core inflation rose in May but only to 0.6%yoy which is way below the Bank of Japan’s 2% inflation target. Meanwhile, Japan’s manufacturing conditions PMI fell back below 50 in May although its still up from its February low.

The re-election of the Modi Government is positive for economic reform and growth in India (assuming concerns about it lurching towards pro-Hindu nationalism aren’t realised).

Australian data was mostly weak with another drop in contruction activity in the March quarter spread across mining, housing and public construciton providing another weak pointer to March quarter GDP growth. What’s more skilled job vacancies fell 1.6% in April and are down around 7% from a year ago pointing to slowing jobs growth. Against this though, business conditions PMIs rose in May but they are very volatilie in month to month.

In the US, expect to see ongoing gains in house prices and a rise in consumer confidence (Tuesday), a rise in pending home sales (Thursday), modest gains in personal spending for April but core private final consumption deflator inflation remaining soft at 1.6% year on year (Friday).

The outcome from the European parliamentary elections may see a lot of hype around Eurosceptics winning seats, but don’t read too much into it. The EU elections tend to see a higher turnout from motivated Eurosceptic voters, most Eurosceptic parties are not serious about leaving the EU and/or the Euro (the Italians and Eastern Europeans) or are irrelevant (those from the UK), the EU Parliament doesn’t have a lot of power and in any case popular support for the Euro across the Eurozone has been rising and is strong at 75%. On the data front, Eurozone economic confidence indicators for April (Tuesday) will be watched for signs of stabilisation after their falls since 2017.

Japanese data to be released Friday is likely to show a continuing tight labour market thanks partly to the falling workforce but industrial production data will be watched for a rebound after recent weakness.

Chinese business conditions PMIs for May (Friday) will be watched for any slippage particularly in response to the re-escalation of the trade war with US.

Share markets are likely to see a further pull back in the short term on the back of uncertainty about trade and mixed economic data. But valuations are okay, global growth is expected to improve into the second half and monetary and fiscal policy has become more supportive of markets all of which should support decent gains for share markets through 2019 as a whole.

Unlisted commercial property and infrastructure are likely to see a further slowing in returns. This is particularly the case for Australian retail property. However, lower for even longer bond yields will help underpin unlisted asset valuations.

National average capital city house prices are likely to remain under pressure from tight credit, record supply, reduced foreign demand and price falls feeding on themselves. However, the combination of imminent rate cuts, support for first home buyers via the First Home Buyer Deposit Scheme, the relaxation of the 7% mortgage rate serviceability test and the removal of the threat to negative gearing and the capital gains tax discount point to house prices bottoming out earlier and higher than we had been expecting. We now look for a 12% top to bottom fall in national capital city average prices, up from 15%.

Cash and bank deposits are likely to provide poor returns as the RBA cuts the official cash rate to 1% by year end.

The $A is likely to fall further to around $US0.65 as the gap between the RBA’s cash rate and the US Fed Funds rate will likely push further into negative territory as the RBA moves to cut rates. Excessive $A short positions and high commodity prices will likely prevent an $A crash though.

Original Source: Produced by AMP Capital Ltd and published on 24 May 2019.  Original article.