Most share markets fell over the last week as uncertainty about whether the US and China will agree a Phase One trade deal ramped up amidst a range of conflicting reports. This comes at a time when markets are vulnerable to a consolidation or correction after strong gains since early October has left investor sentiment at elevated levels. Australian shares got hit by a double whammy of trade uncertainty and accusations that Westpac breached anti-money laundering and counter-terrorism laws 23 million times which dragged financial shares down heavily. Bond yields generally fell on the back of investor caution. Commodity prices were mixed with oil and iron ore up but metals down. The $A fell.

Here we go again on the US/China trade war? Ever since the US trade war with China started its gone through periods of escalation then a truce as talks got underway (with Trump saying “talks are going well – they want to make a deal”) only to see the talks break down and renewed escalation. Developments over the last week suggest that the risk of another breakdown in the latest trade talks and renewed escalation has increased. There has been talk that a deal may be delayed into next year and there have been conflicting reports on whether progress is being made. Chinese agricultural purchases and tariff rollback seem to be the key sticking points in negotiations. And the deteriorating situation in Hong Kong with the US Congress passing a bill supportive of the demonstrators has led to concerns that it will jeopardise the trade talks. This could get even messier if Trump follows through with his scheduled 15 December 15% tariff on a various consumer goods, which will not go down well with US consumers just 10 days before Christmas. Trump’s consideration of exemptions for Apple from tariffs on Chinese imports highlight the damage the tariffs are perversely doing to some US companies relative to companies like Samsung from countries with which the US has a trade deal.

Our assessment remains that the pressure on both sides to ease trade tensions – even if it’s just for 6-12 months – is now far more intense than has been the case over the last 18 months. This includes slowing economic growth in both countries, President Trump’s desire for good news ahead of the elections and to offset the impeachment and a desire to avoid going through with the likely very unpopular 15% tariff on consumer goods on December 15. As a result, we still lean to the view that a deal will be reached. But the risks are high and it may get delayed into next year. The key to watch in the near term is the fate of the scheduled December 15 tariff hike.

There was some good political news in the US with agreement to fund Federal spending out to 20 December, avoiding a government shutdown. A shutdown will likely be avoided beyond 20 December too given neither side wants to start the election year with another debilitating shutdown.

A bit of extra fiscal stimulus in Australia – but not enough which leaves the pressure on the RBA. The past week saw several significant developments on the policy front in Australia.

The bring forward of infrastructure spending is good news and makes sense. The problem is that the extra fiscal stimulus is just 0.1% of GDP spread over 18 months and so is not enough to have a significant impact on the economy. And with a low prospect of any additional fiscal stimulus before the May budget the pressure remains on the RBA as the economy is set on its own forecasts to make little progress towards its goals of full employment and the inflation target over the next two years. As such we remain of the view that it will respond with more rate cuts taking the cash rate down to 0.25% by early next year, quantitative easing and more dovish forward guidance on rates. We still have the next move pencilled in for next month as the alternative means waiting till February which is too long.

While the RBA has been pointing to stronger forecast growth in the years ahead this has been the story for years now. The chart below shows the progression of the RBA’s GDP forecasts since 2012 from the first forecast for each year to the final outcome (or latest forecast). The average downgrade has been 1%. So, it’s been the norm to downgrade the current year and then point to a forecast pick up next year! 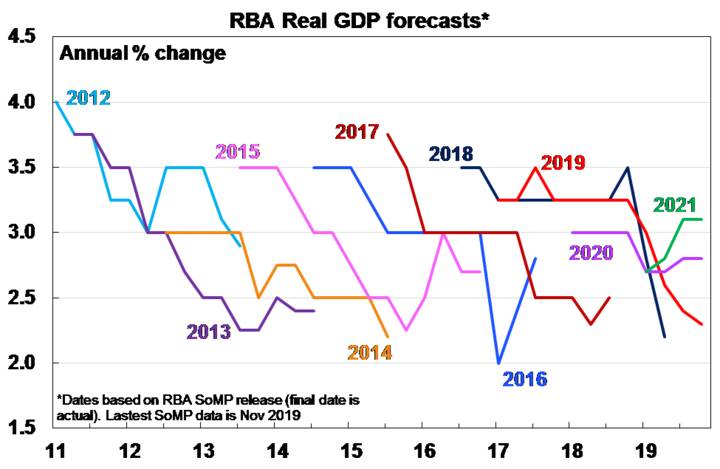 US data pointed to ongoing strength in the housing cycle with home builder conditions remaining strong and starts, permits and existing home sales up. Manufacturing conditions in the Philadelphia region improved and jobless claims remained low but the four-week moving average is trending up slightly. Meanwhile, the minutes from the last Fed meeting offered little that was new with the Fed seeing rates “well calibrated” after their third cut, but remaining dovish and focussed on downside risks and consistent with Fed Chair Powell’s data dependence.

Japanese core inflation rose in October, but only to 0.7%yoy, which suggests that excluding the sales tax hike it would have fallen. The composite business conditions PMI for November rose slightly but only to a still soft 49.9.

China continued to ease monetary policy, but the moves were small with the benchmark rate only cut 5 basis points.

It was a quiet week for Australian data releases. Skilled job vacancies fell yet again in October and are now down 8.5% on a year ago nationally and down 14.4%yoy in NSW and are consistent with a further softening in jobs growth ahead. Meanwhile, the CBA’s flash business conditions PMIs for November fell slightly and are at the low end of the range they have been in this year and well below 2017 highs.

In the US the main focus may be on Black Friday retail sales on Friday following the Thanksgiving holiday. On the data front expect modest gains in home prices, consumer confidence and new home sales (all due Tuesday), a slight rise in core durable goods orders, September quarter GDP growth remaining unchanged at 1.9% and core private consumption deflator inflation remaining at 1.7%yoy (all due Wednesday).

In the Eurozone, confidence data is due Thursday, unemployment is expected to have remained at 7.5% in October and core inflation is likely to have remained weak in November (with both due Friday).

Japanese data for October to be released Friday is likely to show that the labour market remains strong (helped by a falling labour force) but that industrial production fell.

Chinese official business conditions PMIs for November will be released on November 30 and may show a small rise.

In Australia, a speech by RBA Governor Lowe on Tuesday on “Unconventional Monetary Policy: Some Lessons from Overseas” will likely be the focus. The Governor is likely to reiterate earlier RBA assessments that a combination of such policies can be effective, but the key will be whether the Governor continues to describe negative interest rates as “extraordinarily unlikely” and QE as “unlikely”. The very fact that the Governor is devoting a full speech to the topic on the back of its comment a few weeks ago that each further rate cut brings us closer to “the point at which other [unconventional] policy options might come into play” suggests the RBA is seriously contemplating moving down this path. This make sense as interest rates are closing in on zero, less of each rate cut is being passed and there is an increasing debate about their effectiveness. Our assessment remains that it won’t take interest rates negative but that it will strengthen forward guidance on rates to the effect they won’t rise unless inflation is closer to target and it will undertake some form of QE.

On the data front in Australia, expect a 1% gain in September quarter construction activity (Wednesday) with dwelling activity down but engineering and non-dwelling building up slightly, a 0.2% fall in business investment (Thursday) with a small improvement in capex plans and private credit growth (Friday) to show a slight pick-up in housing credit on the back of stronger housing finance commitments.