US, European and Japanese shares slipped over the last week as trade war uncertainty continued to weigh amidst some mixed US earnings reports. Global trade war uncertainties also weighed on the Australian share market with a sharp fall in oil prices particularly hitting energy stocks, but gains in materials, consumer and health stocks left the local market broadly flat for the week. Chinese shares were also up slightly. Reflecting more talk of monetary easing bond yields fell. Commodity prices were mixed with oil down on demand concerns despite ongoing tensions with Iran, but metals and the iron ore price rose. The $A rose as dovish comments by Fed officials saw renewed expectations that the Fed may cut by 0.5% this month rather than 0.25% and there was more talk of the US intervening to push the $US down.

Will the US intervene to push the $US lower? This is a hot topic after President Trump’s tweets claiming other countries are manipulating their currencies and with Treasury Secretary Mnuchin saying they could consider it in the future. Trump is clearly annoyed that the $US is so strong offsetting the “benefits” of his tariffs, ignoring the fact that his fiscal stimulus and tariffs are the main reasons for the strong $US in the first place. With Trump’s penchant for doing things differently intervention would not be surprising if the $US doesn’t weaken – but if it’s a Treasury only action (as the Fed is unlikely to join in) & its unilateral it’s hard to see it having much lasting impact.

Remember the US debt ceiling that caused so much consternation and market nervousness back in 2011 and 2013? Well the US Government is up against it again– with cash reserves expected to run out in October or possibly in September. Failure to increase the debt ceiling will see the US Government default on some payments. While its likely to prioritise debt servicing a default on any commitment would be seen as a big deal and could lead amongst other things to another downgrade in its sovereign credit rating and financial market volatility that would impact globally including in Australia. Of course, the US Government and Congressional leaders won’t allow the US to default so a deal is likely to be reached – but at the last moment. The “good” news is that both sides are not averse to more spending and debt unlike the Tea Party “dominated” Republicans when Obama was President and they learned that being seen as dogmatically blocking a deal can backfire politically. That said they still play games and have different priorities and its tangled with the need to agree a budget. The other complication is that Congress is set to go on summer recess from July 27 so it ideally needs to be resolved before then given the risk the cash may run out in September.

Not a lot of progress on US/China trade talks. While the G20 agreement between Presidents Trump and Xi to re-start trade talks was greeted with fanfare, it seems both sides disagree as to what was agreed at the G20. Trump’s tweet that he could impose additional tariffs on China was a statement of the obvious, but they are supposed to be in a truce! We remain of the view that a deal will be reached – given the threat the economic fall out would pose to Trump’s 2020 re-election prospects – but the risk is significant that it will end in failure, necessitating significantly more fiscal stimulus and monetary easing on both sides to limit the economic fall out.

The past week saw Korea and Indonesia join the global monetary easing cycle in cutting policy rates. Both likely have more to go and they join China, India, Australia, NZ, the US and the Eurozone in easing or moving towards easing. Rate cuts are normally positive for share markets unless there is a recession, which we think remains unlikely.

1969 and man on the Moon. 1969 wasn’t all good: the Vietnam War was in full swing, the love of Woodstock gave way to the horror of Altamont and economic policy making was becoming dodgy. But on most measures 1969 stacks up as a very good year with: George Harrison proving there was more to the Beatles than Lennon and McCartney, Elvis bouncing back with Suspicious Minds and live performances, Serge and Jane with Je T’aime, The Real Thing, The Brady Bunch, On Her Majesty’s Secret Service being one of the best Bond films, flares, supersonic tourist travel with the Concorde, etc…and of course man on the Moon. Some lamented that the US can spend $220bn (in today’s dollars) to put a man on the Moon but can’t feed all its people. But the benefits were huge in terms of products & technologies that were spun off or advanced by the Apollo program: Teflon; space food; Velcro; snap frozen foods; lightweight insulation; cordless power tools; the miniaturisation and micro-electronics that underpin modern computers & smart phones; GPS; kidney dialysis; MRI scanning; etc. And images looking back at Earth added to the sense of its fragility and how we should look after it. Nothing like it has been seen since. Fortunately, I got to see it live on TV…& I still wear flares and watch re-runs of OHMSS.

US economic data was mostly good. While housing starts and permits fell, the Leading Index fell and the Fed’s Beige Book described most things as modest or moderate with an increased reference to tariffs, retail sales rose strongly in June, manufacturing production rose, home builder conditions improved slightly, jobless claims remain low and business conditions in the New York and Philadelphia regions improved significantly in July. Only 14% of US S&P 500 companies have reported June quarter results, but so far so good with 78% beating on earnings, 64% beating on sales and expected earnings growth for the quarter moving up to flat from a small fall a few weeks ago and likely to finally end around +2.5%yoy.

Japanese core inflation remained weak at just 0.5% year on year in June, maintaining pressure on the Bank of Japan.

China slowing, but not badly. Chinese annual GDP growth slowed to 6.2% in the June quarter as expected, its lowest since 1992, but the quarterly pace of growth picked up, June industrial production, investment and retail sales all accelerated by more than expected and property price growth remains solid.

Jobs growth slowing, unemployment drifting up – pressure remains on the RBA. While the flat outcome for employment in June was influenced by the ending of temporary election related jobs in May, annual growth in employment and hours worked has slowed from their highs and our Jobs Leading Indicator has slowed to its weakest since March 2014 and points to a further slowing in jobs growth ahead. This in turn is likely to see unemployment drift up to 5.5% by the end of the year and underemployment remain high, ensuring that “spare capacity” will remain high in the Australian labour market. 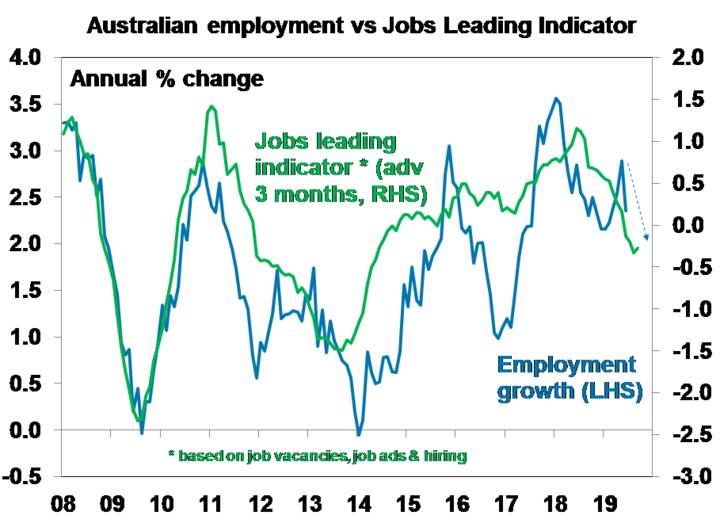 While the rate cuts of June and July, the tax refunds for low and middle income earners, the post-election boost to confidence and strong infrastructure investment should help limit the rise in unemployment, they are unlikely to be enough to get unemployment down to the RBA’s May forecast for 5% by year end, let alone the 4.5% or much less that will be needed to get wages growth and inflation up. As a result, while the RBA is likely to be on hold for a few months while it “monitor[s] developments in the labour market”, we remain of the view that it will still cut interest rates further later this year ultimately taking the cash rate down to 0.5% early next year. More fiscal stimulus is also likely to be needed (the lowering of the deeming rate is helpful but hardly significant), and the ongoing strength in the iron ore price (which could add $10bn or so to tax revenue this financial year) could make this possible without eating into the projected budget surplus.

Progress in US/China trade negotiations and US/Iran tensions are likely to remain a key focus for markets over the week ahead.

In the US, June quarter GDP data due Friday is likely to show a sharp slowing in growth to around 1.8% annualised from 3.1% in the March quarter, but the details will likely be more positive in showing a rebound in private final demand with trade and inventory being the main drags. In terms of other data expect to see a modest rise in house prices (Tuesday), gains in existing home sales (Tuesday) and new home sales (Wednesday), an improvement in business conditions PMIs for July (also Wednesday) and a rise in durable goods orders (Thursday). The flow of June quarter earnings reports will also ramp up.

The ECB at its meeting on Thursday is likely to follow up President Draghi’s dovish shift and announce or flag an easing in monetary policy based on some combination of dovish forward guidance on rates, rate cuts and a new quantitative easing program. Eurozone business conditions PMIs for July (Wednesday) are likely to show further signs of stabilisation after their falls into early this year.

In Australia, speeches by the RBA’s Kent (Tuesday) and Lowe (Thursday) will be watched for clues on rates but its hard to see what new they could add. The CBA’s business conditions PMIs are due Wednesday and skilled vacancies Thursday.

Share markets remain vulnerable to short term volatility and weakness on the back of uncertainty about trade, Middle East tensions and mixed economic data. But valuations are okay – particularly against low bond yields, global growth indicators are expected to improve into the second half if the trade issue is resolved and monetary and fiscal policy becoming more supportive all of which should support decent gains for share markets over the next 6-12 months.

The combination of the removal of uncertainty around negative gearing and the capital gains tax discount, rate cuts, support for first home buyers via the First Home Loan Deposit Scheme and the removal of the 7% mortgage rate test suggests national average capital city house prices are at or close to bottoming. Next year is likely to see broadly flat prices as lending standards remain tight, the supply of units continues to impact and rising unemployment acts as a constraint.

The $A is likely to fall further to around $US0.65 this year as the RBA moves to cut rates by more than the Fed does. Excessive $A short positions, high iron ore prices and Fed easing will help provide some support though with occasional bounces and will likely prevent an $A crash.