The past week saw some cautiousness creep back into share markets with increased uncertainty about a US/China trade deal coming at a time when major share markets had become a bit vulnerable to a pull back after a run of good gains since early October. US shares managed to rise slightly but Eurozone and Japanese shares fell slightly, and Chinese shares fell partly on the back of weak economic data. Australian shares managed to buck the global weakness over the last week as market expectations for an RBA rate cut rebounded and defensive or yield sensitive sectors like health, consumer staples and real estate rose strongly. Reflecting the more cautious tone bond yields fell as did metal and oil prices but iron ore prices rose. The $A fell as expectations for further RBA rate cuts increased again.

Trade uncertainty up a bit, but pressure to make a deal remains immense. Uncertainty on the US/China trade front ramped up again over the last week. It was originally meant to be ready to be signed by now but there is now talk of negotiations stumbling around a dollar value being attached to Chinese agricultural purchases and a roll back in tariffs. Comments by President Trump threatening to raise tariffs substantially if they don’t make a deal but that a trade agreement is “moving along very rapidly…China wants to make a deal” added to the uncertainty. This could go on for while but there are several things to note. First the Phase One deal was never meant to be a complete break through – just an easing in tensions with easy to do measures like Chinese agricultural purchases, a cancellation of the scheduled December 15 tariff hike and maybe some of the September tariff hikes and some sort of commitment to reaching further agreement on trade issues. Second the pressure on both sides to ease tensions is immense:

Weak jobs data and slowing wages growth highlights that Australia still needs more policy stimulus. Economic growth is likely to remain below potential so unemployment, underemployment and spare capacity will remain relatively high and this will continue to result in weak wages growth and inflation. Ideally fiscal stimulus – in the form of faster tax cuts, a boost to Newstart, investment incentives and a bring forward of infrastructure spending where possible – is needed from here. The Government’s 15% tax break for infrastructure projects and comments by Treasurer Frydenberg that “we’re always looking for opportunities to reduce taxes” which holds out the hope of accelerated personal tax cuts are welcome. But it’s unclear that fiscal stimulus will be enough or come quickly enough, particularly with the Government still primarily focussed on safeguarding the surplus. In the absence of significant fiscal stimulus soon the pressure remains on the RBA where we expect to see further monetary stimulus in the form of rate cuts down to 0.25%, quantitative easing (possibly designed to lower bank funding costs and allow banks to pass on more of rate cuts) and more dovish forward guidance on rates.

Further monetary easing will no doubt fuel further gains in Sydney and Melbourne house prices (which is another reason why fiscal stimulus is preferred!) – but the RBA has to set monetary policy for the average of Australia and not just two cities. Which probably means that we should expect a renewed tightening of bank lending standards next year!

US data was benign with small business optimism rising slightly and remaining strong, unemployment claims up a bit but remaining low and core CPI and producer price inflation coming in weaker than expected. Meanwhile Fed Chair Powell’s Congressional testimony leant dovish, seeing the current stance of monetary policy as appropriate but standing ready to ease again if necessary in the face of poor data & various risks.

Eurozone September quarter GDP growth was confirmed at 0.2% quarter on quarter but was revised up to +1.2% year on year (from +1.1%). Germany avoided a technical recession with better than expected GDP growth of +0.1%qoq/+0.6%yoy. Trade wars, reduced global demand and auto sector turmoil have all weighed on Germany.

The latest Spanish general election was pretty much as expected in failing to resolve the political impasse. The Socialist party got most of the votes again but is well short of a majority so will need to rely on other parties to govern. Since Spanish support for the Euro is high and no major party was advocating a Spexit it has little in the way of significant implications beyond Spain.

Japanese September quarter GDP growth at 0.1% quarter on quarter or 1.3% year on year was a bit weaker than expected given that it was ahead of the consumption tax increase which normally brings spending forward. But with Japan’s population falling slightly 1.3% pa growth is pretty good (and better than in Australia where per capita GDP is falling).

Chinese activity data for October was generally softer than expected with slowing growth in investment, industrial production and retail sales. The slowing in retail sales may reflect deferral ahead of the Nov 11 online shopping festival, but the slowing in IP & investment is a concern. It all means added pressure to reach a trade deal with the US and points to more policy stimulus. So far credit growth hasn’t really lifted much but a further easing is likely. While CPI inflation accelerated further in October on the back of a doubling in pork prices over the last year, core inflation remained weak at 1.5% year on year and producer price deflation actually intensified. So the rise in Chinese inflation is unlikely to prevent further policy stimulus. 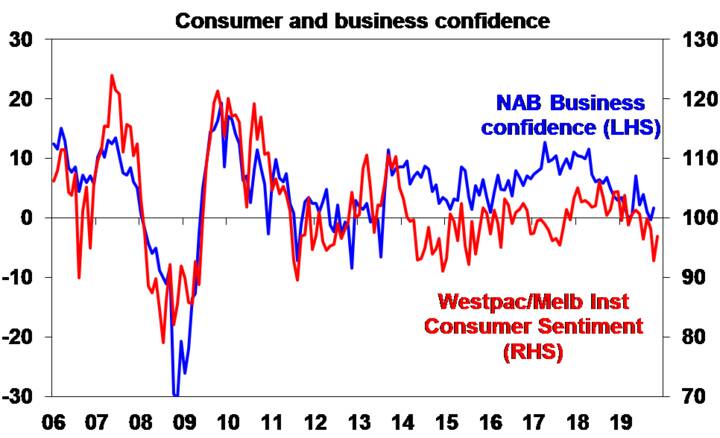 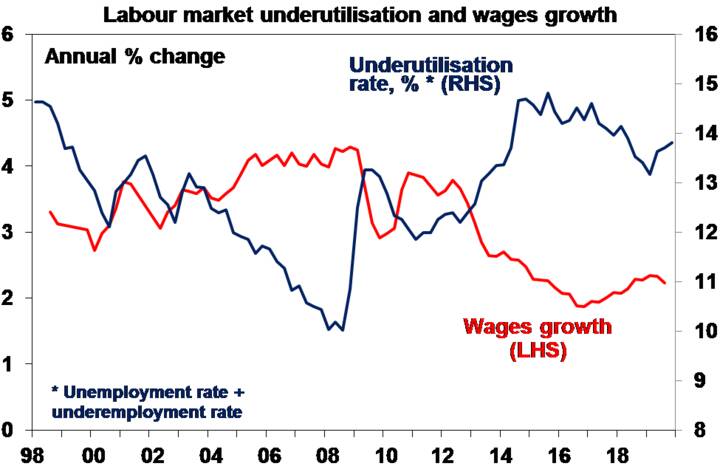 The 19,000 reported loss of jobs in October probably contains an element of statistical noise as the jobs data is based on a survey not a census, but jobs growth has slowed down since early last year and this is consistent with the slowing in the economy and softness in job ads and vacancies pointing to some further softening ahead. This points to a further rise in unemployment and underemployment at a time when they are already high. The uptrend in unemployment and underemployment will weigh further on wages growth, which slipped to 2.2% in the September quarter (from 2.3%) partly due to a slower increase in the minimum wage this year.

In the US, the focus is likely to be on November business conditions PMIs to be released Friday. These will be watched for further signs of stabilisation. Housing related data is likely to show continued strength in home builder conditions (Monday), a solid rise in housing starts (Tuesday) and a rise in existing home sales (Thursday). The minutes from the Fed’s last meeting are due Wednesday.

Eurozone business conditions PMIs for November (Friday) will be watched for stabilisation after a slight rise in October.

Japanese core inflation for October (Friday) is expected to get a boost from the GST hike but absent that its likely to have remained weak and based on data for Tokyo may even have fallen slightly. Business conditions PMIs will be watched for some reversal of the sharp tax hike related fall seen in October.

In Australia, skilled vacancies (Wednesday) are likely to be soft, the minutes from the last RBA meeting are due Tuesday & the CBA’s business conditions PMIs will be released Friday.

The election outcome, rate cuts, tax cuts and the removal of the 7% mortgage rate test are driving a rebound in national average capital city home prices led by Sydney and Melbourne. But beyond an initial bounce, home price gains are likely to be constrained as lending standards remain tight and rising unemployment acts as a constraint. The risk though is that the recent surge in prices goes on for longer as property price gains in Australia have a habit of feeding on themselves.