Global share markets rose over the last week helped by optimism on US/China trade talks, progress towards averting a renewed partial government shutdown in the US along with okay earnings results. Australian shares were little changed having outperformed sharply in the previous. Bond yields were little changed. The oil price rose but metal and iron ore prices fell. The $A was little changed as the $US rose.

Progress in US/China trade talks and the (likely) avoidance of a return to the partial government shutdown in the US are both positive to the extent that they help dial down the political risk that weighed on investors last year. If the March 1 tariff deadline is delayed it’s likely that the US auto tariff threat will also be delayed as Trump has been inclined to avoid multiple battles at once. Avoiding a return to the shutdown – even if Trump goes down the contentious path of declaring a National Emergency to get Wall funding – is good news as it removes a threat to the economy and adds a bit to confidence that a debilitating battle over the need to raise the debt ceiling from March will be avoided.

Some lessening in political threats (for now) along with a swing to more dovish/stimulatory economic policy globally are consistent with our view that this year will be a decent year for share markets. However, with share markets having run hard from their December lows and technically overbought and economic data still weak the risk of a short term pull back is high. The Australian share market particularly looks to have run ahead of itself. Earnings results have been better than feared but economic growth looks to be slowing, the earnings outlook is constrained, and RBA rate cuts are still a way off.

US data was messy over the last week. Retail sales fell sharply in December possibly reflecting the impact of the shutdown and share market falls at the time, small business confidence continued to fall and jobless claims rose continuing a rising trend. Against this, job openings and hiring were all strong. Meanwhile, headline inflation was weak thanks to falling energy prices, but core inflation was flat at 2.2% year on year and with momentum accelerating again. The weakness in retail sales is consistent with the Fed pausing, but the acceleration in core CPI inflation in recent month means that it’s premature to conclude that the Fed has finished tightening for this cycle. We expect the Fed to be on hold for the next six months with maybe one hike later this year.

The US December quarter earnings reporting season continued to surprise on the upside over the past week, but its still showing a slowdown from previous quarters as the tax boost and underlying earnings growth has slowed. 80% of S&P 500 companies have now reported with 72% beating on earnings with an average beat of 3.3% and 60% beating on sales. Earnings growth is running at 18.5% year on year for the quarter. As can be seen in the next chart the level of surprises and earnings growth is slowing down. US earnings growth is likely to be around 5% this year. 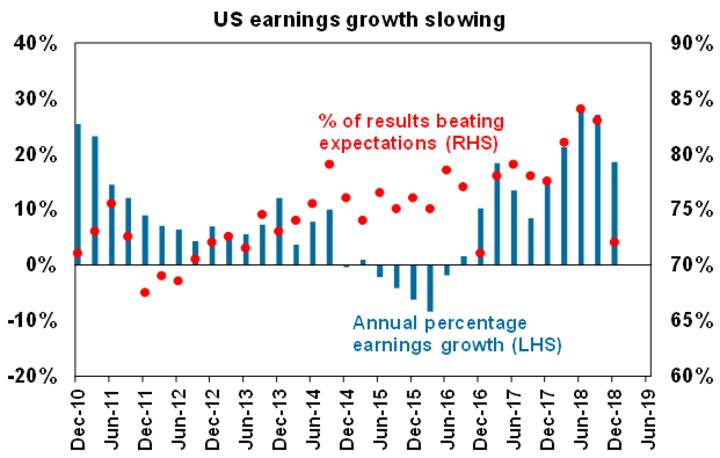 Eurozone December quarter GDP growth was confirmed at 0.2% quarter on quarter or 1.2% year on year. Germany just missed out on falling into a technical recession with growth of just 0.02% qoq. Pressure on the ECB and the German government for more stimulus is intensifying.

Japan’s economy grew again in the December quarter after a natural disaster affected September quarter. But GDP is flat on a year ago. That said inventory, trade and public investment were the drags on growth and consumption & investment were solid. The BoJ will still have to keep the pedal to the metal.

Chinese exports and imports bounced back in January suggesting that things aren’t as bad as feared. That said it would be wrong to get too excited either way as the Lunar New Year holiday is known to distort Chinese data around this time of year. Meanwhile inflation continued to fall in January.

After weeks of poor data, Australian data was mixed over the last week. On the positive side the NAB survey measure of business conditions and consumer confidence bounced back in January and February respectively although both remain at uninspiring levels. Pressure remains on the housing market though with housing finance sliding sharply in January, reports that China has moved to make it even tougher for its citizens to move money out of China destined for property markets in Australia and elsewhere and ASIC moving to toughen up its regulatory guidance to lenders to the effect that Household Expenditure Measure benchmarks are too low an estimate of borrowers’ living expenses and that actual verification of income is required. In terms of the latter while many lenders have already moved in this direction its likely that there is still further to go in terms of tightening up lending standards.

The Australian December half earnings reporting season has been better than feared but shows a slowdown in growth and caution regarding the outlook. So far about a third of results have been released. 60% of companies have seen their share price outperform on the day of reporting (which is above a longer term norm of 54%) and 45% have surprised analyst expectations on the upside which is around the long term average, but a more than normal 33% have surprised on the downside, the proportion of companies seeing profits up from a year ago has fallen and only 55% have raised their dividends which is a sign of reduced confidence in the outlook – six months ago it was running at 77%. Concern remains most intense around the housing downturn and consumer spending. 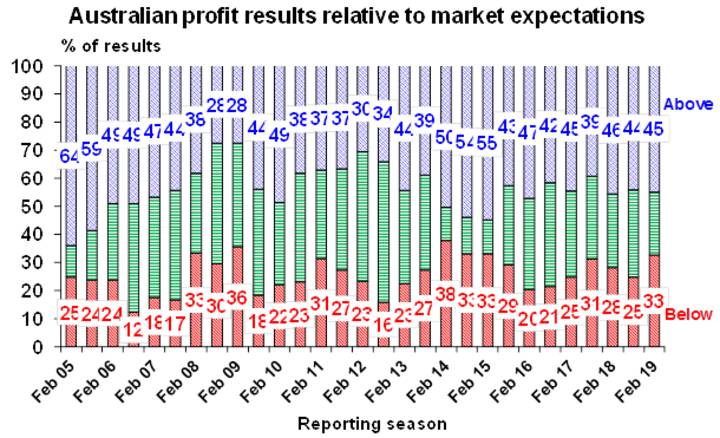 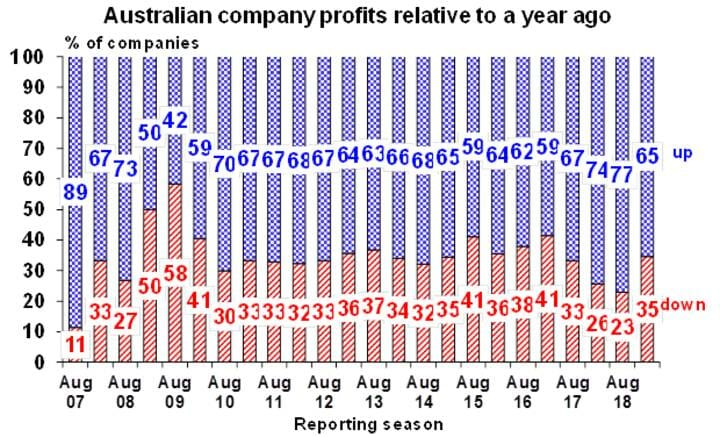 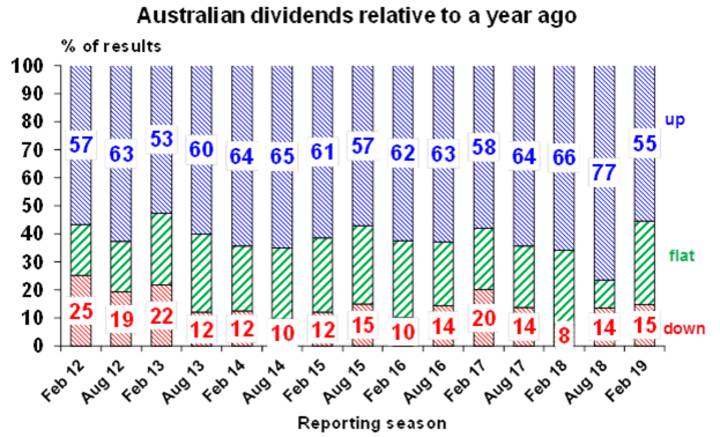 In the US, expect the minutes from the Fed’s last meeting (Thursday) to confirm that the Fed remains upbeat but that it is waiting patiently to decide what to do next in terms of interest rates and that it might end its quantitative tightening process earlier than previously expected. On the data front expect a slight rise in the National Association of Homebuilders’ conditions index (Tuesday), a modest rebound in underlying durable goods orders, business conditions PMIs for February to remain around 54-55 and existing home sales (all due Thursday) to rise slightly.
In the Eurozone the focus will be on whether the business conditions PMIs (Thursday) show signs of trying to stabilise after falling through most of last year or continue to fall.

Japanese inflation data for January is expected to show core inflation rising slightly but only to 0.4% year on year.

In Australia the minutes from the last RBA board meeting (Tuesday) will confirm the shift to a neutral bias in terms of the immediate outlook for interest rates and Governor Lowe’s parliamentary testimony on Friday will be watched for further clues in terms of how the RBA is seeing the outlook for the economy. On the data front expect December quarter wages growth (Wednesday) to hold around 0.6% quarter on quarter or 2.3% year on year as the lift in the minimum wage increase to 3.5% continues to feed through. January jobs data is expected to show a 5000 gain in employment and a rise in unemployment to 5.1%. Data for skilled vacancies and the February CBA business conditions PMIs will also be released.

The Australian December half earnings results season will see its busiest week with 70 major companies reporting including Ansell, Brambles and Coles (Monday), BHP, Bluescope and Cochlear (Tuesday), Fortescue, Stockland, Seven Group and Woolworths (Wednesday), and Coca-Cola Amatil, Nine and Wesfarmers (Thursday). 2018-19 consensus earnings growth expectations are around 4% for the market as a whole. Resources, building materials, insurance and healthcare look to be the strongest with telcos, discretionary retail, media and transport the weakest and banks constrained.

Shares are likely to see volatility remain high with the high risk of a short term pull back, but valuations are okay, and reasonable growth and profits should support decent gains through 2019 as a whole helped by more policy stimulus in China and Europe and the Fed pausing.

National capital city house prices are expected to fall another 5-10% this year led again by 15% or so price falls in Sydney and Melbourne on the back of tight credit, rising supply, reduced foreign demand, price falls feeding on themselves and uncertainty around the impact of tax changes under a Labor Government.