Share markets, rose over the past week with the combination of expectations for rate cuts/policy stimulus and the tariffs being avoided on Mexico offsetting ongoing uncertainty about the US/China trade war and geopolitical tensions in the Middle East and Hong Kong. Australian shares made it to an 11 year high led by resources stocks and defensive sectors like healthcare, telcos and consumer staples. Despite a boost from more ship attacks near the Strait of Hormuz oil prices fell not helped by rising US stockpiles, but metal and iron ore prices rose. The $A fell as the $US rose on safe haven demand and RBA rate cut expectations increased.

Trade war uncertainty is likely to ramp up even more over the next two weeks ahead of a possible Trump/Xi meeting at the 28-29 June G20 summit. President Trump, perhaps emboldened by his success with Mexico, is doing his usual Art of the Deal stuff in ramping up the threats of more tariffs, but so far it seems the Chinese are reluctant to play ball and haven’t confirmed whether the meeting will occur or not. Our view remains that a deal will eventually be reached given the damage not doing so will cause to both economies and hence Trump’s 2020 re-election prospects. But the risk is that China really has dug in for another “long march” and will hope that the damage to the US economy will see Trump lose next year and they can negotiate with a new president.

Weak inflation is well and truly a global phenomenon. May data for inflation showed falling core inflation rates in the US, China, Eurozone, India, South Korea and Thailand. All of which supports lower for longer interest rates and bond yields. Last year’s fears of rising global inflation and interest rates proved yet again to be another false dawn. Just as well the RBA did not raise rates to prepare for higher global rates as some were advocating a year ago. If it had done that we would be facing even weaker growth and inflation and a higher risk of recession.

US economic data released over the last week was generally solid with small business confidence rising to its highest in seven months and with job openings, hiring and quits remaining strong suggesting that the weak May payrolls report may be an aberration, albeit jobs growth may be slowing. Mortgage applications to purchase and to refinance have also surged higher implying a boost to household spending power and home buyer demand. Meanwhile, core consumer price inflation fell to 2% year on year in May (implying core private final consumption deflator inflation of around 1.5%yoy) and producer price inflation slowed. Ongoing low US inflation just adds to the probability that the Fed will cut rates this year.

Chinese imports fell more than expected in May suggesting weak domestic demand growth. Exports surprisingly rose but this may reflect front running of the latest US tariff hike. While rising food prices (partly due to swine flu) pushed up consumer price inflation in May, underlying inflation was soft at 1.6%yoy and producer price inflation fell to just 0.6%yoy suggesting that inflation remains no barrier to further policy easing in China. On the policy front, credit growth edged slightly higher in May consistent with easier monetary policy and the government made it easier to finance infrastructure projects underlining that infrastructure will be a key plank of its stimulus plans.

Australian data releases over the last week were messy. While the NAB business survey for May showed a post election bounce in confidence business conditions weakened further. Consumer confidence softened in June with responses up after the electon but falling sharply again after the rate cut and weak GDP data. Australians’ caution in regards to spending and taking on debt is highlighted by a continuing roughly 25% of surveyed Australians in the Westpac/MI consumer survey responding that paying down debt is the wisest use for savings, which is way above the pre GFC norm. 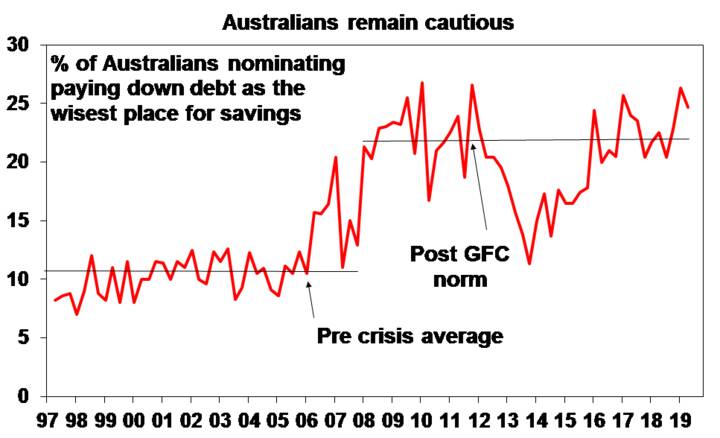 And while employment rose solidly in June the details were weak with full time jobs soft for two months in a row, temporary election workers likely driving the surge in part time jobs and unemployment flat at 5.2% and the total of unemployment and underemployment remaining very high at 13.7%. What’s more falling job advertisements point to slowing jobs growth ahead. Our assessment remains that unemployment will rise to 5.5% by year end.

I am not a great fan of the various “stars” – GDP* or potential GDP, r* or the natural rate of interest, or U* the so called non-accelerating inflation rate of unemployment because they are all hard to measure with much accuracy. They are all useful in making economists look scientific but their value is dubious when you get up close. Look at last year’s crazy predicitions that US inflation was about to take off because the US was above GDP*, below U* and below r*. We are still waiting as inflation falls again! And so I have failed to put much effort into working out what U* is in Australia. That said the RBA does so I guess I should pay some attention. Assistant Governor Ellis has reinforced Governor Lowe’s message that U* or NAIRU has likely fallen in Australia to maybe around 4.5%. All of which highlights the problem for the RBA because actual unemployment (let alone underemployment) is well above this and looks likely to rise further as growth remains weaker than necessary to absorb new entrants to the workforce. Which brings us back to our conclusion that the cash rate is likely heading to 0.5% by early next year, more fiscal stimulus is desirable to help the RBA and QE – or better still direct RBA financing of government spending – is increasingly likely.

There is some good news on the fiscal stimulus front with the Federal Government considering speeding up small infrastructure projects to help the economy and NSW flagging another round of asset sales to fund new infrastructure spending. The suggestion to bring back Joe Hockey’s asset recyclicing program to encourage state infrastructure spending makes sense. On current plans public sector capex growth will peak this year so needs to be extended to help offset the housing downturn.

Interest rates will be the focus in the week ahead with the Fed meeting Wednesday, the Bank of Japan and Bank of England meeting on Thursday and RBA minutes and a speech by RBA Governor Lowe.

In the US, the Fed is likely to remain on hold but signal that rate cuts are probably on the way. A rate cut is possible following Wednesday’s meeting but the Fed is more likely to wait for a bit more clarity on the US/China trade war with a possible G20 meeting between Trump and Xi in late June and also wait to see whether the soft payroll report for May was an aberration or not. However, with the rising trade threat to growth, some economic data weakening and inflation running below target it is likely to signal that it is open to cutting rates if needed, its inflation forecasts are likely to be revised down and the so called dot plot of Fed officials interest rate expectations is likely to move lower. Fed Chair Powell also speaks Wednesday and is likely to lean dovish. We anticipate two Fed rate cuts this year.

On the data front in the US, business conditions PMIs to be released Friday will be watched closely to see if there is any improvement after recent declines which were partly due to trade related uncertainty. Meanwhile, expect a slight rise in home builder conditions (Monday), flat housing starts (Tuesday) and a rise in existing home sales Friday.

The Bank of England (Thursday) is expected to leave monetary policy on hold.

The Bank of Japan is also expected to leave monetary policy on hold on Thursday but with a strong easing bias. On the data front expect core inflation to remain soft (Friday).

In Australia, the minutes from the RBA’s last board meeting (Tuesday) and a speech by RBA Governor Lowe (Thursday) are expected to maintain a strong dovish bias and reinforce expectations of further rate cuts. On the data front expect March quarter ABS data to show a further 3% decline in national dwelling prices (Tuesday) based on private sector surveys, skilled vacancies to have fallen again in May (Wednesday) and December quarter population growth (Thursday) to have remained strong at around 1.6%yoy. NSW and SA will release their budgets on Tuesday with falling stamp duty revenue likely to impact NSW.

Share markets are likely to see further volatility and weakness in the short term on the back of uncertainty about trade and mixed economic data. But valuations are okay – particularly against low interest rates, global growth is expected to improve into the second half if the trade issue is resolved and monetary and fiscal policy has become more supportive of markets and will likely become even more so all of which should support decent gains for share markets through 2019 as a whole.

National average capital city house prices are likely to remain under pressure from tight credit, record supply and reduced foreign demand. However, the combination of imminent rate cuts, support for first home buyers via the First Home Loan Deposit Scheme, the relaxation of the 7% mortgage rate serviceability test and the removal of the threat to negative gearing and the capital gains tax discount point to house prices bottoming out by year end and higher than we had been expecting. We see a 12% top to bottom fall in national capital city average prices. Next year is likely to see broadly flat prices as rising unemployment acts as a bit of a constraint.

The $A is likely to fall further to around $US0.65 this year as the gap between the RBA’s cash rate and the US Fed Funds rate will likely push further into negative territory as the RBA moves to cut rates by more than the Fed does. Excessive $A short positions and high iron ore prices may help provide some support through and will likely prevent an $A crash.