The past week saw good news on the geopolitical front with the US and China reaching a Phase 1 trade deal, Congressional agreement on the USMCA (NAFTA replacement), Congress averting another US Government shutdown from December 20 and the Conservatives on track for a big majority in the UK’s election. This pushed most global share markets higher, with the exception of Chinese shares which rose strongly the week before. Australian shares rose led by sharp gains in resources stocks helped by the positive news on trade but with falls in defensives and yield sensitive stocks. Reflecting the risk on tone bond yields, commodity prices and the $A rose with the $US down slightly.

Agreement between the US and China on a Phase 1 trade deal is good news. While the details are yet to be fully announced or finalised legally, it averts threatened December 15 tariff hikes, looks likely to see the roll back of some earlier tariffs, sees China purchase more US agriculture products; and sees tighter Chinese IP protections. Whether Phase 2 talks happen remains to be seen but the de-escalation is good news for now and takes some pressure off the global economy which makes it good news for commodity prices and Australia.

The US Federal Reserve held monetary policy on hold with Fed Chair Powell remaining dovish. While the Fed was a bit more upbeat regarding unemployment and removed a reference to “uncertainties” and the dot plot of Fed officials’ interest rate expectations saw no rate change next year and one hike in each of 2021 and 2022, Fed Chair Powell downplayed the dot plot and reiterated that he wants to see “a significant move up in inflation that is also persistent before raising rates.” Our base case is for rates to be on hold next year but with the risk of one more cut.

The Conservatives UK election win will mean that PM Johnson’s Brexit deal with the EU will be signed, the UK will have a soft exit from the EU (ie leave but retain current trading arrangements) by January 31 and then enter into negotiations for a free trade deal. These could still end in a hard exit if no free trade agreement is reached, but the threat of economic disruption will likely work against that particularly given that the UK will be officially out of the EU anyway and PM Johnson looks like he won’t be held back by hard line Brexiteers in the talks. The avoidance of far left policies under a Labour Government is probably also a short term positive for UK assets including shares and the British pound, although as always there is a risk of a near term “sell on the fact” pull back as markets had generally anticipated a Conservative victory.

Will there be a Santa rally this year? This normally kicks in around mid-December on the back of festive cheer and new year optimism, the investment of any bonuses, low volumes and no capital raisings. Over the ten years to 2017 the period from mid-December to year end has seen an average gain of 1% in US shares with shares up in this two-week period 7 years out of ten. In Australia, over the ten years to 2017 the average gain over the last two weeks of December has been 2.2% with shares up 8 years out of ten. Which is why December is normally a strong month. Last year Santa didn’t really come until after Christmas owing to US related political risks. This year it may be coming early thanks to the recent decline in various geopolitical threats. 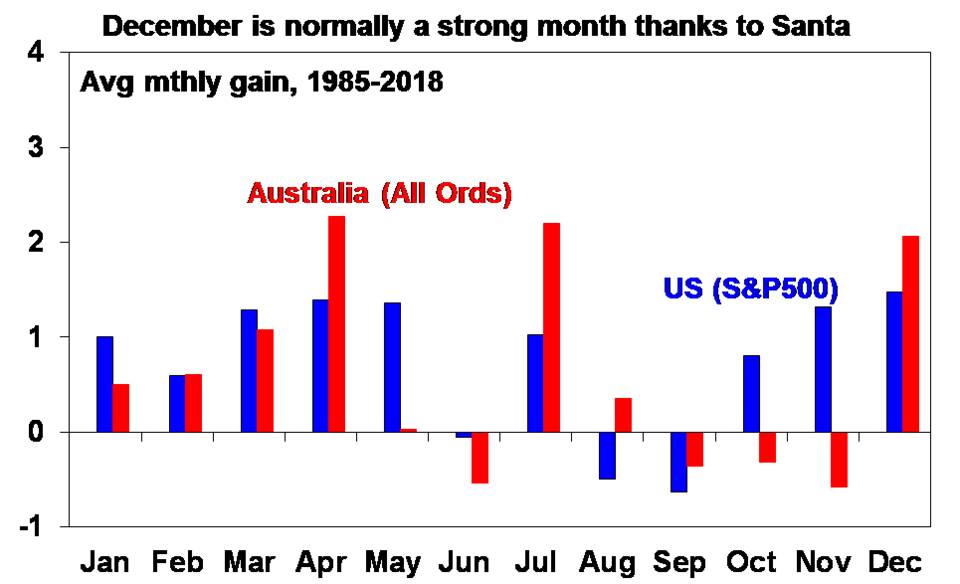 Japanese September quarter GDP growth was revised up significantly thanks to stronger consumer spending and business investment. The December quarter Tankan was mixed with weaker manufacturing but strong services.

ECB President Lagarde’s first ECB meeting provided no surprises with an affirmation of Draghi’s stimulus program & a bit of confidence that growth may be bottoming.

Australian economic confidence readings remain weak. Business conditions were unchanged in November and confidence fell slightly according to the NAB business survey and the Westpac/MI survey showed a fall back in consumer confidence & a continued focus on paying down debt. 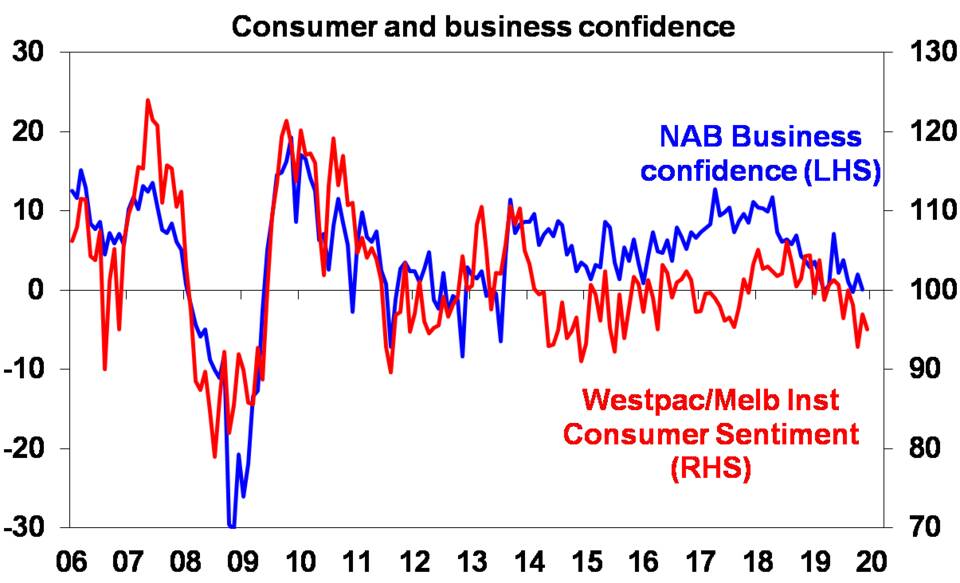 In the US, expect December business conditions PMIs (Monday) to be flat to up slightly, home builder conditions (also Monday) to remain strong, housing starts and industrial production (Tuesday) to rise, existing home sales (Thursday) to be down slightly and personal spending for November (Friday) to show a solid gain with core private final consumption deflator inflation rising slightly to 1.7% year on year.

Eurozone business conditions PMIs (Monday) will be watched for a further improvement.

Japanese business conditions PMIs will be released Monday and core inflation (Friday) for November is expected to remain weak at around 0.7% year on year (weaker still if the sales tax hike is excluded).

Chinese economic activity data due Monday for November is expected to show investment growth remaining around 5.2% year on year, but industrial production growth picking up slightly to 5% and retail sales growth picking up to 7.6%.

In Australia, the Federal Government’s Mid-Year Economic and Fiscal Outlook (MYEFO) is expected to show the budget on track for a decent surplus this financial year despite downwards revisions to growth and wages forecasts, thanks to higher iron ore prices and employment providing an offsetting boost to revenue. Minimal new fiscal stimulus is expected to be announced beyond that which has already been flagged since the April Budget. The MYEFO is expected to show downwards revisions to the Government’s GDP growth forecasts for this financial year to 2.25% (from 2.75%) and a reduction in the wages forecast to 2.3% (from 2.75%). This along with weaker than forecast coal prices will act as a drag on revenue growth but much higher than expected iron ore prices and higher employment are working in the opposite direction and so the surplus projection for this year may actually be revised up slightly to around $9.5bn (from $7.1bn) with subsequent years’ surplus projections expected to be little changed. This may provide some scope for additional fiscal stimulus to be announced in the May Budget focussed around bringing forward at least some of the already legislated 2022 personal income tax cuts. However, the recent run of weak economic data does not appear to have been bad enough to move the Government to announce a significant new fiscal stimulus just yet. Rather the MYEFO is likely to emphasise the bring forward of infrastructure spending and extra drought assistance, although in total its small at just 0.1% of GDP for the year ahead.

The minutes from the RBA’s last Board meeting are likely to repeat that it remains open to easing monetary policy again if needed but will “monitor developments” given the “long and variable lags” of monetary policy. With economic conditions likely to remain weaker than the RBA is assuming leaving it far away from meeting its goals we remain of the view that, in the absence of a significant further fiscal stimulus in the MYEFO, it will cut rates further early next year. On the data front expect to see another rise in housing finance commitments (Tuesday), continued softness in skilled vacancies (Wednesday) and a 17,000 gain in employment (Thursday) for November but with unemployment remaining unchanged at 5.3%. Demographic data (Thursday) for the June quarter is expected to show continuing strong population growth of around 1.6% year on year led by strong levels of immigration.

Share markets are still vulnerable to short term volatility around trade, Iran and US politics but we are now entering a period of positive seasonality with the Santa Claus rally often seen from mid-December. More fundamentally shares remain cheap against low bond yields, global growth is expected to improve through next year and monetary policy is easy all of which should support decent gains for shares on a 6-12 month horizon.

Our base case remains that the $A still has more downside to around $US0.65 as the RBA eases further. However, with the US dollar looking like it may have peaked and given excessive $A short positions there is a risk that we may have already seen the bottom (at $US0.6671 early in October).