Investment markets were whipsawed over the past week by conflicting reports regarding prospects for the latest US/China face to face trade talks in Washington on Thursday and Friday, with optimism prevailing later in the week. US shares still fell but Eurozone, Japanese and Chinese shares all rose. Australian shares also rose led by health, telco, IT and industrial shares. Trade talk optimism also pushed bond yields higher and oil and metal prices up, although the iron ore price fell. The Australian dollar rose slightly as the $US fell.

Make or break US/China trade talks. President Trump’s latest comments that “they want to make a deal” and that the talks are going “very well” don’t really instil a lot of confidence given he has said them before in relation to previous failed talks! However, this time around the pressure for some sort of trade deal – from deteriorating US and Chinese economic growth prospects and rising recession risks in the US, China’s need for some US agricultural products & President Trump’s desire to sell them, and Trump’s desire to announce a win in the face of impeachment pressure – is intense. The two sides are too far apart to announce a comprehensive deal so the most likely outcome is some sort of mini deal where for example China buys US agricultural products, makes some commitments around IP protection and agrees to some sort of currency pact in return for the US suspending the October 15 and December 15 tariff hikes and relaxing some trading bans. If this transpires along with a commitment to work towards a comprehensive agreement over time then it would take some pressure off the global economy and would come as a relief to investors but is unlikely to see a big rebound in share markets as uncertainty around trade will remain high.

Meanwhile, President Trump’s tweet rate has gone through the roof over the last month with 797 in September – a rate of 26.6 tweets per day – which may be a sign of rising pressure on the President! 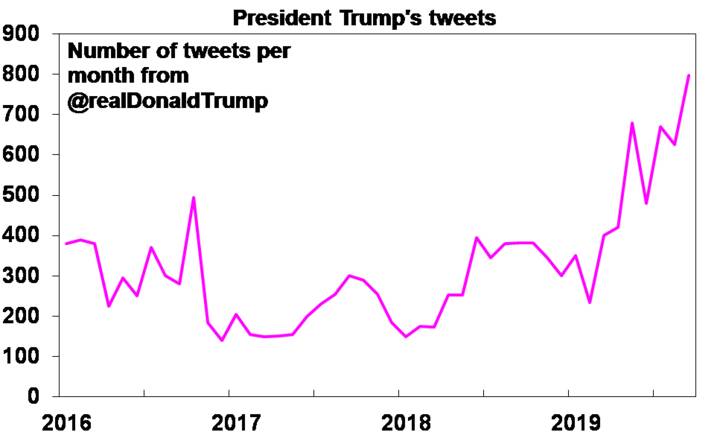 Fed on track for more easing and a resumption of balance sheet expansion. Comments by Powell were notably dovish characterising the current period as a mid-cycle slowdown but noting that the Fed is data dependent with “a healthy dose of risk management.” He also made no effort to push back against market expectations for further easing and said that he wanted to see inflation “moving symmetrically around 2%” which sounds like Australia’s approach to inflation targeting. Its all consistent with another Fed cut on the way later this month. What’s more Powell confirmed that the Fed will soon resume allowing natural growth in its balance sheet by buying short term Treasury bills to help avoid problems in the short-term money (or repo) market as seen lately. This is not QE or additional monetary easing – but some may see it as such.

Possible progress on a Brexit with the UK and Irish PMs reportedly seeing a pathway to a deal on the “Irish backstop”. Time will tell. Most commentary around the so-called Irish backstop is very confusing. The problem is that to preserve the integrity of the EU customs union either: (1) all of the UK needs to remain in it, (2) all of Ireland needs to remain in or (3) a hard border is put up between Ireland and Northern Ireland. Brexiteers don’t like option 1, option 2 would break up the UK and is not liked by Northern Ireland unionists and option 3 would take Ireland back to the “the troubles” and is not supported by Ireland and the EU. But if there is no agreement on how the border between Northern Ireland (ie the UK) and Ireland (ie the EU) is treated then a transition deal (that sees the UK retain existing relations with the EU through an up to three year transition period after which a final solution is worked out) won’t be reached and there will be a no-deal Brexit which would mean an abrupt end to free trade between the UK and EU which in turn would be a huge blow to the UK economy given 46% of its exports go to the EU. The current deadline for Brexit is 31 October but if a deal is not reached and ratified by 19 October then the UK parliament has required PM Johnson to request another extension which probably means a new election or maybe another referendum. Either way a no deal Brexit is looking unlikely.

In Australia, debate about whether the RBA will or should do quantitative easing is hotting up. Our assessment is this. First, achieving decent growth nearer 3%, full employment and the inflation target is unlikely on current policy settings. Second, while rate cuts are having a diminishing stimulatory effect on the economy (as the banks are passing less of them on) it’s still positive and the RBA is likely to want to exhaust them before it moves onto unconventional monetary policy. This probably means cutting to 0.25% (with another cut next month or December and then another in February). Third, there is little point going to zero or negative as banks won’t pass it on and it will just scare people but the RBA likely will tighten its forward guidance along the lines of “we don’t plan to raise rates until inflation is approaching 2.5%”. Fourth, fiscal policy should be eased with a roughly 1% of GDP package focussed on investment allowances, a bring forward of infrastructure spending and support for households but this may take a while to come through. So, in the meantime the pressure will remain on the RBA, which is likely to respond early next year with a quantitative easing program which will involve using printed money to buy government bonds and private securities. This is not ideal and its boost to the economy will be limited as Australians borrow based on short term rates whereas QE will depress long term yields. But the RBA has a mandate and its not to do nothing. Ideally fiscal stimulus and QE should be undertaken together, with the former providing a more assured and more equitable boost to growth and the latter helping to shore up inflation expectations. (Note that the provision of cheap funding to banks from the RBA in the event of a financial crisis is a form of QE but it’s not really an issue at present as banks are not facing difficulties in terms of funding – but it may be a way for the RBA to ensure that cash rate cuts are passed on to lower mortgage rates.) 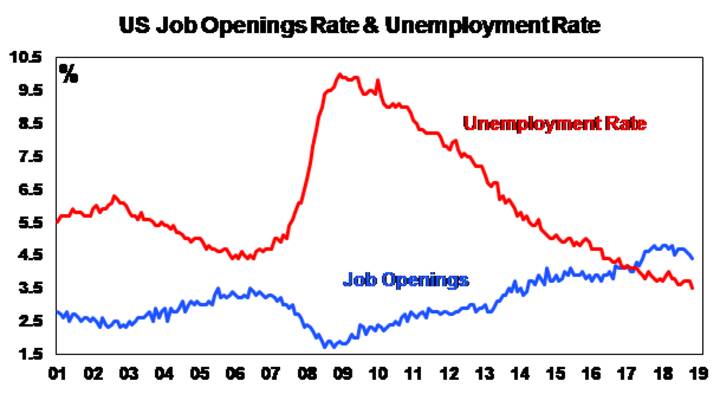 Japanese data showed continuing weak wages growth, but a better than expected rise in household spending and a rise in economic confidence.

Australian economic data was a mixed bag. On the on hand economic confidence was soft with a further slight fall in business confidence according to the latest NAB business survey and a sharp fall in consumer confidence to its lowest since 2015 according to the Westpac/MI consumer survey. News of rising unemployment, talk of recession, slow growth, global weakness, share market falls and rising petrol prices last week when the survey was taken probably all weighed on consumer confidence. ANZ Job Ads rose slightly in September but this was after a sharp fall in August & they are down 10.4% from a year ago consistent with slower jobs growth ahead. 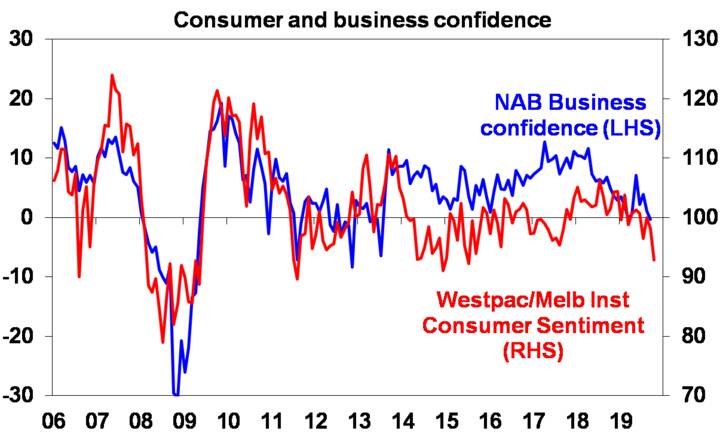 Against this, housing finance commitments continued their recovery in August with a strong rise in investor finance adding to evidence from clearance rates and sales of an upturn in the property market. However, once again it looks pretty narrow led by NSW and Victoria and our view remains that after an initial bounce the property upswing will be constrained by still tight lending standards, a large backlog of new units yet to hit the Sydney and Melbourne property markets, weak economic conditions and now poor consumer confidence. Dwelling commencements rose slightly in the June quarter but given the continuing decline in building approvals are set to resume falling for the rest of the year.

On balance, this is all consistent with the need for more policy stimulus ideally from fiscal easing but most likely in the near term from the RBA.

The big focus in the week ahead will no doubt be on the outcome from the latest trade talks between the US and China.

In the US on the data front, expect a solid rise in September retail sales and continued strength in home buyer conditions (both due Wednesday), a slight pull back in housing starts (Thursday) but after a very strong gain in August and a small fall in industrial production (also due Thursday). Manufacturing conditions for the New York and Philadelphia regions will also be released. The September quarter earnings reporting season will kick off in the week ahead with consensus expectations for a roughly -3% year on year decline in earnings per share led by energy, materials and tech stocks with revenue growth of roughly 3%yoy.

Japanese core inflation for September (Friday) is expected to remain soft at around 0.6% year on year.

Share markets remain at risk of further falls and volatility in the months ahead given unresolved issues around trade and Iran, impeachment noise and weak global economic data. But valuations are okay – particularly against low bond yields, global growth indicators are expected to improve by next year and monetary and fiscal policy are becoming more supportive all of which should support decent gains for share markets on a 6-12 month horizon.

The election outcome, rate cuts, tax cuts and the removal of the 7% mortgage rate test are driving a rise in national average capital city home prices led by Sydney and Melbourne. But beyond an initial bounce, home price gains are likely to be constrained through next year as lending standards remain tight, the record supply of units continues to impact and rising unemployment acts as a constraint.