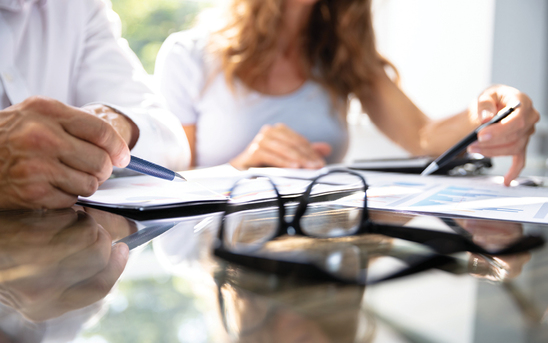 How Much Superannuation is enough?

When you plan for retirement you will probably develop a financial plan intended to increase the amount you have for retirement. If you are on an average wage of about $85,000 p.a. before tax, you’ll need to save about 15 to 20 times that amount for retirement – about $1.3 to $1.7 million at today’s prices. You’re probably nowhere near that.

There are other ways of estimating what you may need for a ‘comfortable’ retirement. It’s estimated to be about $43,255 p.a. at today’s prices if you’re single and $61,061 p.a. for a couple.i If those estimates are accurate then the current amount of Age Pension, $24,081 for singles and $36,301 p.a. for couples (current rates until September 2019), will just act as a thin safety net for most people.ii

The reasons to start building your retirement-savings as early as possible are:

This combination of these three reasons will allow you to build retirement savings faster. If anything happens prior to retirement, such as permanent disability or death, the superannuation fund can provide benefits to you or your dependants. There are many ways to calculate the amount required after you have estimated your income and expenditure during retirement.

Let’s say you are 57 and your partner is 54, you both intend to receive a ‘comfortable’ amount in retirement, which is about $60,000 after tax. At those ages it could be expected that on average you will both live into your mid-80s or later. In addition to that information, it is reasonable to assume that:

While these assumptions may be considered unusual in the current economic environment of low inflation and low interest rates, we are considering a long-term horizon of 40 years or even longer.

Using these assumptions, it is estimated that the total amount required in today’s money is slightly over $1.1 million. Now that we have estimated how much is required, we need to work out how it can be accumulated. Important considerations are how determined you are to save for retirement, the benefit of compound interest and the age you start saving. Let’s have a look at the difference if you started saving for retirement at 20 and if you didn’t start until you reached 50.

If you commence saving for retirement at 20 then, to accumulate about $1.1 million, the amount contributed each year would start at about $4,700 p.a. If you were 50 when you started saving your contributions would need to start at around $145,000 p.a.

The advantage of contributing if you started at age 20 compared to age 50 can be illustrated in the two following tables. The tables show how much of the final amount accumulated in super will be made up of contributions and income earned on those contributions while they are in the fund. Starting at age 20 means a greater proportion of the final benefit will be earned from income on investments. 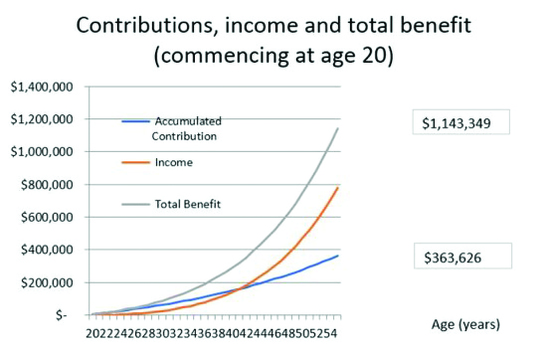 The following chart illustrates the amount of contributions and income earned if commenced contributing at age 50 until retired at age 55. 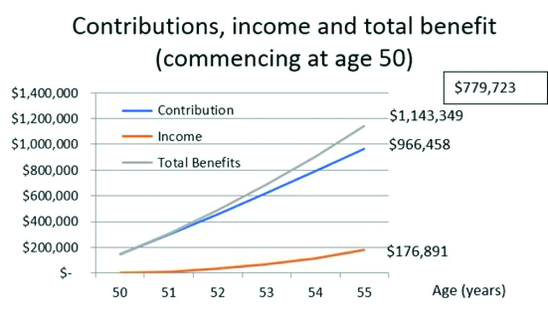 When will the money run out?

The hardest question to answer after you retire is, how long will your super last. This will rely on the assumptions you use to maintain your standard of living. Whatever your assumptions the amount accumulated may still not be enough for you and your partner to live on.

Many factors influence how quickly the amount you’ve accumulated in super may reduce unexpectedly due to emergencies or market forces. They could include withdrawing an unexpected lump sum soon after commencing retirement or to pay for age care accommodation or other health needs. There may also be significant long-term changes to rates of return on investments or inflation may nibble away on the value of your super.

It is possible that you or your partner may die earlier than expected, leaving your remaining super to your surviving spouse of other beneficiaries. The amount required to live on and the timing of the payments is not easy to predict. From the above charts it is estimated that to retire with a comfortable retirement you would require about $1.1 million which would allow a couple to withdraw $60,000 p.a. (indexed to CPI) from super in the first year after retirement.

In any case, an attempt should be made when you are in accumulation stage to estimate the cost and likelihood of such events. In some situations, it may be necessary for you to obtain additional amounts during retirement such as accessing downsizer contributions from sale of your home or qualifying for social-security benefits.

Let’s look at three following situations that could be encountered to see how long the estimated amount saved at retirement would last:

The next chart illustrates the expected retirement based on the original plan to receive a pension of $60,000 p.a., indexed to the CPI, and payment of a reversionary pension payable to the surviving spouse for their life expectancy. 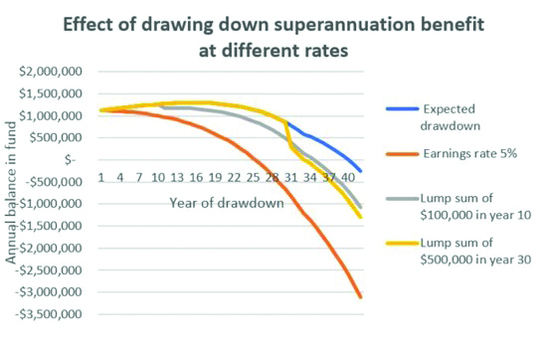 The above chart illustrates the greatest decrease in the balance year by year results from the reduction in the net long-term earnings rate from 7% p.a. (as in the original plan) to 5% p.a. This means that, by the 25th year after a person’s retirement, there will be nothing left in superannuation as the retirement will not be matched by the expected long-term investment earnings. If $500,000 is drawn down in the 30th year, the amount in superannuation would run out in year 33. If $100,000 is withdrawn in year 10, the amount accumulated would last to the 35th year.

As you can see, estimating the amount required for retirement, how it is expected to be drawn down and what really happens can be completely different. However, what you should be doing is regularly reviewing the plan, possibly with the help of independent advice, to reduce the risk of experiencing unexpected surprises.